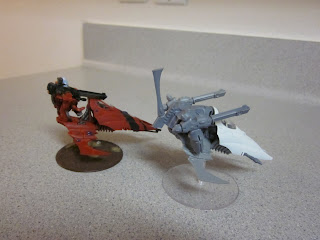 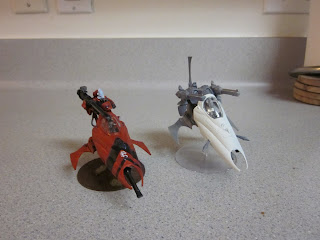 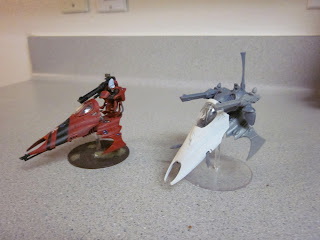 The Saim Hann Krait is a more heavily armored version of the Vyper. Boasting two primary armaments, both controlled by the pilot, the Krait sacrifices some of the Vyper’s speed and agility for additional firepower. The Krait’s guns are mounted on twin vertical engines that allow the vehicle to hover and pivot in place while unloading salvoes of withering heavy weapon fire into fixed enemy positions. Shock poles extend from either side of the front fuselage, creating a coruscating arc of energy that prevents the Krait from becoming easy prey to short range enemy assaults.

I always wanted War Walkers for my Saim Hann warhost, but for some reason those big ass legs just seemed off mixed in with all my cool jets. So after staring at a spare War Walker and Vyper for a few years, I mashed up the two and made a more appropriate gunship for a decent counts-as. Of course it's not exactly convenient to have to get two models just to make one.

And yeah, I just picked a random poisonous snake name. Fiction, it's just that easy.

And it looks pretty cool too! He had been talking about making this conversion for a while. I am glad it turned out so well.

Is there any chance we can get some shots from the back and top of the Krait? That thing is awesome. Better then the vyper!!!

I am glad it turned out so well.. So cool stuff.

How nice to see something interesting.