Played in a 2000 point tournament Sunday with my newly improved Saim Hann. Here was the army: 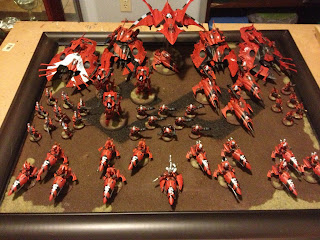 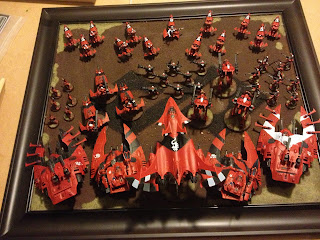 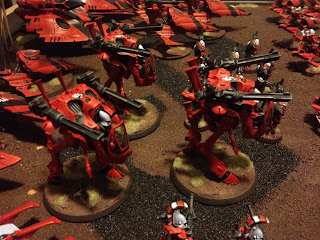 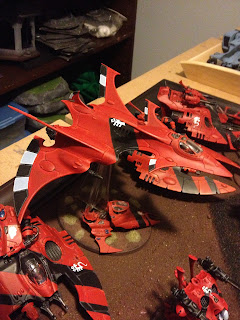 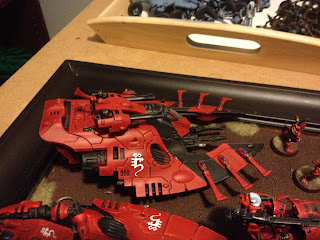 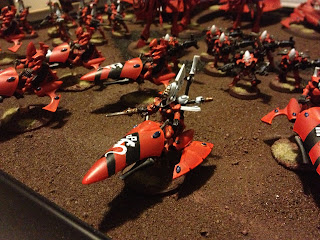 GAME 1 - Eldar
Missions: The Scouring and Purge the Alien
Deployment: Hammer and Anvil 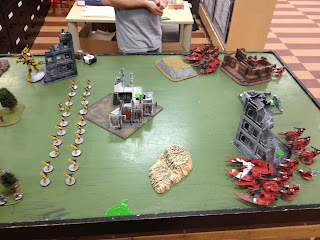 JR was playing his awesome Iyanden army, with Baharroth, a shadowseer, 2 squads of 10 swooping hawks 2 squads of 10 wraithguard, a wraithlord, a wraithknight, 6 or 7 rangers, and 5 or 6 dark reapers. Getting first turn was a big deal with this game - otherwise I have no doubt that the reapers would have had their pick at wrecking much of my stuff. As it turned out, I got to fire the initial volley and wipe them out right away. After that, I suffered fairly minimal losses (2 of the war walkers, a couple of jetbike squads, maybe one of the fire prisms) and managed to wipe out all he had. The wraithknight and wraithguard suffered particularly from bad save rolls, but with hammer and anvil, I also had the advantage of range, firepower, and speed. I got full points. 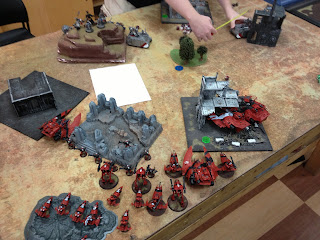 As usual, Matt played his grey knights with great skill. He had an inquisitor, 2 dreadknights, 5 or 6 paladins, 3 10 man strike squads in rhinos, a small deep-striking strike squad, and a psyfleman dread. He rolled to place terrain and objectives first, and since there was only 3 of them, that meant I had one in my deployment zone, and he had 2. I was thankful to have the extra distance to back up in the vanguard deployment. I held my right flank with the wave serpents in ruins. Everything else tried to keep distance and shoot anything that came from behind the big line-of-sight blocking hill he deployed. He rolled for first turn and gave it to me instead. I immediately wrecked the dreadknight with somewhat lucky fire prism shooting, and took out one of his rhinos on my left with wave serpents. He responded with decent counter fire, frying a vyper and one of my fire prisms. I slowly wore down the inquisitor and paladins with the warp spiders and Crimson Hunter. As for the dreadknights, I only put one wound on one of them in the crucial early turns, and they were able to toast a couple things before they got close enough to take down with mass shuriken and laser fire. I killed everything he threw at the relic, and our last turn came just as time was running out. He wouldn't have made the distance with one of his surviving strike squads if I hadn't killed just enough of them to break them, sending them back towards his table edge, allowing them to regroup in his last turn, and take the 9" move towards the center. He also had just enough to take his home objectives, so he won 17 to 8. Good game. 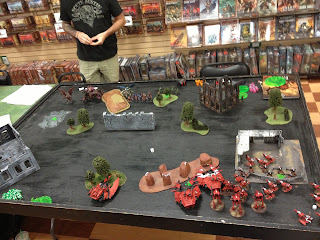 Wouldn't you know it, I was paired up against "Yolandi" Hart in my last game. He had a bloodthirster, lord of change, skulltaker and several khorne heralds on juggernauts, karanak, a big squad of daemonettes, 2 squads of plaguebearers, a daemon prince, and a tzeentch soulgrinder. Again, going first worked out very well for me - though this time I got it through seizing the initiative! Ouch. I destroyed the daemon prince right away, and put the hurt on his nurgling squads. He outflanked the juggernauts and karanak right into my red pointy castle, but unfortunately for them, I had wiped out all other proximal threats. This allowed me to have just enough shooters available to wipe out the khornestar before they could do anything back to me. I won with 22 points, which ended up putting me ahead of Matt for first place.

My opponents were all great and I had a blast blooding my freshly painted wild riders (with many lucky breaks helping me out along the way). Thanks Chris for running the dang thing.
Posted by bullymike at 9:00 PM

That army is looking sweeeeet!

Did you know that you can create short links with AdFly and make cash for every visitor to your shortened links.