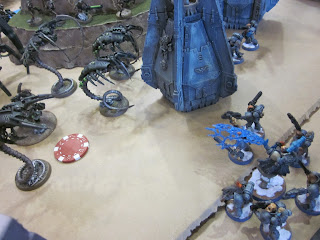 Last weekend I played in a 7-game 1850 GT in Watauga near Fort Worth. I went 5-2 with both losses against goddamn noisemarines! Boo. Hate those guys. 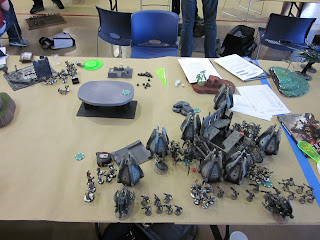 First game was against a guy named John, playing a drop pod space wolves list. I nested up on the right half of my deployment zone and spread out my models to try and buy myself some room to breathe. Luckily I rolled well on my initiative tests when his rune priest dropped in and went after my destroyer lord and wraiths, only losing one and a warrior. After my first return volley, I tied up the biggest surviving squad on the right with the wraiths, the squad on the left with the destroyer lord, and charged one in the middle with the stalker. I don't remember him penetrating the quantum shielding with shooting, but maybe he did; in any case, the stalker somehow died in combat against guys armed only with krak grenades. The destroyer lord challenged and killed a few characters at a time, while I tried to diminish as many squads as possible with gauss and tesla. I ended up with only three models left, two night scythes and the destroyer lord, but it was just enough to win the table quarters mission by having more army points in three quarters. That together with the fact that I killed plenty of wolf guard and didn't have any character models to give up other than the destroyer lord, gave me the win for the round for winning two of three missions. 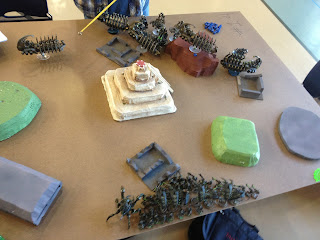 Game two I drew up against Daniel, who was playing with two command barge lords, a bunch of min squads of warriors in ghost arks, three annihilation barges, three squads of single tomb blades, with storm crypteks attached to each warrior squad. A bloody game that went back and forth with luck on both sides, but the destroyer lord resurrected twice and that more or less kept the win in my hands. 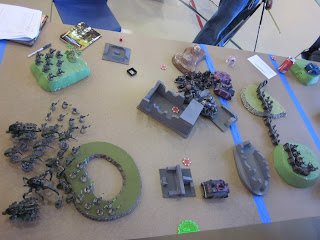 Game three was against Jared, playing a slaanesh-heavy army witha big bike squad and lord, two maulerfiends, a couple chaos marine squads in rhinos, a cultist squad behind an aegis line, a heldrake, and a vindicator. 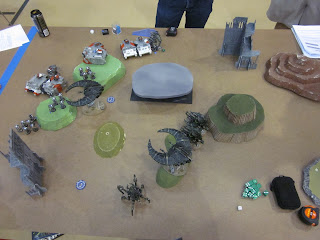 Game four was against a kid I called Mooseport, because he had a big moose on his shirt. He was playing a bunch of purifier spam with a couple psiflemen for backup. He wiped out almost all my infantry, but not before I picked off squad after squad with tesla and gauss. I ended up winning playing the objectives in the end, though it would have been easier if the destroyer lord hadn't bailed after the first time he got knocked down. 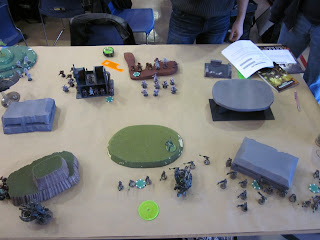 Game five was against Chris from Austin, playing another slaanesh/noisemarine army with a lord and sorceror on bikes, a bike squad, three or four noisemarines squads, a heldrake, and a couple autocannon havoc squads.Turn one he shot up and ran my destroyer lord and attached tesla immortal squad off the board, and froze up my wraiths on turn two long enough to wipe them out. I was able to stabilize the patient long enough to come back, but couldn't grab the win in the end. 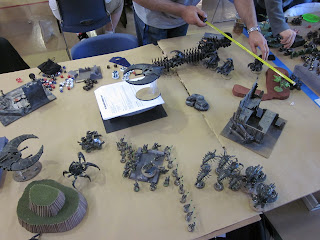 Game six was against a list very similar to Daniel's, with plenty of ghost arks and annihilation barges, plus a couple night scythes, but only one command barge. Before the game while we were chatting, he was saying he was going to keep his royal court together to keep from giving away character points, but then in the game he decided to split them out into the warrior squads and deathmarks. I chose his lord as my hunted unit, and set out to hunt him down and kill as many crypteks as I could. I chased him from my end of the board to his for three turns before he surged forward and tried to break out. He came after my destroyer lord and wraiths with his despairmarks but couldn't deal enough wounds and they died pretty easy. We did damage back and forth, until I shot down the command barge and the lord in one turn, but then he got up and jumped in a nearby ghost ark and ran away to the far corner of the board. I cornered the ghost ark on the last turn of the game, and he jumped the lord out to try his chances in a mindshackle duel. I passed the roll; he didn't, and that was game. 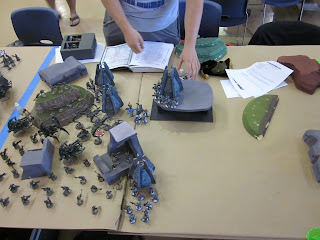 For my last game, I played against another Space Wolf drop pod list, this one with a couple of dreadnoughts joining the gray hunter and wolf guard squads. I placed one of the two objectives in the far corner to try and divert some of his forces and possibly make a move on it later with my scythes and reserve warriors. My destroyer lord was definitely MVP - after losing all his wraith bodyguards to shooting, he jumped into the wolf priest's grey hunter squad. Down went the wolf priest in a challenge to mindshackles and his own force weapon. After he charged a second nearby grey hunter squad into the fray, the destroyer lord survived the first round of punches and I held my breath before he struck out with a couple precision hits and took out both power axes in the fight. Both space wolf squads broke and ran, buying a moment for the destroyer lord to jump back and help out my immortals and warriors. He then scythed down both dreadnoughts in subsequent turns. Shooting from my other squads meanwhile had fended off the rest of his troop units, and the night scythes and reserve warriors came on and took the far objective as planned. A good game against a well painted enemy, great way to close out the weekend.
Posted by bullymike at 11:07 PM

Best part about our game...."So what did you do last night?"

"I was with you Mutha Fucka!"