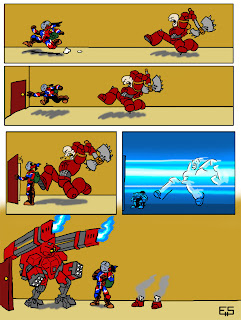 (image by Raax)
After selling my catachans to some lucky club in Florida, I am trying to decide what project to take on next. Over the past couple months, I have worked up an Imperial Fists lists that could use either  the Horus Heresy book or the Space Marine book. Very expensive models but a cool effect and there's plenty of other Heresy players in town.

However, the upcoming Tau release is like a splinter in my brain... I love playing xenos and Tau could be a fresh new game to play for me after playing almost exclusively Necrons over the past year. I also think in terms of my collection, a Tau army could be different than my other armies, both in terms of gameplay (long range shooting, barebones skirmish, finesse synergy) and in the overall aesthetic. I think it would be fun to incorporate a modern camo scheme to them, maybe do the 'snow based' army I have wanted to try for so long.

In the short term, I am planning on selling the Abaddon/Black Legion elements of my chaos army and focusing on the Khorne stuff. I had a few encounters with maulerfiends this weekend that gave me some hope for a crush-rush, and I WANT to play the new chaos book, but the Abaddon/rainbow chosen army just doesn't hit very hard. So going to consolidate.

I played a game with the khorne guys as blood angels last night which should appear as a video battle report on BOLS sometime soon, I'll post a link as soon as it does.
Posted by bullymike at 7:40 AM