After this weekend’s 7-game GT at WarGamesCon, I figured I’d be pretty tired of playing 40k, but I actually feel somewhat invigorated and looking forward to more games. And that’s even after I had a pretty shitty record of 3-4 with 3 donuts. After seeing some of the top table shenanigans, I'm glad I was nowhere near it. To be so supposedly good at the game and then not be able to finish five turns, for shame! The bums lost, Lebowski! The bums lost!

Before I get into it, here’s a slideshow of some cool armies I saw:

I was playing with a slight variation on the list I had won with the week before at Dragon’s Lair. I changed the infernus pistols in my assault squads to meltaguns and used the spare points to give infernus pistols to two of my sanguinary guard. 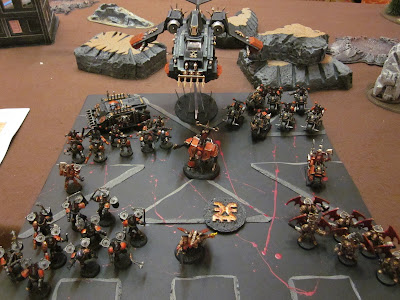 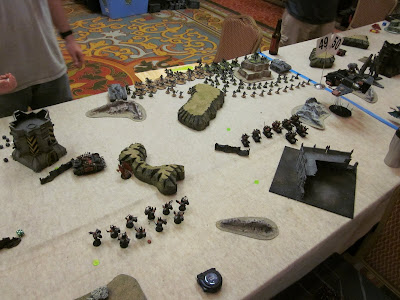 My first opponent Chris was a real nice guy playing with Creed, a couple of melta veteran squads in chimeras, and a couple of 20-man infantry blobs, a lord commissar, normal commissar, priest, and a couple of sergeants with power weapons, and something like 8 autocannon heavy weapon squads. I went first and set up the Sanguinor and my rhino squad halfway up the side of the table with the most objectives. He set up Creed and the infantry squads in rings castled up in the opposite corner. The Stormraven, Furioso, and bike squads charged up one side of the board while my jump pack marines moved up to hang out on objectives behind the rhino marines and Sanguinor. My right side was destroyed pretty early on by a combination of shooting and blob-squad counterassault after a classic front-line sacrifice. I could have played that better and broke left with my bikes and storm raven after the initial push. Also I made the mistake of landing Dante and the Sanguinary Guard in the piece of terrain in front of the left melta vet chimera and the damned priest died to a dangerous terrain test, which reduced their survivability substantially. They destroyed the melta vets but got chewed up pretty badly in return. Dante and the Sanguinor survived to kill plenty of autocannon squads and distract the blob squad towards the backfield. But the key moment happened when he drove up his melta vets on my right side towards the center objective on the next to last turn. They were just in range of my jump pack marines, who destroyed the chimera and survived to stretch over two objectives, while my foot marines stretched out over two objectives and I won 23-7. 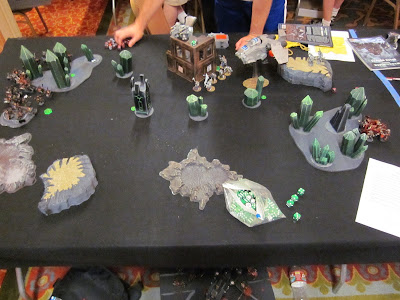 Mike had a Grey Knights army with a grandmaster, a librarian, a big terminator squad, two strike squads with rhinos, three psiflemen, and a stormraven. I set up my rhino marines, jump pack marines, and bikes in my home quarter and moved up to hover behind cover around my C&C objective and a couple of nearby seize ground objectives. I drove my stormraven straight up the middle with the Sanguinor and furioso, and dante deepstruck with a priest and the sanguinary guard on the far right side. I don’t remember exactly everything played out but I do remember rolling very badly the entire game. The bikes and marines on my left took the brunt of his shooting the entire game, and the S8 autocannons negating my FNP but not as badly as I expected. His strike squad rhinos pulled up next to my piece of cover. I pounced with my surviving bikes and jump pack squads but could not break through either rhino with meltaguns or powerfists. My stormraven was brought down by the very first dread to shoot at it, and the furioso was immobilized immediately by his stormraven. The Sanguinor jumped forward and distracted the Grandmaster’s squad, while Dante and the guard took out the small strike squad on the right side fairly easily. If the game had ended on turn 5, I was in place to get the win. As it was, the strike squads jumped out of their rhinos and shredded my left side, while his terminators fought off my right side attack and grabbed a bunch of objectives. We both destroyed each others’ cheapest units, and the game ended with Mike up 30-7. 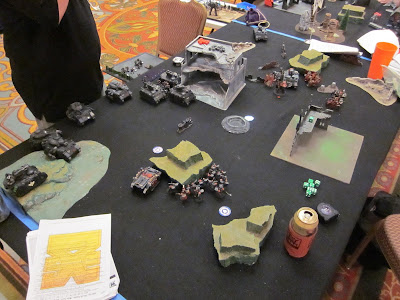 Sean was playing a dark angels-marked mephiston/razorspam list with a second librarian, six small assault squads in las/plas razorbacks, two assault cannon/heavy bolter baal predators, and three autocannon/lascannon predators. This game was really just a pain in the ass. For whatever reason, I didn’t get along that well with the guy, and what a boring army to play against. I hung in there for a while and kept the KP even, but eventually Mephiston and all the mech shooting caught up with me and finished off most of my stuff. I lost 30-0. 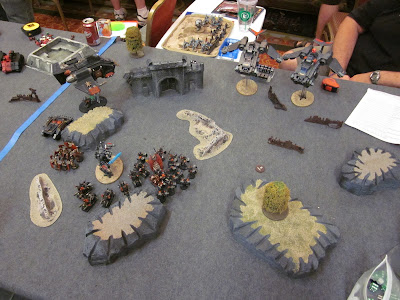 For the fourth round of the day, Jon and I were paired up for almost exactly the same matchup we played the week before at the top table at our monthly FLGS tournament. He was playing with Draigo, Coteaz, DCAs and special weapons troopers in a chimera, 2 squads of loadout paladins, 1 nemesis dreadknight, 1 dreadnought, and 2 stormravens. His dreadknight came in early and I was able to melta it to death with Dante’s squad and my jump marines. We zoomed around playing out the dance of the stormravens until I surrounded Draigo’s whip with the Sanguinor, dante, the sanguinary guard, my jump marines, and the bikes, esploded it, and assaulted the passengers with the whole mess. Once again Draigo and his buds went down in the face of all that skull fever. The furioso and foot marines headed for Coteaz’s posse and eventually took them all down. I don’t remember exactly what happened with his second stormraven, paladin squad, and the dreadnought but they either died or were too far from an objective to matter, and I won 30-0. 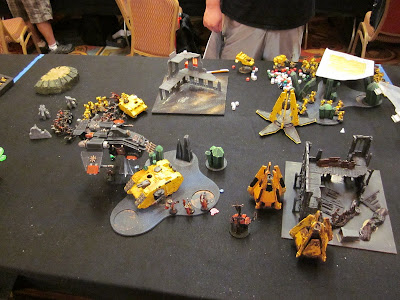 Will was playing a cool Lysander/Tigurius list (they should make a buddy cop movie… Tigurius would be the uptight one. Lysander would call him “Tiggy,” drive a convertible, and maybe have a drooling great pyrenees) that also had five SS/TH assault terminators, an ironclad in a drop pod, a drop pod of sternguard with flamers and combimeltas, a tac squad in a drop pod, a tac squad in a rhino, a MM/HF landspeeder, and a land raider redeemer. I reserved everything but my rhino assault marines. He dropped down with the ironclad near my rhino and immobilized it, put his other drop pod tac marines on top of a distant objective, and charged full forward with his land raider full of terminators. Second turn Dante dropped in, and the rhino marines ran out to surround him and give them a cover/assault save. I managed to immobilize the ironclad and keep him from assaulting me. Then the sternguard and land speeder dropped in right next to that group and dropped four flamer templates on the sanguinary guard plus a bunch of S6 bolter fire. With feel no pain, I resisted most of the wounds. The landraider pulled up and disgorged the terminators and Lysander. Lysander charged into the surviving berzerkers, but the terminators rolled poorly for difficult terrain and got hung up. Lysander killed all of the foot marines except for the super-sergeant (upgraded by the Sanguinor). On my following turn, the bikes, jump marines, and stormraven came in. The bikes zoomed up on my left, while the jump marines, sanguinary guard, and Dante charged into the assault terminators. The Sanguinor charged Lysander, and the furioso charged the sternguard. It was a perfect storm, highlighted by Dante wiping out the terminators single-handedly in one fell swoop. Lysander hung on for one more assault phase, while the furioso chopped through almost all of the sternguard with no problem. Tigurius and the one surviving melta gated right behind the furioso for a last ditch attempt to hurt him, which failed utterly, and he turned around and chopped them down. The Sanguinor, bikes, and jump marines advanced towards his midfield rhino, popped it, and killed the survivorshttp://www.blogger.com/img/blank.gif. The game ended with me up two or three objectives to his one, including the capture and control objective. He seemed to think we could tie the tertiary, and who was I to argue, so the final tally was 26-3. Will was a really good sport about the extreme change of fortunes in the match, hope to play him again.

Bonus spectacle: I looked over at the Dude's game next to me, he had some serious Eldar sneakiness going on... and you should see the jetbike/falcon mating dance he had going later on. 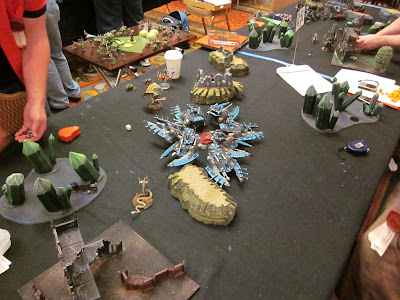 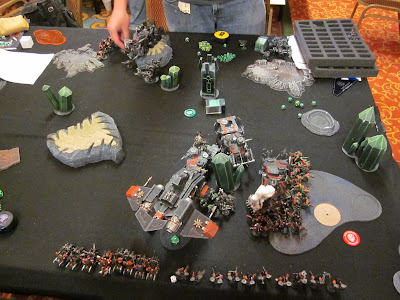 Winning big my first game of day two sent me up near the top of the B-bracket to play against Richard from Wyoming, who was playing with Ghazgull, a big mek, 5 or 6 megaarmor nobz in a battlewagon, 2 17-18 boy squads in battlewagons, a burna mob in a battlewagon, a deff dred with megablasta, and 12 or so lootas. Thas a lotta battlewagons! And true to form, they came right at me. Dawn of War gave me a bit of a break against the lootas, and I dropped Dante and his buddies into his backfield take care of them. They also distracted the deff dread and the burna’s battlewagon. I waited with everyone else in the corner near my home objective, waiting to break hard left when I got the chance and spread his mobs out a bit. Naturally he called the waaagh when he was close enough and did plenty of damage against the rhino marines and jump marines. The furioso counterattacked against the mob on my right and wiped them out in no time. I had immobilized Ghaz’s battlewagon, so he spent most of the game midfield trying to bring down the stormraven in assault, which I believe he finally did near the end of the game. The megaarmor nobz were his real rock stars though, making something like 237 5+ invulnerable saves and holding out against the bikes, the sanguinor, and the furioso for like four turns of assault. If I had managed to wipe them out in the initial assault (like they damn well should have!), I might have been able to regroup, kill ghaz, and possibly recover my deployment zone from the green tide. Instead the nobz wiped out pretty much everyone. Bastards. The deff dread finished off Dante and friends in his backfield after they had wiped out the lootas and burnas. A brutal game, but basically Richard rolled better, bouncing me back to the bottom of the B-bracket. 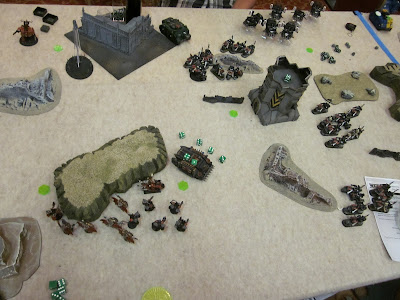 Unfortunately I don't remember my third opponent's name, he was a nice guy from Corpus and I enjoyed talking with him about all the craptastic landmarks in that fair city. His army was tailor made to take mine apart, unfortunately, as all that super-mobile krak missile fire just tore through feel no pain, and I was making shit for cover saves. Also I overextended to the left with the Sanguinor and furioso, and just got played out. Meanwhile, his bikes zipped around and shot me up with plasma guns until there was very little left. I lost 30-0. 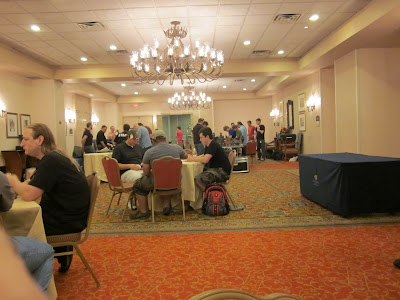 A fairly crappy end to a fun weekend. Definitely will go back next year, providing congress raises the debt ceiling and the four horsemen are kept at bay for just a little bit longer. I'll just be waiting out the real age of strife in my bomb shelter...
Posted by bullymike at 9:07 PM

Great report! Some day may kid will be out of college and I will get to go to one of these.