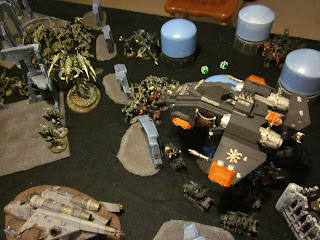 I've played a few more games with the Blood Angels, against my friend Mack's necrons, Brandon's Vulkan marines a couple more times, and then Brandon's tyranids once as well. The necrons went down pretty easily, as they were deployed a little too close and just don't have the firepower to slow the advance of Kharnte's inferno. I won the second matchup against Brandon's marines, and also the subsequent 2500 tie-breaker match. But then against the tyranids I made a couple of key mistakes (using the wrong units to engage genestealers and letting the trygon easily chew his way through the bike squad as well as the sanguinary guard)and lost a 5-objective seize ground game 2-1.

On the modelling front, I made a Sanguinor using the Skulltaker and some old bloodthirster wings, and converted jump packs with old-style tyranid gargoyle wings and a single turbine (to emulate the angel wing jump packs) for my characters and the sanguinary guard.

I was messing around today with the idea of death company and figured out that my entire collection of World Eater models makes a pretty cool 2500 point army exactly, when I use my Sephiro... I mean Astorath... model as a normal jump pack chaplain:

Pretty much a direct assault force, either straight up or focused on a particular flank. Ideally either the bike or assault squad sergeant gets the Sanguinor's blessing. The foot chaplain hangs out with the DC contingent in the Deathmobile, which I can imagine leading the charge with the Sanguinor. I'm very curious as to how the DC dread performs - seems like it could be quite a beast with fleet. Dante and the jump chaplain and priest move up with the sanguinary guard, taking cover behind the advancing assault squad and providing them with furious charge and FNP. The rhino marines are the back of the line, sitting on objectives. It's not a hard boyz army, and is definitely vulnerable to psychic attack, but could still be a lot of fun.
Posted by bullymike at 11:56 AM

So, how did they perform on Sunday?

Hi, I came across your site and wasn’t able to get an email address to contact you. Would you please consider adding a link to my website on your page. Please email me back and we'll talk about it.