The Guillotine had their battlefield debut last night against my buddy Brandon's Void Dragon (vanilla) space marines. We rolled for a spearhead killpoints matchup, and I won the roll to go first. I decided to use the list I've described, but to drop a few marines from one assault squad and add in a jump pack chaplain. I joined Dante, the chaplain, and the jump priest to the jump assault squad, and threw the large foot assault squad, foot priest, and furioso in the storm raven. I had decided that I'd deep strike more if I got second turn, but when I got first, I just decided to group everybody together at the front line and go for the throat: 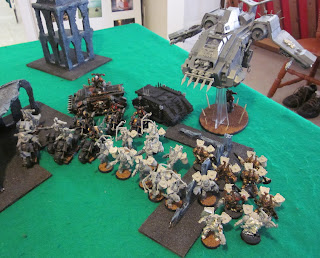 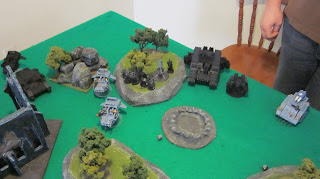 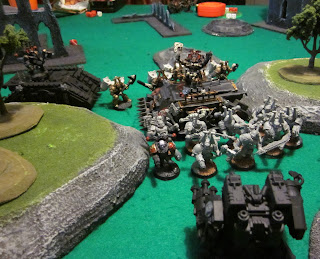 I moved forward first turn, shot the storm raven at one of the land speeders and stunned and immobilized it. In return, he exploded the storm raven and put a bunch of wounds on the assault squad with the thunderfire. Feel no pain helped, but not all that much. The jump priest died in the initial barrage, too. If I'd have deep struck the assault squad, they would have only had to weather one turn of shooting before getting to assault. As it was, the terminators jumped into them the next turn and wiped out the whole bunch with no trouble at all. Dante needs to stay away from thunder hammers!

We traded punches for the rest of the game. The furioso dropped a second land speeder and a scout squad before getting rended by a land speeder assault cannon. My foot assault squad and the sanguinary guard wiped the terminators with shooting and furious charge, dropped the ironclad with infernus pistols, but were then blown out of the woods by combined shooting from Brandon's whole army. The bikes chopped through one scout squad, then took off across the battlefield to run down one of the combat squaded tac units. The game ended on the 5th turn with Brandon up 9-8. A very bloody game! My MVP was probably the foot priest who enabled his squad and the sanguinary guard to kill the terminators.

Any advice on using the storm raven or deep striking with blood angels in general?
Posted by bullymike at 6:33 AM

Hey, Trying to figure out how you work the list... 3 priests, the jump pack one goes with either the jump assault squad or the sang. guard... the bike priest with the bikes, but what does the 3rd one do? Just hang out in the Stormraven and go where he needs to?

Yeah pretty much. For this game he attached to the foot assault squad in the storm raven. I found he was useful later when the jump priest had been killed and the biker priest was busy with the bikes in another portion of the battlefield. I think I should have used them to bait out the terminators instead. Assuming Brandon would have bit, and he probably would have since they could have turbo'd right in front of several relatively helpless squads, i could have charges into them with the super jump unit, instead of getting myself charged and wiped. IIRC I was worried about the dreadnought tangling up the bikes instead, when I should have just said fuck it.

I think Dante is WAY overpriced... I would definitely go with Astorath or even just a Libby (or another normal chappy if you're going for fluff). You could really use some psychic protection, especially against grey knights. If you can stop hammerhand even 50% of the time, its a good time for you.

And TH/SS Termies are probably (definitely) better than sang guard, but no where near as cool...

Yeah Dante not having eternal warrior is kind of a gip, but i like his super death mask, tactical precision, and hit and run abilities. I have considered making some assault termies for a future project, with 3 TLC and 2 ss/th, jumping out of the storm raven with priest and chaplain, but I agree the guard are cooler. With furious charge they arent too bad, but if they don't wipe out their opponents power weapons/fists, theyre pretty much toast. I am excited to try out a few different unit/deployment combos before I give em up. Too bad BAs dont have a cool terminator boss!