The ambush elements of the Catachan XIV were dug in along their front line, each man scanning the horizon for any indication of the enemy. It was still dark and despite their sharp, battle-hardened eyes, there had been no contact as of yet. Still, details were hard to pick out in the distance, and the guardsmen could not shake the feeling that they were being watched. When a private from bravo squad's head suddenly exploded without warning, a different feeling entirely surged through the men of the Fighting Fourteenth. Bravo squad hit the dirt while the other units squinted into the darkness, still unable to find a target. An orange glow slowly suffused the skyline and the air in the valley grew palpably warmer, as if heated by the fires of some hellish forge. A horrible alien battlecry pulsed over them - through them - and each man felt the rise of terror in their guts. The Eldar had returned to Tra-El in force and with sinister purpose. Would reinforcements arrive in time to save the failed ambush? 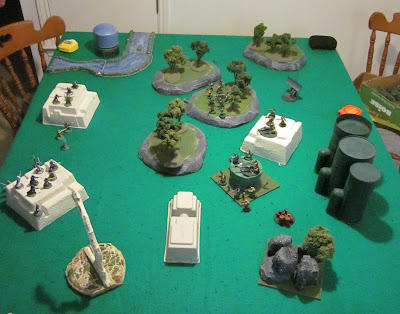 Shaun and I played a 2000 point dawn of war annihilation matchup that turned out to be a blast. I was playing with a command HQ in a chimera with 2 plasma guns and a lascannon, a lord commissar leading 5 ogryns in a chimera, Harker veterans with 3 grenade launchers and an autocannon, an infantry platoon consisting of a command squad with 4 flamers and three grenade launcher/autocannon infantry squads, a missile launcher squad, a mortar squad, a vendetta, 3 scout sentinels, a hellhound, a manticore, a medusa with camo netting, and a leman russ with heavy bolter sponsons and a pintle heavy stubber. Shaun's Eldar consisted of Radeld Ranulth (Eldrad), 5 warlocks including 3 with destructor and 3 with spears and embolden, the Avatar, 6 wraithguard, 2 squads of 8 pathfinders, a squad of 5 dire avengers, 10 warp spiders including an exarch with twin power blades and withdraw, a falcon with a scatter laser, and 3 war walkers with scatter lasers and rocket launchers. I rolled to go first, but Shaun seized the initiative and just like that, the hunters became the hunted! 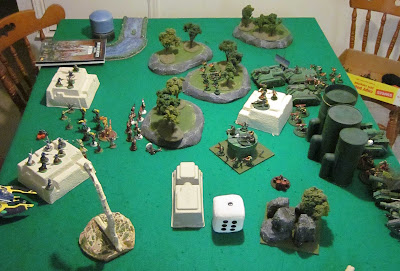 Shaun moved up the rest of his forces to support the seer council and pathfinders that had started on the board. The pathfinders picked out a guardsman dug in around the bunker and sent the squad to ground. The warp spiders teleport up and form the eldar front line. I also moved up my firing line and tried to put some heat on the warp spiders. A blast from the leman russ drops a single warp spider. 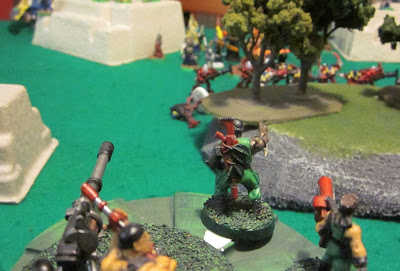 Despite being pinned, sergeant Taylor of bravo squad picks out movement behind the forested hill in the distance and manages to direct ordnance fire. Unfortunately, thick cover reduces the effectiveness of the barrage and only one of the loathsome aliens is brought down. 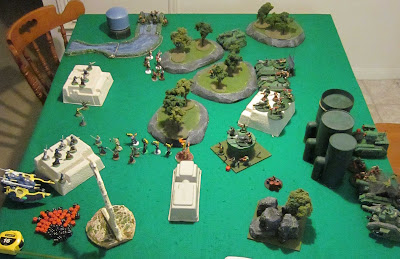 Radeld and his buddies fortune up the warp spiders and guide the pathfinders. The warp spiders teleport forward and combine fire with the two pathfinder squads, reducing the guard infantry squad to two pinned guardsmen who continue to survive all kinds of fire for another turn. The Avatar and wraithguard kill a couple from the other guard squad. In return, my command HQ lights up the avatar with plas and las fire but inflict only 3 wounds, just short of killing the ancient demon. My missile launchers join them on high ground. The hellhound covers the warp spiders in burning fuel and the manticore drops a single rocket blast on them, but the prescience of their thrice damned farseer allows them to survive relatively unscathed and only one dies. Harker and his squad come wading up the river on my right and pour fire into the spiders as well, but the alien magicks are strong and no further casualties can be inflicted. 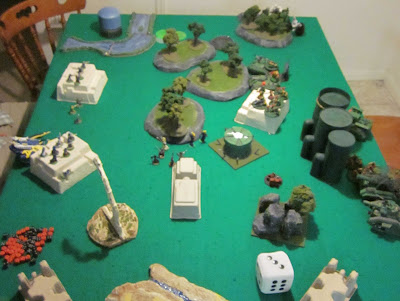 The mighty avatar storms the bunker and wipes out the infantry squad there, while Radeld and the seer council approach behind him. My right flank is threatened when war walkers sneak onto the field and tear into the back of the hellhound with rockets and laser fire, causing a catastrophic explosion. Thankfully, noone is near enough to be hurt by the blast. The warp spiders react to the veterans on their own flank and wipe them out in assault after some softening up. I had a big turn as well: the Avatar was finally brought down in a hail of krak missiles, and the command HQ combined with my ordnance to kill more than half of the wraithguard. My sentinels came in on my right and attacked the warwalkers, bringing two down with their multilasers and emu-kicking the last one down in assault. I also finished off the warp spiders with manticore, mortar, and chimera fire, and killed one of the warlocks hanging out with Radeld. In the haste to join the fray, the ogryn's chimera threw a track and got stuck at the base of the hill. 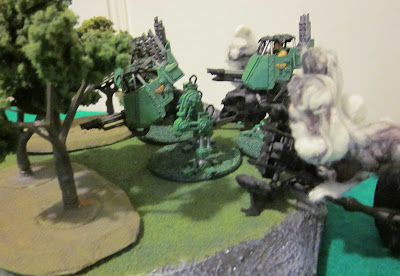 After days of hunting the eldar walkers through the thick forests of Tan-El, the scout sentinels made their way to the front line, stepping gingerly through the smoking wreckage of their prey. Unfortunately, the attack came too late to save their brothers manning the hellhound. 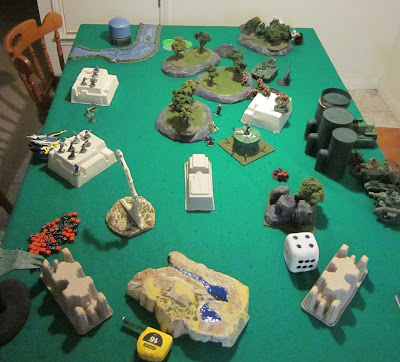 The wraithguard destroy the ogryn chimera, wounding one of the big lugs in the explosion. Radeld and his crew have a big turn and wipe out the command HQ and one missile launcher team with destructor fire and the bale energies of an eldritch storm. The sentinels, chimera, and ogryns return fire and reduce the wraithguard to a single alien ghost zombie. Marbo emerges from his hiding spot atop the wrecked bunker and hurls a demolition charge into the eldar seer council, killing two more of the pointy-eared bastards. Finally, the vendetta emerges on my left flank and hurries towards the eldar firing line, missing a lascannon shot at the falcon on the way. 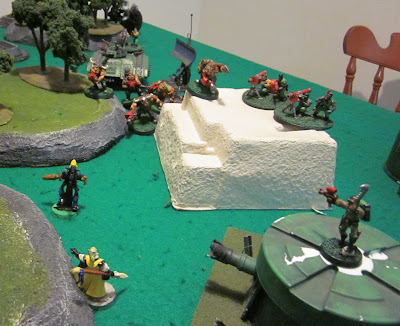 Marbo lay flat and completely still on the roof of the burned out bunker. Hidden amongst the blackened corpses of his fallen brothers, he watched and waited as the enemy approached. The alien witch was only 6 paces away now. Slowly engaging the primer on his detpack, Marbo flexed his muscles and prepared himself once again to make what was likely to be his last living act. 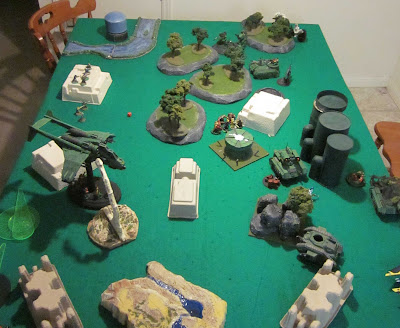 As is wont to happen in the late stages of a game, I rushed from the 5th turn into the 6th and forgot to take a picture. Radeld joined the wraithguard in shooting at the ogryns, to little effect, while the destructor warlocks had themselves a little Mar-b-que. The falcon zoomed forward and the dire avengers disembarked on the next turn, lighting up the mortar squad and killing 2 of the 3 teams. Pulse laser fire from the falcon destroyed the leman russ' battlecannon. The lord commissar and ogryns charged into Radeld and the last wraithguard, but the combat was largely a draw over two turns before the game ended. The vendetta brought the platoon command over next to one of the pathfinder squads, and they promptly immolated them on the spot with combined fire from their flamers. Unfortunately, the lascannons on the vendetta could not find their mark on the eldar skimmer across the table. The medusa was of little help as well, only managing to destroy the tank's pulse laser. Having exhausted its missile supply, the manticore rushed forward and flamed the dire avengers to death. Shaun wins the epic match by 3 killpoints! 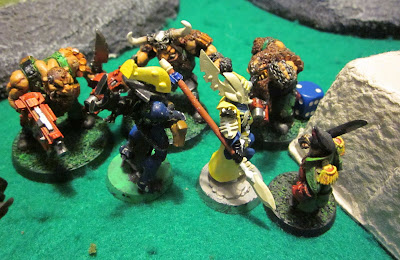 As the enemy drew near, Commissar Lenck bellowed the signal to attack and his ogryn kill team roared in answer, the lot of them charging forward out of the wreckage of their former transport. Despite outnumbering them two to one (and probably moreso considering the substantial girth of the ogryns), the assault seemed to falter immediately. Lenck himself struggled to engage the enemy witch, but his sword and powerfist could find no mark as the alien always danced sideways or backwards in time to avoid his attacks. Similarly, the punishing blows from the ogryn bashers seemed to have no effect on the eldar wraith construct, their oversized fists glancing harmlessly from the loathsome creature's thick armor. Then, in a flash, the aliens were gone from the battlefield, leaving only the sounds of groaning men and the smell of burning wreckage. The Catachan ambush had failed, and the Fourteenth had suffered significant losses. Could they recover in time to defend the colonies on Tan-El from what would in all likelihood be a future of unending, uncomfortable, and embarrassing eldar butt probes?

DUN DUN DUN
Posted by bullymike at 7:52 AM

My name is Kirsten Williams and I work with content for calculatem.com http://www.calculatem.com/ . We are now conducting a campaign towards blogs and for that reason, I am trying to get in touch with the person in charge of content and ads primarily on blogs.

Is that you, or is there someone else I should speak to? Thanks for your time.

My name is Kirsten Williams and I work with content for calculatem.com http://www.calculatem.com/ . We are now conducting a campaign towards blogs and for that reason, I am trying to get in touch with the person in charge of content and ads primarily on blogs.

Is that you, or is there someone else I should speak to? Thanks for your time.

Did you know that you can shorten your urls with Shortest and get cash from every visitor to your short links.