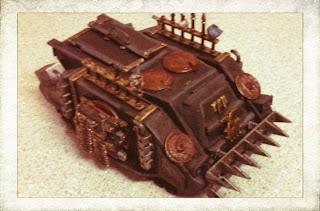 After some deliberation, I've decided that my champion model would better represent Dante than the Sanguinor, and I'd love to make my Skull Brethren a scoring unit anyway. I'm going to try to find a better model to represent the Exsanguinator. As a side note, I think the marine Khorne Lord would make a good Astorath once you put a jump pack on him.

On a related note, I've ordered a bunch of the MaxMini jumppack bits for all my jump units, as I think they would look cool and I was too lazy to try the pen method, as awesome as those are.

And I've decided that instead of icon bearers, I'm gonna represent my Sanguinary Guard with Berzerker champions bearing those molded skull axes that look so awesome - surely bone carved from the skull throne itself would drive any nearby khorne devotees so mad with bloodthirst as to provoke them into crushing assaults and ignore bodily injury. And even though it adds points and reduces effective range, I've also decided to only use inferno pistols in my assault squads rather than meltaguns, as no self-respecting berzerker would use BOTH hands to shoot at something.

So all that feeds into my new 2k list, which I think would be effective and fun. I'm going to try my damndest to get it done for BOLS... er, Wargamescon:

The Decapitators - 3 Sanguinary Priests, one bike, one jumppack

Mortrek the Slaughterer - Furioso Dreadnought with bloodfists, a heavy flamer, and extra armor

Dante and his buddies are screened by the jump pack assault squad. The bikers, 1 assault squad, and the furioso charge forward in the storm reaver, and the last assault squad can split up between the two rhinos if they want for more scoring skulltaking options.
Posted by bullymike at 6:30 PM

Loving the Rhino you cheesy git.

Why no Blood Talons on the Dread??

Is that the way to go you think? Over bloodfists?

I think anyway I will end up using a frag cannon and heavy flamer on the furioso, until I can get one of those world eater dreads later - I'm doing a bit of a repaint on my old chaos dreadnought for my first furioso, as it would be really nice to actually get some use out of him!