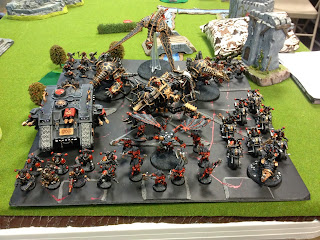 Heyooo, another tournament report! This time I took my Khorne crazies, aka The Guillotine, out to the Wonkos monthly 2k'er. Here was the list:

The game plan is not too sophisticated; just charge right at em and take as many heads as possible! 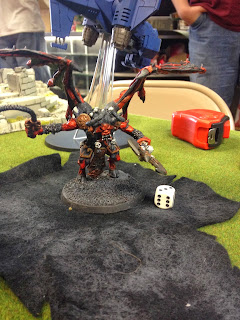 Whoops, forgot a first turn picture for this one. My opponent was rolling with three Sternguard drop pods, a couple tac squads including Pedro Kantor in drop pods, a devastator squad with some missile launchers, and a thunderfire cannon. He brought the three sternguard in right on top of my big swarm and together with the devastators and thunderfre, took out the land raider and the bikers and juggernaut lord. Hellfire rounds are no joke and inflict a lot of saving throws on just about anybody. My counterattack was equally devastating however, and wiped out much of the sternguard in return. Kantor and the fourth drop pod came down and didn't do much before they were wiped out as well. It was a bloody battle all around, with little left on the table at the end, and after the points were calculated, we ended up with a draw, neither of us holding the relic. 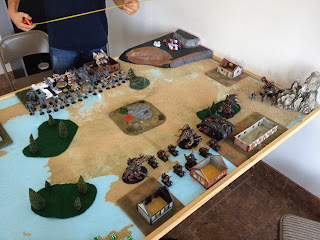 My second opponent John had a fairly mixed Tau force, including a handy commander, ethereal and fire warriors in a devilfish, two broadsides with missiles and missile drones, an ion cannon hammerhead, a big squad of sniper kroot, two large squads of fire warriors on foot, two squads of crisis suits, a full unit of stealth suits, and a ion cannon riptide. I went straight at him, flanking hard on my right to try and take out the riptide as fast as possible. 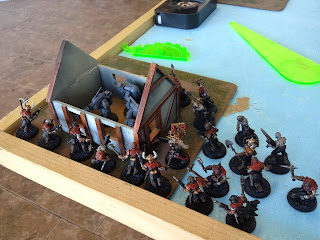 His stealth suits deployed in a small house on my left side, and my cultists came out of reserve to cage them up and fire point-blank into the windows. The suits took out one of the cultist squads before the second one finished them off. I made a big dent in his left side before most of my guys got whittled down. Kharn personally executed the riptide. Late game is was basically up to my soulgrinder and land raider to try and inflict a few more casualties. Another brutal game, it ended very close with John up by just one point. 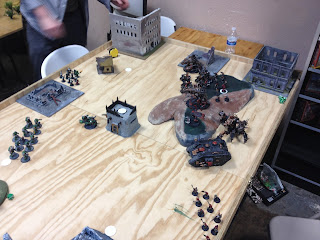 My third opponent had thirty terminators (20 shooty, 10 assault), two 10-man scout squads, a 5-man scout squad in a land speeder storm, and Vulkan leading the whole mess. The land speeder scouts made an early play to try and kill the land raider but failed and were taken out pretty quickly. He kept two of the terminator squads in reserve (deep strike), and my bloodthirster led the charge against the squad on the board, but was shot down and charged. He didn't take many out before getting banished back to the warp. 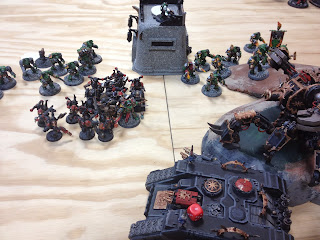 While the juggerlord and the heldrake took out the scouts and Vulkan on his left side corner, Kharn, the chaos marines, and my bikers tried to take on the terminators. My cultists sneakily grabbed objectives to my right and left and fled to the board edges. His other two terminator squads came in and wrecked shop hard on Kharn, the marines, and the bikers, but it was too late: my cultists had taken the objectives and secured me the win.
Posted by bullymike at 10:43 PM