I jumped into one of Wonko's narrative tournaments for the first time earlier this month. It was a 2000-point tournament continuing their campaign for control of a system. This particular week, the gathered generals would be competing for control of Justine, a jungle world where spores in the air gave everything +1 cover. 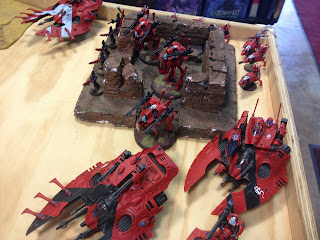 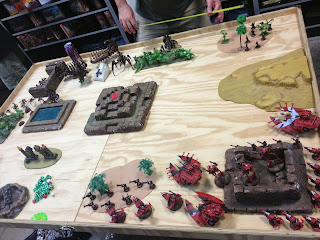 For this game, the relic (a "spore scope") provided a permanent bonus to one of the winner's units (-1 to enemy cover save) for the rest of the tourney. I was playing against a nice guy (sorry I forgot the name) who was running Trazyn the Infinite, 2 units of 10 warriors in ghost arks, 2 units of 5 immortals, 6 wraiths with whip coils, 5 acanthrites, 2 annihilation barges, 1 triarch stalker, and a tesseract ark. The Tesseract Labyrinth lasted a few turns but didn't do too much damage. I infiltrated the rangers in some woods to his left and he spent a good amount of firepower trying to root them out of the trees. In turn, he came at me with the wraiths and acanthrites on my left. I shot the hell out of his stuff, wiping out almost everything and getting 3 table quarters, but didn't end up having time to jump on the relic. So neither of us got the scope! 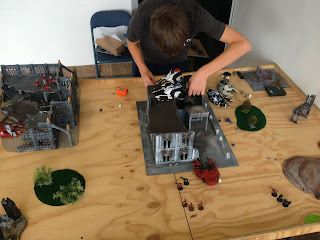 I was paired against Noah for my second game. He had a farseer with mantle of the laughing god, 5 wave serpents kitted out like mine, 2 of them carrying min dire avengers, and 2 of them carrying scythe wraithguard, 2 squads of 5 warp spiders, and three war walkers. I sent my farseer, some bikes, and the dire avengers wave serpent up my left side, the fire dragons and rangers in the middle, and the dark reapers and fire prism on my right.The rangers jumped his farseer in the ruins and beat him down in one turn, and spent the rest of the game trying to distract the war walkers. My fire dragons got popped out of their transport by deep striking warp spiders, while the dark reapers succumbed to the other. My warp spiders mishapped for a turn or two, finally coming on to bust a wave serpent and not much else before they were d-scythed. I fought him off pretty good for most of the game, but he ended up winning 12-9 (or maybe 15-9? I can't recall).

Game 3 - Control the Vault (control the middle building uncontested plus bonus points for units within 12" of the center)
Deployment: Hammer and Anvil 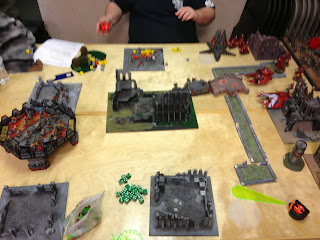 For my last game, I drew up against John Cook and his space wolves + fenrisian guard allies. He had a couple wolf lords with fenrisian wolves charging up the middle at me, two or three squad of grey hunters in rhino following up behind, plus a support crew of rune priest and long fangs, a guard squad on foot, 4 guard lascannon turrets, a psychic battle squad, a squad of guard in a vendetta, a squad of guard in a chimera, and a sky shield. Something like that, I can't quite remember. It was a tough dust-up in the middle as I had to shoot up everything he had coming right at me. I ended up controlling the building and winning a few more points for having units close to the middle.

I won second place for my efforts, and one of the last edition tactical squads. Thanks Wonkos and Frank for running a fun tourney! Gonna try to make it next month too.
Posted by bullymike at 6:45 PM