I played in the Dragon's Lair FOB qualifier yesterday with my Saim Hann Eldar, and ended up withfirst place out of a total of 8 players. I picked up a bunch of old pathfinders and dark reapers from my buddy Hart and got them 75% painted so I could incorporate them into a new 1850 list:

The Reapers can go down to heavy dakka, but until then are a big time menace to society. The pathfinders are less powerful but can put wounds on high-toughness creeps and camp out on objectives in the second or third floors of ruins. I basically traded them for a fire prism and 2 squads of jetbikes, and while I missed the resilience that comes from duplication, I liked the tactical diversity. 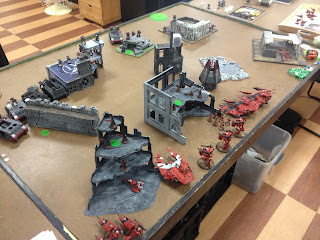 Matt (I think?) had a pretty classic vanilla marines list, with a chapter master, melta/flamer dreadnought in a drop pod, 10 terminators with 2 cyclone missile launchers, three tactical squads with plasma and rocket launchers or a lascannon in rhinos, a missile launcher/heavy bolter land speeder, a vindicator, and a whirlwind. I hadn't played with the new eldar against vanilla marines yet, so that was a thrill. He inflicted some good early damage that put me on my heels, but I also made some crucial cover saves that let enough of my sharp pointy things survive to whittle him down and keep him off objectives. I ended up winning 13-2. 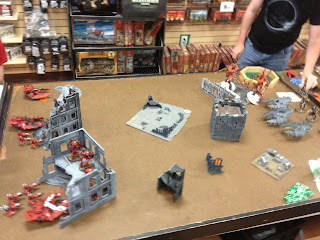 I had a very close second game matched up against Carlisle's eldar. He had an Iyanden list with a wraithknight warlord, a shadowseer, three squads of 5 wraithguard (1 with D-scythes) in scatter laser/holofields wave serpents, 9 or 10 dire avengers, and a second wraithknight, and 3 scatter laser war walkers. First turn was critical, and I rolled to win it. I managed to only drop one of his wave serpents the first turn, but he probably would have done much worse to me. Things went his way for almost the entire game, and I was hanging on by the skin of my warlord trait (master of cities!), when I had an epic 5th turn and killed his warlord wraithknight (all 6 wounds), 2 wave serpents, and 6 or 7 wraithguard that were threatening my deployment zone. A single fire dragon survived being charged by a few last wraithguard and held morale just in time for the game to end on the bottom of the 5th and keep them away from my warp spiders, who were holding the 4-point objective. Tough game and luck definitely helped me survive against a badass army and excellent general. 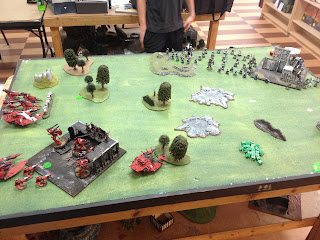 My third game sent me up against Noah's foot eldar list, which consisted of a bike farseer with mantle of the laughing god, an avatar, 10 or so striking scorpions, 10 or so rangers, a big squad of 20 or so guardians with 2 star cannons and a warlock, 2 squads of 10 dire avengers with shimmershield exarchs, 2 double-bright lance and sword wraithlords, and 3 double-bright lance war walkers. He deployed his foot troops right in front of all my dakka, and I wiped them out fairly quickly. He had placed one of his objectives in his opposite corner, and was planning on infiltrating his rangers there - but I won the roll to infiltrate first and put my rangers there instead. The scorpions ended up murdering them, but it kept his troops off the objective. I ended up wiping nearly everything of his besides a few pathfinders and striking scorpions by the fourth or so turn, and we called it.

I haven't decided whether I want to spend the scratch on going to Denver to play in the invitational. I'm sure it will be pretty hard core and that's a lot of money to spend on a long weekend of having to deal with spam style douchebag armies and their handlers.

Here's the new guys after a few more finishing touches: 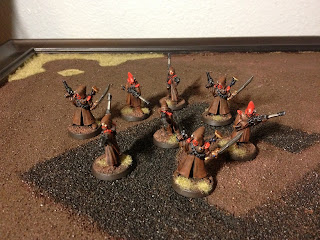 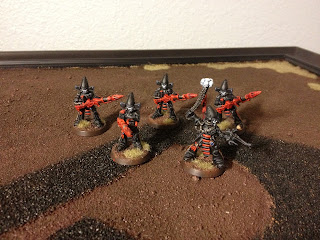 Posted by bullymike at 8:44 PM