Return of the Necrones de Guerra 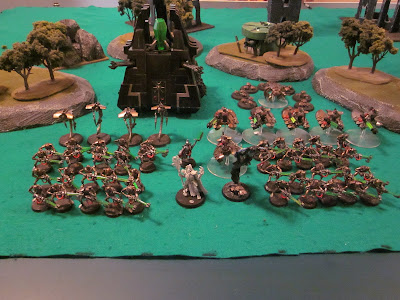 A while back I bought my buddy Mack's Necron army. They've lain dormant waiting for the new codex and I'm excited to get them back on the battlefield. I took them out for a trial run the other day against Robert's Tzeentch demon army and ended up squeaking out a win, but more importantly, got to really experience how different they feel from other armies, including the Necrons of the previous codex. I had just enough models to put together a classic 2k list, with a modern general:

Robert was running a Lord of Change, 2 Tzeentch heralds on chariots, 3 squads of flamers, 4 squads of horrors including the Changeling, and 2 Tzeentch demon princes. We were playing for 4 objectives with Dawn of War Deployment and I went first. Things looked bleak when the Stormlord's gimmick stopped on the second turn before he had even dropped anything in, and then when he did, he wiped out Imotekh, the cryptek, and the attached warrior squad right away. I had nothing left to do except buckle down and go after the horrors and be prepared to fight for a draw. The destroyers, c'tan, and wraiths were able to take care of that fairly quickly. The warriors went down pretty easily, with the reanimation not having much of a positive effect. Because he didn't have much in the way of heavy strength guns, the monolith survived for quite a while but didn't do all that much damage. I did manage to suck up a few flamers with the door, which was probably the high point of the game. The scarab swarms didn't have any vehicles to eat, but they surprised a unit of flamers that would have otherwise wiped out my last troops unit. One of his chariots was mishapped to a far corner of the board late in the game, while the other one and the Lord of Change raced to push me off my last objective. The surviving wraiths and scarabs and the tomb spyder successfully held them at bay and I won 1-0.

After further consideration, I want to try playing with Nemesor Zandrekh for a while. At 185 points, he is a steal. He has great equipment choices, and for only 5 points above a similarly equipped lord, you're getting his master strategist buff/nerf powers (along with the dubious phased reinforcement ability). I think the nerf part of that ability is the more useful one, though stealth and tank hunters for my own guys will be nice, too. I want to try pairing him with a troop squad and a cryptek with a chronometron and try to keep him and his buds alive for a while. I picked up an annihilation barge that I'm pretty stoked on using. I had to repose and rebase all the models and fix a few broken ones, and since I'm already missing a few arms and legs here and there, I thought I'd go for a complete broke-down, emerging-from-the-swamp look. I'm going to take advantage of their already rusty-looking paint job, somehow incorporate water effects into the bases, and judiciously apply some hanging seaweed-looking goop from their limbs. I eventually want to paint the neon gun tubes, too, since none of the newer models use them and I always thought they looked a little off when light is generally painted on any other 40k miniature, rather than using some kind of effect that depends on the actual physical properties of the miniature.

Lately I'm generally over the competitive approach to 40k. I still prefer 1500-2000 point games with standard missions, but since I barely have enough time as it is to build, paint, and play for fun, I'm not inclined to spend that precious time messing with any kind of spam. If a unit is halfway decent, has a neat effect, and/or just looks cool, I'll include one in my collection; otherwise, I probably won't be motivated enough to paint it.
Posted by bullymike at 9:40 PM