The Awakening of the NDG

I haven't been able to muster the guster for a 40kology post in a long time, but I probably don't have that many readers anyway (not a pity party!). First thing, I HAVE been playing quite a bit, and only with the reawakened Necrones de Guerra. I made a video battle report a week or so ago that was going to be the start of something great, but but windows movie maker sucks a bag of assholes and I don't have the coin for an Apple, so for now that idea is sitting the bench. Also, my camera doesn't take high res video anyway, so nothing lost, etc.

So, the Necrons. This is my new favorite army, for sure. And my Berzerker Blood Angels were the culmination of a 15-year love affair with khorny skulltaking, so that's saying something. Maybe it's the rules, maybe it's the models, maybe it's the fact that only a few people locally are playing Necrons and I started out with a full army on day 1. I've had a fairly even mix of wins and losses but always enjoyed myself. I will note that against strongly competitive army lists, I haven't done so well. But screw those types anyway, who cares. So boring. Here's my favorite units to play:

* The Stormlord - If you've played only one game against the Stormlord, you might think he's either total cheese or a waste of points. If you've played two, you might be more lukewarm about him. In any case, I think he is a great idea for a Necron special character. The nightfighting and lightning can really change up your normal game, are great fluff-wise, and both come in handy against those little-shooting-box armies. And now that they faq'd the chronometron (though I still don't get what "phase" the beginning of the turn is), you're much more likely to keep it going for at least the first two to three turns. And destroying someone's most beloved vehicles before they have a chance to do anything is cracktastic. You know it's bad for you, but what a rush. And it's often more entertaining than devastating for the enemy. The last game I played, lightning wiped out both of Robert's small ratling squads in a single turn. Not a real gamechanger but totally hilarious: the shortest guys on the table!

* Wraiths - These guys are my linebackers. Whatever comes at you, they're likely to either wipe them out or tarpit them until you can move up some more gauss. Since I bumped my original squad of four up to six wraiths, I've only been loving them more. I just run em with 4 or 5 lash whips in there. Well worth the points. Sometimes I'll run a destroyer lord with them, burying him real good in a dense layer of wraithfat, and either charge them all in together or break him out of the squad at the last minute to go carve open some nearby tanks or stragglers. You have to watch out for whole gangs of powerfists, but you can usually see guys like that coming a ways off.

* Annihilation Barge - I magnetized my single barge, so for a while I was running Anrakyr the Traveler in a command barge. I had a lot of fun skimming around firing other people's vehicles at themselves, scything up their other vehicles, or just using that flat-out cover save to be a general pain in the ass to finish off. But after the FAQ took all the fun out of ole Ann-Racky, I switched to the slower, shootier barge species. Short range, but by the time nightfighting has run out, there's plenty of enemy stuff within 24 inches anyway.

* C'tan - Another fun unit that can make for a totally different game with the inevitable writhing worldscape ability. I was running mine with spirit dust for a while, but recently I switched to pyreshards, which I think are better and more S4 dice rolling fun! Stealth and grenades were just not adding that much to the C'tan experience. He usually underperforms in assault, so he usually camps out behind a nearby monolith or pick your targets carefully.

* Scarabs - Ok, ok, scarabs are cool too. I start with six and usually wait until I have Spyder'd them up to ten or twelve to let them off of the scarab leash. Those are really small leashes! Usually I'm totally fine with sacrificing a 90 point unit to take out a charging land raider, and I'm even more fine if they can stick around a little bit longer to annoy something else. 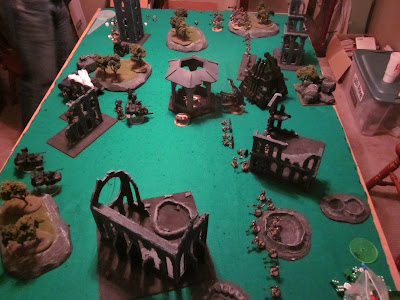 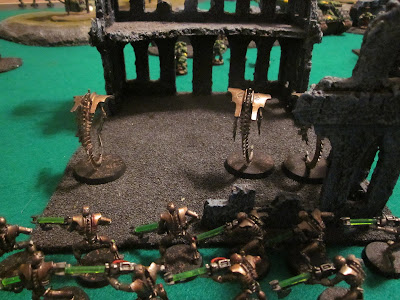 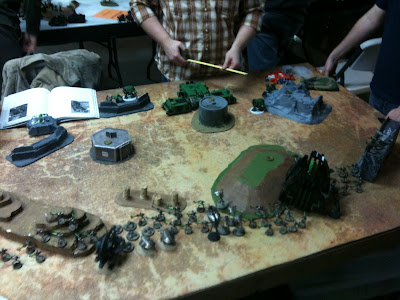 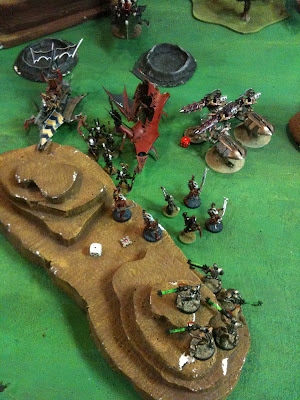 And another game against Kings' Mant-assers: 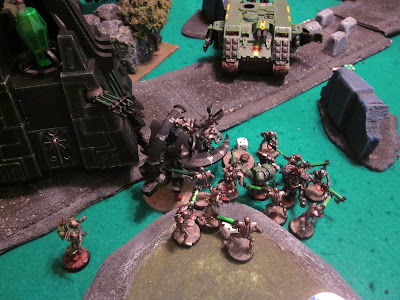 Here's a bonus battle report against Kings' guard
Posted by bullymike at 8:14 PM

The new Cron rules definitely get them some flavor they were missing before.