I crammed a bunch of painting and basing on the NDGs in on Thursday and Friday so I could get them all done before a 1250-point tournament up at Dragon's Lair last Sunday. I took the following list:

I took the Stormlord because he's always been fun for me and usually changes up the game quite a bit. I also guessed the nightfighting might foil other 1250 point armies. Wraiths are my favorite Necron unit so I decided to max out on them. 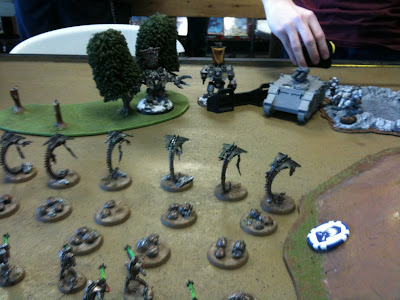 Deployment - Pitched battle
Primary Mission - 4 objectives, 2 along the center line, 1 placed by each player
Secondary Mission - Have the most units within 6" of the enemy table edge
Tertiary Mission - Control the most table quarters as determined by killpoints

My first match was against Brandon, he of the incredibly articulated and beautifully painted Bjorn model. He was playing with a rune priest, iron priest, and servitors inside a standard land raider, 3 grey hunter squads with plasma guns in twin-linked LC razorbacks, one dreadnought with a multimelta, and one dreadnought with plasma cannon. He decided to hold everything but the land raider and one razorback in reserve. With nightfighting going strong, two of the objectives along the center line of the table, and most of his stuff arriving late, I decided to charge headlong into the breach with the wraiths, scarab swarms, and one of the warrior squads. I got across the board fairly quickly with the scarabs and wraiths, the scarabs eating both dreadnoughts and the wraiths taking down a razorback squad or two on the way. I never had any lightning strikes, but Brandon was having bad dice luck and I ended up getting all three missions in the end. 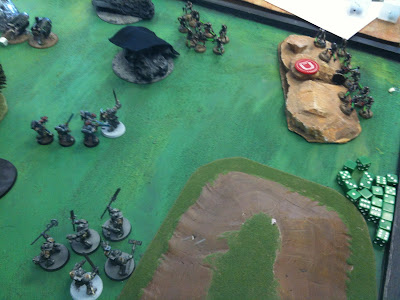 Aaron was playing with Draigo, 10 paladins, 6 purifiers, and a storm raven. Unfortunately I left all my AP1 and AP2 at home with my catachans. I'd have to make do with a solid castle and hopefully a nice counterattack from my wraiths. I ended up taking out his storm raven with the scarabs, but a small space was left for Draigo and the purifiers to disembark and they got out and made mincemeat out of most of my forces. A few warriors and the tomb spyders managed to hightail it to some distant terrain pieces while the wraiths and swarms sacrificed themselves to keep the grey knights busy. I had held the stormlord in reserve with the cryptek, warriors, and ghost ark, and they came in just in time on the left side of my long edge to grab the moving objective just as it came within reach. On his last turn, he made it to my home C&C objective to contest. He won the primary but I came away with the secondary and tertiary. 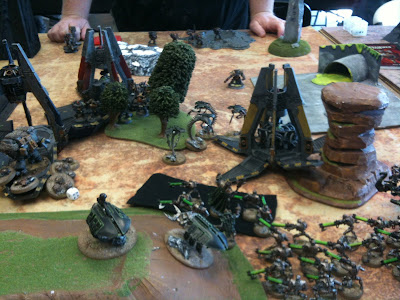 Deployment - Dawn of War
Primary Mission - Killpoints
Secondary Mission - One objective each in opposite quarters
Tertiary Mission - Have the most units within 12" of the table center, not including dedicated transports

So, Space Wolves and Grey Knights all day long. Oh well, at least Jon C had a different style wolves army, with one drop pod full of grey hunters, one drop pod full of terminators, and one drop pod full of multimelta dreadnought, all dropping into my necrocastle within the first two turns. He also had a rune priest with lightning and jaws, two more squads of grey hunters in rhinos, and rocket launcher long fangs. Nightfighting kept the long fangs and rune priest from being very effective for most of the game. In the final turns, I had just fought my way clear of the drop pod salvo (wraiths, scarabs, spyders, and mass gauss fire in combination makes for a decent castle) when his rune priest rolled up and world wolfed both spyders, three scarab bases, and two or three warriors just like that. Wish I'd paid for that gloom prism after all! In any case, I was extremely pleased to finally be able to inflict a kill with Imotekh's staff of the destroyer (zapped a wolf termie!), and everyone else performed admirably as well. We drew the secondary mission but I won the primary and tertiary missions.

After the dust settled, I won first place! Hurray, prize support! Alas no, apparently that's not a thing anymore. I did get a medal, but I bit it and it is made of not gold. All in all I was most happy to have three challenging games against friendly opponents. Seldom was heard a discouraging word and the skies were not cloudy all day.
Posted by bullymike at 10:52 PM

Any tournament where you hold off the two top tier armies in the game is a good one. Congratulations.