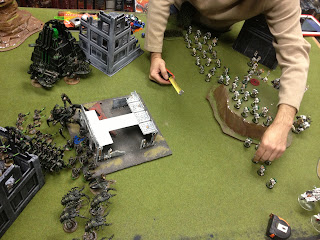 A few pictures from the last few weeks of 40k for me. Even if I can't seem to find the time or desire to write a full post on a single subject, I feel compelled to at least briefly keep tabs on what I've been doing. The above game was my necrons, including a then-newly-painted Triarch Stalker, against Bigred Larry's pre-Heresy Deathguard. If I remember right, Larry came away the victor by one point. Bigred turned it into a battle report for BOLS that made it to the site not too long ago. This was a really fun game, as I brought some new and old things and was playing with a pretty mixed demo-type army (always my favorite). The Pre-Heresy Deathguard had some interesting little tricks, though I was able to keep his super double plasma pistol guy from making his money back. 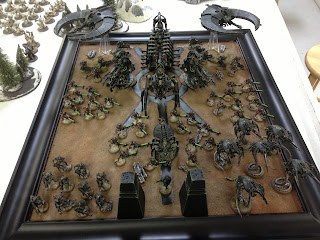 On the second weekend in January I drove up to Killeen for a one day, 3-game tournament at Battlefield Games. Big store, plenty of merchandise, nice staff and players. I was playing with a resorb foot lord in a big blob of warriors, two more 10-man warrior squads, a triarch stalker, a 10-man tesla immortal squad, 2 5-man immortal squads with stormteks in Night Scythes, 6 wraiths with 3 whip coils, 1 gloom prism spyder, and 2 annihilation barges. I came up against another Necron player in the first game playing 2 destroyer lords, 3 squads of 20 warriors, 2 or 3 squads of 5 immortals, 6 separate tomb spyders, and 3 scarab swarms. I made a big error in letting the scarabs make a first turn charge into my big warrior unit and accidentally sacrificed the lord, which basically meant the rest of my army was tied up in fending off scarabs and spyders for the remainder of the game. I think if we'd had time for a 7th turn, I might have snuck away with earned more points, but as it was, my very friendly but very boring army-having opponent won pretty big. At least his silver tide was fully painted! 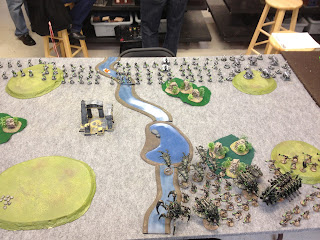 The second mission was pretty whacked (no units could cross the space between vanguard strike deployment zones for at least 3 turns, and I drew double manticore guard as my opponent!) but I managed to pull out a win nonetheless. The main mission was based on getting the most points in models into the center. In just 2 turns, I was able to pile in and fight off his guard in order to pull out a massacre. Still, having the crap blasted out of you for 4 turns while you basically just fidget, not cool! For the third game I played a killpoints match against the new Dark Angels and completely wiped out my opponent's  mixed ravenwing/deathwing army after he basically came at me piecemeal as I was castled up. I fought off a big squad of ravenwing with my wraiths, shot up the small second unit with my firing line, and picked off a couple deathwing squads with the stalker and immortals. Late in the game, the stalker let me pour fire into his belial megaunit until the squad's apothecary just couldn't keep up with the damage I was dealing and he gave up the game. I ended up winning best appearance, and I think second overall (glad I brought the display board!). I will definitely head up there again for another 40k tourney later this year. 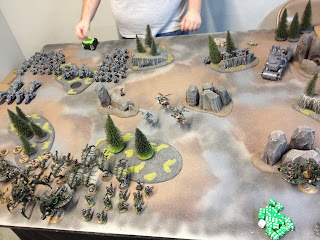 I was in Lubbock for a few days work and so I set up a game with a regular (Mitchell) at Stormcrow Games. This was a big store with plenty of space and tables. The folks were very friendly here too. I was playing another pretty mixed army with no flyers (couldn't fit em in my carry-on), a douchecanoe, a squad of spyders and scarabs, a stalker, an annihilation barge, and a bunch of infantry. For what I would consider balanced games, the stalker is so, so money and really should be taken out immediately. He enables you to lay down some serious rain when you need it most. He got bad reserve rolls for his dakkajet to come in, and he only managed to chew through my skirmish units before I mowed down almost his entire force. I held my flank with my canoelord, who, after getting his ride shot out from under him, stopped an entire battlewagon along with the choppa boys and weirdboy inside to prevent them from scoring an objective. A nice win, hopefully I will be welcome back in the future (if only for revenges sake)! 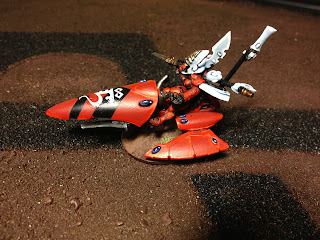 While I was at Stormcrow, I picked up a lonely metal farseer on their rack. This was the version with the singing spear making the devil horns - I already had the one with the staff and shuriken pistol, and I've been wanting to play with a legit second farseer lately, so I had to get him. Only now him is a her, since I adapted the head and sword arm to a female Shining Spear body and added a few more accoutremonts to finish the ladyseer out. I have an 1850 build I want to try with the two farseers and a 4-warlock seer council, 10 dire avengers in a scatter laser/shuriken cannon wave serpent, 4 squads of 3 jetbikes, a vyper squadron with scatter lasers and shuriken cannons, 2 fire prisms, and a falcon with 6 fire dragons including a pike exarch (super bonus melta killzone lol). Not a super competitive build but zappy and fast enough to take a bite while I use invisibility and fortune to keep my own damage dealers alive. 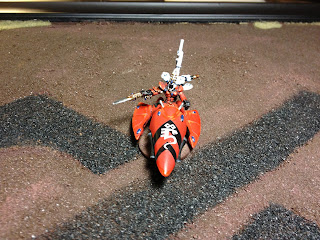 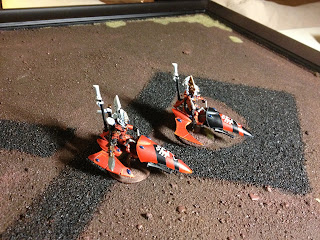 Those Necrons are lookin' good!

Your Necrons look fantastic!
You should really post some photos of individual models.
Very inspiring stuff! :)