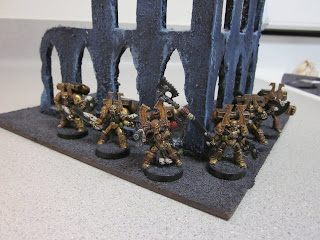 I reallllly want to have a pure post-heresy World Eaters warband army using the blood angels codex... I just can't figure out if it would be worth the investment (and whether I need any more damn armies). It would avoid any psykers and pre-heresy weapons like assault cannons and such, and just focus on quick resilient assault - just straight up coming to take your fucking skull. Sanguinary priests would be represented by khorne icon bearers. Really, the main impetus is to do something fun with my old school berzerker jetpack guys. They just remind me so much of an 'evil' sanguinary guard. And it would give me an excuse to get one of those dope world eater dreads. But is it enough to warrant spending a bunch more on getting the rest of this force? I did notice today that it is somewhat similar to a Lamenters list the Dude has posted on his blog, though a bit lighter on troops. And I will just mention that his Lamenters just get more and more badass as time goes on.

Everyone would just stick together and go chop heads or die trying. Everyone would (usually) have furious charge, feel no pain, extra attacks from being near the Exsanguinator, and sometimes even fearless - plus one random sergeant would be blessed by the Blood God every game - seems pretty Khorney to me! It would really count on feel no pain and speed to get to grips - any kind of leafblower list could shoot it down pretty easy. Very low on troops, but a warp-riven band of skull-taking madmen probably probably would be. I could either combat squad into the Rhinos or just go full on into the stormravens. Not so competitive - the only goal would be to take the biggest skulls on the board before the game ended.

Where'd they get the stormravens, you might ask? Maybe the question should be, where'd the imperials get theirs?

If you bring those old-school 'zerkers to the gaming table maybe (or maybe not) I'll forgive you for jumping on the BA bandwagon with TWO (!?) Stormravens.