Some pics of my Crisis Suits - now with extra dynamism (that's a thing): 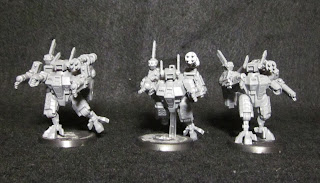 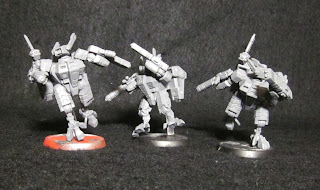 Got in my first game with the new Tau tonight against a Chaos Space Marines list. We played 1850 Big Guns Never Tire with 4 objectives and Vanguard Strike Deployment. He had a nurgle bike lord with some nurgle bikes, 2 x 35 and 2 x 12 man squads of cultists, 1 small squad of plague marines with plasma guns, a tentacle-love maulerfiend, 2 heldrakes (1 baleflamer, 1 hades), and 2 lascannon predators. I had an ethereal, shadowsun with command drone, 3 crisis suits with TL flamers and burst cannons, 4 stealth suits with a homing beacon shas'vre, 3 crisis suits with fusion guns and plasma rifles, 2 x 6 pathfinders, 2 x 6 fire warriors with devilfish, 2 x 12 fire warriors on foot, 18 kroot with sniper rounds, 2 hammerheads, and a sky ray.

It was a fun game, bloody on both sides. I had a great start, and was looking to do some real damage with shadowsun on his left flank deep striking off infiltrated stealth suits, but they were not able to drop a maulerfiend, and then I stupidly left them bunched and ready for his heldrake coming on the table. Some failed look-out-sirs, then some failed leadership tests = adios both units. I was only able to cripple the big birds (really felt the absence of my broadsides). My kroot, fire warriors, and 5 squads of free-roaming gun drones were able to inflict enough damage to his midfield objective holders that I kept him from grabbing an objective in the center. Meanwhile my flamer crisis squad deep struck perfectly next to a small cultist squad holding his backfield objective and wiped them out handily (only 12, but they could have killed at least 18 - I like that unit so far). Meanwhile I captured my home objectives with a sky ray and hammerhead. He got first blood and slay the warlord, and had killed 1 of my hammerheads, but I had 2 objectives along with the maulerfiend kill, and so earned the win. It was tough gong for a while tho.

What did I learn?

* I had a blast markerlighting stuff and making the fire warriors completely wreck face on his infantry. I could have done more with them but all my markers were obsessed with heldrake defense after Turn 2. I was looking forward to doing some stick and move with sky shadow, but he wisely shut that down with the flamey bird while the other one flew about vector striking my vehicles.

* Pathfinders plus fire warriors plus the ethereal's power to grant an extra shot at half range = big time. And 2 squads of 6 PF seemed about right for markerlights, and obviously the sky ray using skyfire for his networked lights was nice too.

* The sky ray was ok. My seekers didn't do much for me in this game, but the 2 sky fire markerlights at least gave me a chance to fend off one of the heldrakes.

* Why did I take bonding knife ritual for crisis suit teams - with a 3 man team, you would never be below 25% squad size, so who cares about heroic morale, and with shadowsun joined up, she'd ideally die last and have heroic morale anyway. So there's 6 points I could have spent somewhere else.

* The build I'm going for eventually (once GW gets their shit together and ships their gd awesome product) will include broadsides instead of the stealth suits and the second hammerhead - but I will miss those units in my 1850 list. Two hammerheads was way more forgiving than one (although mine could still not bring down 1 stupid maulerfiend). The stealth suits provided a little dakka, the homing beacon was clutch, and I love the models, but I think I would only bring them out for 2000 points or more.

* Are distortion pods worth it? Oh you betcha.

* Still learning how to castle well against heldrakes, damn their scaly hides. I had to stretch out a bit to inflict good damage to his midfield, so it was easy for them to bounce around hectoring and vectoring. I definitely could have used more skyfire to at least give me a chance to kill ONE of the gd things. At least they didn't both have a baleflamer.

* Fire warriors and pathfinders need area terrain early in the game. Otherwise, even with their superior anti-personnel dakka range, they will get picked apart.

* I may have to add interceptor to my broadsides... so expensive though! (Arrggh I want my models!)

Earn free bitcoins over at Easy Bitcoin. 11 to 33 satoshis every 10 minutes.