Having hastily finished my two landspeeders over a few evenings last week, I was eager to see if my new Space Wolves list was any kind of improvement over the last. For the points of the vindicator and swapping out the attack bikes' multimeltas for heavy bolters, I added the two skimmers and made the Wolf Guard terminator assault cannons master-crafted. I knew it would be tough going in, being on the bad side of the numbers game, but I've heard that sometimes you have to tame the beast before you let it out of its cage. That in mind, I boxed up the Brothers of the Blood Sea: Extreme Puppy Rescue edition, and with a couple of wolves as my objective markers, headed up to Ninja Pirates... and got a fucking speeding ticket on the way there! Blast the joyless Arbites and their accursed speed traps. That wouldn't have happened if I had been in a cult limo. 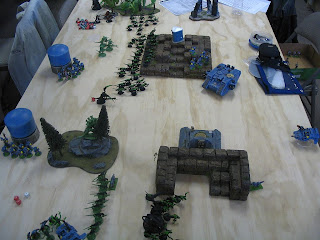 This was the first of three games against opponents I'd seen at Ninja Pirates tourneys for months but never actually played before. Cricket had over 100 models in his bug army, with an amped up flying CC hive tyrant (scything talons, toxic miasma, implant attack, toxin sacs, warp field, god knows what else), three squads of three warriors with twin-linked deathspitters, two squads of 12 genestealers with flesh hooks and maybe talons, a big squad of fleshborer gaunts, a big squad of spine fist gaunts, two 10-man squads of hormagaunts, a sniperfex and two dakkafexes with five wounds each. We both rolled Rescue for our mission. Unfortunately (idiotically), I had placed one of my objectives fairly close to his deployment zone and he was able to claim it with gaunts in the second turn. The land raider pulled forward and unloaded the blood claws and HQ into the center temple, hoping to make a stand with them and maybe rescue his objective marker located on the other side. Gaunts and warriors lit them up and over half of the blood claws died in one turn, leaving the survivors to fight off the subsequent gaunt and hormagaunt assault on their own. The Land Raider itself was immobilized early by a venom cannon shot, and then destroyed in the subsequent turn. The land speeders split up after one of them was shaken by a Hive Tyrant assault, the functioning one heading across the board to burn up some genestealers, only succeeding in killing three or four. The scouts arrived and charged into the remaining stealers, taking them down to three, then two, then one, before finally finishing off the last just by dogpiling him. Even in their great numbers, the gaunts were a breeze once I could get them out of synapse, but they proved a frustrating tarpit capable of slowing and diluting one of my baddest units for a fucklong time. I also underestimated the power of those goddamned deathspitters; he had what semeed like a continuous supply of the twin-linked S6 blast templates, and they were all over me as soon as the drop pod doors opened. Try as I might I only killed one of the three squads of those bitches. Along with some seriously poor armor save rolls they brought my numbers down the most, followed by the dakkafexes and the hive tyrant. I made two major mistakes: I basically gave away one of my grey hunter squads by isolating them in the middle when I should have consolidated my attack on the right, and later I forgot to move my attack bikes around the third or fourth turn and the hive tyrant's implant attack wiped them out before they could even blink. The big bug spent the entire game flying back and forth between his deployment and my own, swatting at land speeders and assaulting foot units with thorough impunity. The land speeders were eventually destroyed, but they lasted quite a while and overall I was very impressed with their debut performance. The Rune Priest had a good game as well, whittling down around 10 or 15 gaunts by himself over three turns after all his fellows had been killed. I finally managed to rescue one of his objectives with the Terminators after they blew away the heavy fex guarding it, but couldn't hold one of my own to accomplish my second mission. Tyranids win, 2-1. 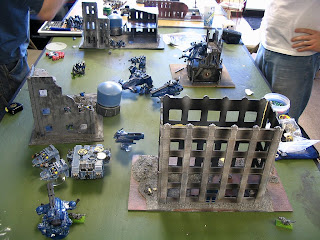 Jason's got a unique-looking Tau army, with a lot of cool conversions, like the adapted predator turrets on the hammerheads, and the skull defiler heads on certain battlesuit units. He had three hammerheads, along with two squads of 6 fire warriors, a fusion gun piranha, two squads of battlesuits with rocket pods and plasma, two HQ battlesuits with a bodyguard each, also with rocket pods and plasma, 6 stealth suits with a fusion gun on the leader, and one devilfish transport. We rolled the big triangle deployment zones, and bridgehead for both our missions (capture one friendly and one enemy objective). I rolled to go first, and the bikes inflicted a couple of early casualties on the stealth suits before being utterly erased by plasma and rocket fire. I tried to flank heavy on my left with most of my units, except for one grey hunter pod which I sent to my right to attack his fire warriors and possibly capture one of his objectives in a big ruined building in his corner. Probably the low point of the game was losing the other grey hunter drop pod off of the board edge while trying to solidify my hold on the other ruined building where his second objective was located. Instead, the blood claws and terminators were left to hold it themselves, with the land speeders and scouts launching attacks in the immediate vicinity. The terminators managed to bring down a squad or two with their shooting, and the scouts toppled one battlesuit squad as well but got tied up for several turns in combat with the more senior tau HQ. Heavy fire from all the skimmers and battlesuits took a toll and eventually the land raider, one landspeeder, the blood claws and terminators were all destroyed. After wiping out two fire warrior squads in assault, the half-strength grey hunters hiding deep in his deployment zone couldn't get close enough to the objective they were trying to eventually capture. This was basically the same story as the first game with a slightly different flavor: shooty death for the Space Wolves, Tau wins, 2-0. 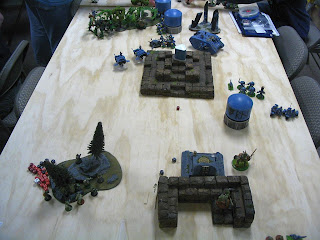 Thor had a near pure Nurgle army, with a demon prince, Typhus, a greater demon, a squad of five or six nurgle terminators, two squads of 10 lesser demons, two big squads of plague marines, and two defilers. I rolled to get the rescue mission again, and he got firebase (probably the easiest mission - control any two objectives). He split his two plague marine squads, with one on each side hiding in cover, with the defilers in position on his left near his rear-most objective. He went first but luckily his ordnance ricocheted harmlessly off of my exposed land raider. I exploded one defiler and immobilized the other in the first turn with my land speeders, while the raider drove far forward and discharged the blood claws to "rescue" one of his objective markers. The scouts and both grey hunter packs emerged from reserve and attacked the plaguebearers hiding in the forest on his left side. The scouts were easily repelled, but T5 and feel no pain couldn't stand up to the combined power fist attacks of the grey hunters. The greater demon arrived and tried to fight off the hunters but was slayed by the rune priest and wolf guard battle leader. Eventually he made it across the table with the demon prince, Typhus, and a pack of demons to loiter on one of my objectives, but my land speeders, attack bikes, terminators, and land raider counterattacked and took care of them, securing me a win in objectives (2-0) as well as victory points.

The limitations of the Space Wolves list were quite evident in my first two games. I think it can hold up against other more compact MEQ armies, but it's much more difficult to use against mob or mechanized skimmer forces. I did make a few mistakes that hopefully I'll learn from in the future. I definitely preferred the 2 land speeders to the vindicator, and I think I'll stick with the melta/flamer armament rather than make them tornados. My main concern has to do with the land raider. It's so freakin expensive and fairly vulnerable considering all the high strength guns out there. I've considered a few other options, such as swapping in a predator annihilator or bringing the venerable dreadnought back in, but as the land raider grants both tough transport as well as decent anti-tank, I'm going to play a few more games with it and just try to improve my tactics.
Posted by bullymike at 11:58 PM

The more I read about your Space Wolves to more I want to play against them!

I think it would be a really bloody game against my Death Guard since both army's goal is to get in combat with as many powerful characters ASAP.

Have you concidered swaping the Land Raider and Blood Claws for another 2 Drop Pods of Grey Hunters? Or possibly 2 Preds? I suppose you are limited to what models you have. Do you have BC Bikes?

No, no bikes. Check out the big write-up in my next post. Maybe on down the line. I'm hoping that the new codex would include a better way to add Wulfen; that would be totally bad-ass if I could have a reason to use those awesome models and I might consider abandoning the Blood Claws if such an opportunity arose. One thing, though - Wolves need 3 HQs at 2000 and the ICs really need an accompanying squad to survive very long. I usually write the Claws off and count on the Battle Leader and Rune Priest to kick the major ass, but if a couple Claws are still alive swinging powerfists, then all the better.

And about the drop pods, building and painting those was really simple but I haven't worked up the desire to bust out any more of them. At the very least I'll probably make at least one more, if only to make a 100% deep-strike army: a venerable dread, two other HQs both with terminator retinues, the grey hunters, the blood claws, the land speeders, and the scouts (not technically deep strike but close enough). That sounds fun, right?

Your army sounds like a lot of fun. You use things like DP, Land Raider and Termis that most people over look durring Turni lists.

I hope it works out for you until the new list comes out... this year or next. Not that wolves are a bad army but they have gotten a little stale over the years...

Have you ever thought about playing 13th company? Bikes are a lot better and those long fangs+rune priest... yeikes!

@BullyMike
Since there are not even rumors of Space Wolves at this time, any thoughts or opinions on how SW can(will) be brought into line with the new DA/BA style of Marine lists? while at the same time retaining as much of the SW flavor that the old list has?

@Anon
The downside to 13th Co. (besides the lack of legal support) is that their models are even more expensive leaving you with an even smaller army. Secondly, you lose all transports including pods.