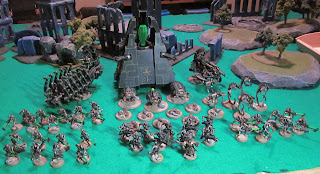 I played in an 1850 today with a new necron list I've been working on over the past couple of weeks. I decided to drop the Stormlord, not because I don't think he's the bees knees, but because I wanted to experiment with lists using normal Overlords and solar pulses. I learned a bit more about playing these guys today, and a bit more about some other armies as well. Without further ado, here was my list:

Sorry for the lack of game pictures (I glitched on that), but here's some sum-ups:

For the first round, I played against Matt's Grey Knights. I fought against this same list 2nd round last tournament and got smacked around quite a bit. Through a few different kinds of happenstance, I did a little better this time, coming out 20 to 10. He was having some big problems with the animal hair in the store though and felt his allergies were to blame for some tactical errors he made. OK, I'll give him the benefit of the doubt. I beat Grey Knights because of allergies. The Monolith mishapped and he placed it behind his lines so he could kill it with his psyfleman, but then he also had to pull back his dreadknight to deal with it. Long story short, it wasn't enough to drop the Lith and the next turn, my lords and immortals came jaunting through. The lords mindshackled and scythed his ass down. Revenge for the last game, complete. We drew on two of the objectives and I won one of them (destroy a 'marked for death' unit - a strike squad cut down in the prime of their life by the Overlord Brothers).

Second round I faced J.R.'s Sisters of Battle. Even though I have my own Sisters army, I never picked up the new rules and was a little unprepared for the Celestine factor. Resurrection orb reanimation protocols with a phylactery, plus a power weapon beast in close combat? The thrice damned harpy just wouldn't die. I killed her at least 5 times, but she got right back up and wiped three different troop squads by herself. I'm positive only the game ending on the 6th turn kept her down for good. We ended up going full draw accomplishing one objective each and drawing on the third.

I was paired up against Sam's Chaos army for the third round. He had a lash sorceror mixed into some thousand sons, Kharn hanging with a chaos marine squad in a rhino, another couple plasma and/or melta chaos marine squads in rhinos, a couple melta havoc squads in rhinos, 2 7-man raptor squads with double melta and powerfist sergeants, and a possessed vindicator. I took out the raptors early, and thanks a good castle on my left and a nice push forward from the monolith, immortals, and ghost ark warriors on my right, the only thing that gave me any trouble really was the thousand sons, and eventually they were the only thing he had left, and I kept them busy with a tomb spyder for a couple turns until it was all over. Full points. I only regret I did not have the opportunity to give Kharne the full DOUBLE MINDSHACKLE treatment, but my wraiths did the job well enough.

* Mindshackles are awesome. I mean, besides the whole concept of filling some chump Justicar's noggin with tiny mechanical beetles and getting him to thump his buddies with a thunder hammer (and/or himself in the head - nom nom nom OH GOD MAKE IT STOP!), it really lets the Overlords take on all kinds of weird crap, especially lonesome monstrous creatures or small hardy units that might otherwise be trouble. I mean, 15 points to deny an opponent's most dangerous attacks (with proper positioning) is good enough, but then you get his attacks in your favor? Priceless.

* The only thing better than Mindshackles? DOUBLE Mindshackles. I couldn't stop saying this with Macho Man Randy's voice today. I'm sure everyone else around me loved it as much as I did. Seriously though, it might not be worth it - I might try putting my second Overlord on a Command Barge next time instead.

* When Mindshackles aren't awesome, it does indeed hurt not to have an invulnerable save. After the third or fourth time I killed Celestine and she got back up to wipe out another troops unit, I charged her again with my two Overlords... and both mindshackles failed to do anything. Celestine handily dispatched my resurrection orb lord, who rolled a 3 and left his pardner to wipe her out by his lonesome (which he eventually did, but if the game hadn't ended, she probably would have just gotten back up and cleaned his clock too). Still, I'd have a real hard time paying 45 points for that 3+ invulnerable. Just gotta watch out who I let them tangle with or be ready with a Plan B if things go tits up!

* Gloom Prism - I had my doubts before, but I don't think I had really learned how to best deploy these guys before. Castled up, you can work the scarab farm while protecting nearby key units from nasty things like lash or battle psykers. 15 points plus some more wound allocation? Sure why not. If the 6th edition rumors about wound allocation and random psychic powers are true, they might not be worth it anymore. But from what I've heard about the vehicle hit points, I really won't miss it.

* I do like the Monolith, but I'm not convinced a veil or Obyron wouldn't be better. Still, it does give you a deep-striking webway, and the battle cannon also came in handy several times today, whittling down bunched up SMEs in and out of cover before my gauss finished them off. And the damn thing is so emblematic. How can I leave it at home? I mean, if a second ghost ark and annihilation barge fell out of the sky onto my hobby table, I could probably find it in my heart to give them a chance instead...

* If I don't switch it out altogether for a Command barge lord instead, I'm going to try switching out the mini-tesla on the Annihilation Barge for a gauss cannon. The AP3 would have been real handy on several occasions today. One dakka barge is still not that great though.

* Double pulses doesn't come in handy all the time, especially with the silly searchlight rules (I can't fire a gun in broad daylight while driving fast, but I can pick a target out of the darkness with a beam of light? Crocodile Dundee eat your heart out), but I have a hard time not leaving myself the option for a second (or third in DoW) turn of nightfighting shenanigans. I also had the opportunity to take away the effects of nightfighting during my own first turn in DoW,which allowed me to wreck a couple of key rhinos.

* I was not all that impressed with the tesla immortals. I'm not entirely certain it would have made a difference in today's games, given all the 3+ saves I was up against, but I may end up going gauss/phaeron sometime in the future.

In light of those notes, my list probably needs some more tweaking. More to come!
Posted by bullymike at 9:49 PM

Sweet, glad to hear you did good. I think you did better than I did. Stupid mirror matches!!!

I'd be interested to see powerful necrons running around!

Sounds like a great time at Dragon's Lair. I haven't been there in 5 years now, but it looks like its running smoothly.

Glad to hear of the fun.