I brought the Stormlord and company to another 1250 tournament at Dragon's Lair this past Sunday and won first place along with quarter champion (snaps). I changed the list since the last tournament to include immortals and a couple lanceteks. 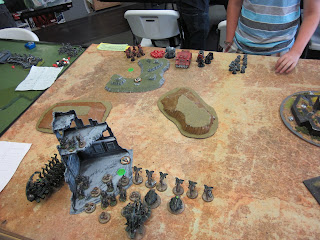 My first game was against Liam, a younger new player, who was playing with Space Marines. He had a couple tac squads and a rhino, a small regular terminator squad, a multimelta dread, and I don't remember what all else. We were playing capture/control, three seize ground objectives, and a third mission I don't remember either. I ended up with full points. 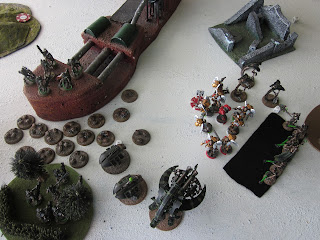 My second game was against Brandon's Blood Angels, where he was playing Dante, the Sanguinor, a Sanguinary Priest, and three squads of Sanguinary Guard. He had bad reserve rolls, even with Descent of Angels, and only the Sanguinor and 2 squads of guard (not Dante's priest squad) came down second turn. I think they probably wrecked the ghost ark before my return shooting and the Wraiths laid them all low. When the remaining squad came in, they fought me back a bit, but between the Tomb Spyders, Scarabs, and the Stormlord, I finished them up for the win. 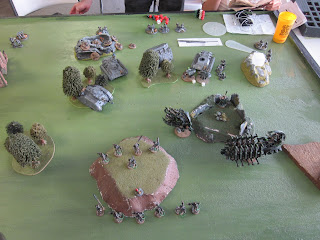 My last game was against an imperial guard player with an infantry platoon with a flamer command, two infantry squads, several heavy weapon squads, one or two squads of melta vets, two squads of melta command HQs, a basilisk, a leman russ demolisher, and a few chimeras. It was a very hard fought battle, with plenty of casualties on each side, and we ended up drawing two of the objectives and I won the third objective.

I came in first in the tournament and also took home the quarter champion cup. Necrons OP @ 1250!!! I really liked the small immortal/lancetek squads, but at the same time, I never benefitted from the Ghost Ark's repair barge ability since I only had the one small warrior squad. I thought the Stormlord worked out just fine once again at this smaller point level, and I still think his high point cost is well worth the multiple ways by which he can affect the game. Nightfighting at 1250, with generally fewer eyes/searchlights in each army, plays a bigger part than at 2000, but at the same time, the lighting power is less destructive. The second and third games were nailbiters, and even though the first game was a little one-sided, my opponent was a good sport. A good Sunday! Thanks to my opponents and the TOs.
Posted by bullymike at 2:10 PM

ooohhh sweet, what did you win? ;)