Wargamescon has come and gone once again, and here I am struggling to make any sense out of it all. I knew I should have written this immediately afterwards! I played in the Pairs Tournament on Friday, and the Championship Tournament on Saturday and Sunday. 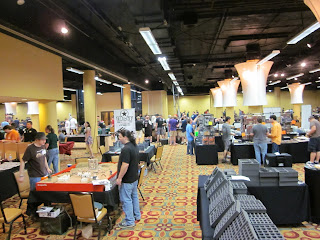 This year, the tourney was held at the Rennaisance Hotel in the Arboretum, and the convention hall was huge! There was Fantasy and Warmachine/Hordes on one side, and Flames of War, 40k Narrative, and several vendors on the other side, with the largest portion in the middle set up for 40k. It was great to have it all in one big ass space so you could browse all the shenanigans between games. The organizers did a superb job and I had a blast. 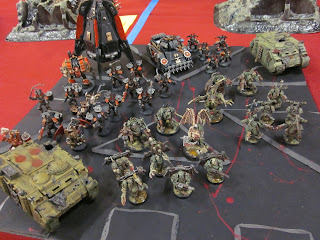 For the pairs tournament, I brought my Berzerker Blood Angels and teamed up with Kingsley's Plaguemarines. Here was our list:

We played first against a mixed Deathwing/Ravenwing (using Black Templars rules to cheese in the cheaper land speeders): 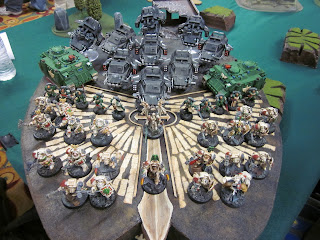 In particular, Dante and his unit attracted a ton of fire. Their reserves came in very scattershot and we were able to pick them off one by one. Late game contesting speeder shenanigans didn't keep us from winning this one. 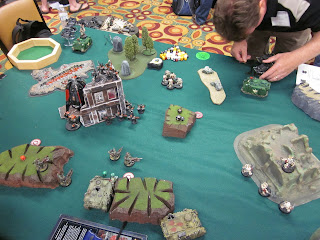 Second game we faced off against a duo playing space wolves/grey knights. There was some kind of random warping special rule in play which drove us crazy the whole time, and ended up scattering half my army (Dante's big unit) right into one of the wolves' firing nests. There was a big battle in the middle between my furioso, some plague marines, both chaos lords, and the grey knights' terminators/praetorians/whatever. We lost this one! 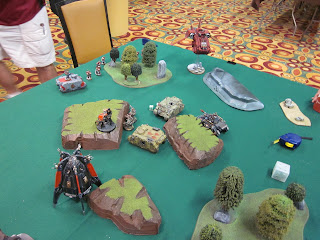 After a frustrating game, we found out we were matched against another local duo, Mike and Tyson, and decided to play a little Beerhammer. Any finished beer vessel must immediately be placed on the table, creating an impassible terrain piece that blocks line of sight: 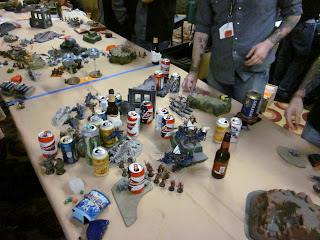 I'm pretty sure we lost, but I don't quite remember what happened at the end. Mostly. 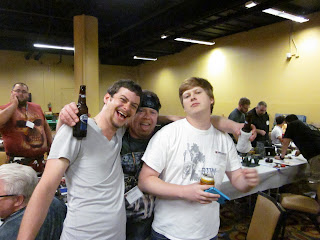 Here's a couple shots of the huge narrative tables: 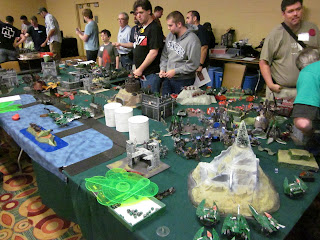 Here was one of the two amazing Tzeentch towers in play: 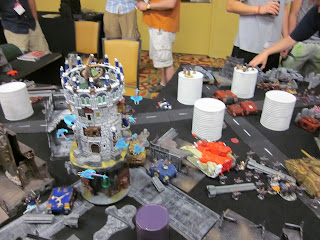 Here are some of the armies from the hall during the Championship: 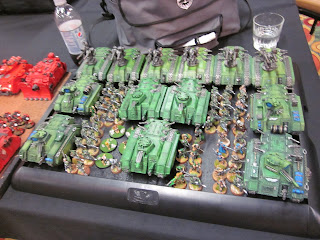 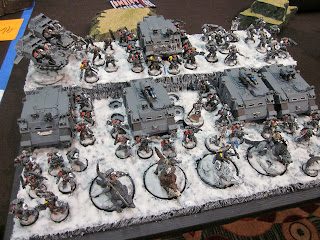 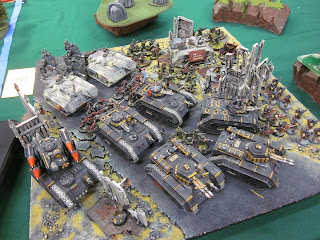 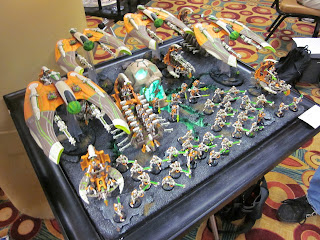 As always, Michael Strange brought a cool army. Then some dickass piece of shit stole two of his chimeras. If whoever stole them is reading this, I hope you die out of cancer. 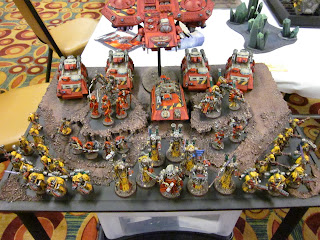 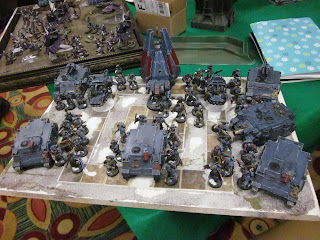 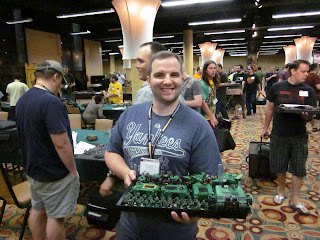 I spent several sleepless nights the week before finishing up a night scythe and an annihilation barge and brought my Necrons: 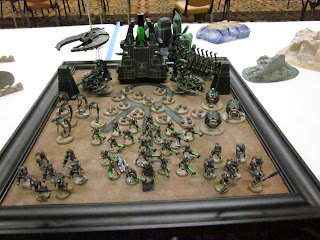 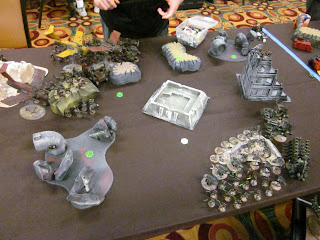 For my first match I was paired against Will's orks. He was playing with Ghaz, and a second warboss in a single battlewagon, a big nob biker squad, two or three 30-man boy squads, a grot herd, and three dakkajets. This was the first of several people I played against that were from Arkansas. I faced off against his Lysander/Tigurius marines last year. Not so lucky this year! I came in fast and loose and lost my big warrior squad right away to a single waagh dakkajet blast when I left them out of cover. My bargelord and the wraiths could not finish off the Nob bikers in time for the boyz squads to roll over everything and gave me a big size 20 donut! Down to the bottom dregs with me! 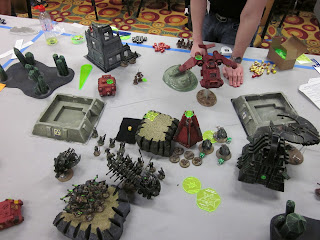 Deployment: Dawn of War
Primary: Annihilation
Secondary - Have the highest number of units within 12" of the center
Tertiary - Have a unit within 6" of the enemy board edge (both players can achieve)

Clayton was running Mephiston, a librarian with fear of darkness and shield, honor guard in a drop pod, a furioso with a magnagrapple and frag cannon in a drop pod, a furioso dreadnought with blood talons, one sanguinary priest, a 10-man close combat scout squad, a 10-man sniper scout squad, 2 flamestorm baal predators, a minimum scout bike squad, a stormraven, and a vindicator. Clayton had bad luck with his dice and reserves rolls, and I was able to repel most of his attacks on my center core while the wraiths and barge lord wreaked havoc in his backfield. I came out with full points. Clayton was a great sport and would love to play against him again.

No pic on this one. I think this guy's name was Brandon? He was playing with a space wolves parking lot nearly identical to the one I played at the end of the tournament. The game was just a little tense as a couple rule misunderstandings on his part led to an awkward start. I rolled up a bunch of razorbacks and rhinos with the scarabs, and disabled the rest of the vehicles pinned in his backfield. I was able to achieve the primary and tertiary but not the secondary. 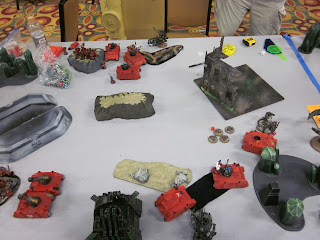 This was an exciting game. Norman was playing with Mephiston, a librarian, two sanguinary priests with combimeltas and lightning claws, four assault squads in las/plas razorbacks, one 10-man assault squads, two assault cannon baal predators, and two missile launcher devastator squads. This game started out horribly for me. First turn he spotlit and destroyed the ghost ark and annihilation barge. Second turn, he tank shocked my large warrior squad off the board edge and destroyed the monolith. While his assault squad and a couple razorbacks rolled both of my immortal squads in my center and left, I managed to fight off Mephiston and the baal predators with scarabs and the wraiths. My barge lord moved flat out for his table edge and just tore up his backfield real good. Just by himself, I think he wiped out two squads, a sanguinary priest, and a couple vehicles. My night scythe came on right at the end to contest my objective. He destroyed it, but then on my last turn they came back on the board to keep contesting. It ended up with us drawing the primary, he won the secondary, and we both achieved the tertiary because I only had the warriors and barge lord left! A nailbiter. 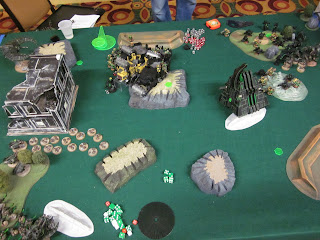 Deployment: Spearhead
Primary Objective: Capture and Control
Secondary Objective: Victory Points (300 point victory margin)
Tertiary Objective: Seize ground with three objectives, one in the center and one in each of the non-deployment quarters

I have to admit I groaned a bit when I realized I was facing off against Orks at the top of Day 2! Justin was playing with Ghaz, a big mek, two squads of eight lootas, a small meganobz squad in a battlewagon, three 20-man boyz squads in a battlewagon, and 15 stormboyz. I decided I was going to have nothing to do with the mean greenies and started off far in my own table quarter, keeping the wraiths, monolith, night scythe, and barge lord in reserve. He pulled far enough away so that when my reserves came on, he had to redeploy quite a bit to reach my stuff. The wraiths got tied up in the stormboyz defending his home objective but could just not overcome them, especially after the lootas jumped in, but it was a worthwhile distraction. The barge lord harrassed the center while my immortals, scarabs, and spiders fought off the nobs and boys attacking my home objective. Ghaz in particular got distracted going after immortals and I was able to slowly chew him up with gauss and tesla. It was a close game that turned more in my favor as time went on. I was able to teleport the big warrior squad through the monolith at the last second (immobilized on dangerous terrain!) and pulled out a 30-0 win in the last turn. 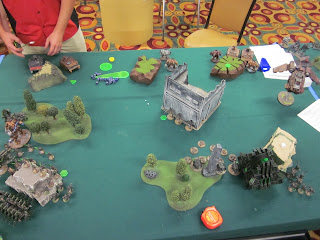 Another groan on seeing my matchup for this one! Grey Knights are not my favorite army to play against (maybe it's just me). Eric was playing with a librarian, Coteaz, two venerable psyflemen, two normal psyflemen, one dreadknight with a sword and incinerator, four three-man acolyte razorback squads, two five-man death cultist squads, and two stormravens. When he shunted his dreadknight all the way across the board and threatened to wipe out my big warrior squad with his incinerator, I had to charge it and fight it off with my overlord. In the first round of combat, the dreadknight passed the shackle test and knocked the overlord down, but he got back up again and finally overcame several turns later (the big bastard was great at making 5+ saves!). The bargelord then crossed the board and contested the two razorback units holding his second seize ground objective. We contested the center objective, we both got our home objectives, and I managed to defend my second seize ground objective. As it was, I won the primary and drew the secondary and tertiary. Tough game! 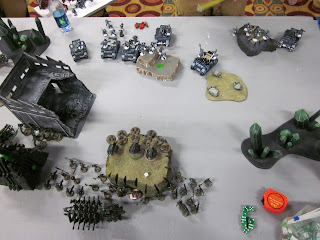 Unfortunately I forgot my third opponent's name, nice guy though (another Arkansan!). He was playing with a couple jaws rune priests, a couple razorback grey hunter squads, a few rhino grey hunter squads, and three big long fang squads. I neutralized two of his long fang squads early on and generally moved toward his middle. I think the main thing that helped me is that he was un-wolfy and pulled his firing line backwards when he should have charged in headlong. Anytime I got in assault with a big group of guys, he wiped me out. But it only happened once or twice, and by then those units had already destroyed one or two of their own. This was a great game for the monolith, which just pulled up into the ruined building and killed probably 10-12 grey hunters with the particle whip. I won the first two objectives and tied the other two. Good game! 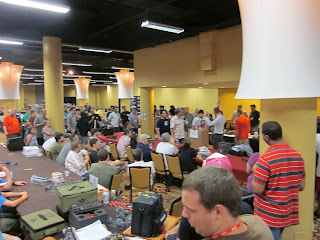 In the end I think I came out something like 5th of 118 in the b-bracket with all scores combined. I was pretty wiped out by the end, and very ready for sixth...

Psyche! You'll get nothing but fear and paranoia on 6th from me, but there's plenty about that on the internet already. It just seems a lot more laborious. But I probably thought that same thing five years ago. Oh well there's no going back for me anyway, too invested!
Posted by bullymike at 5:49 PM

Did you know you can create short links with AdFly and earn cash for every click on your shortened urls.