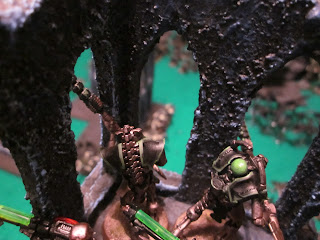 Just a few thoughts about 6th Edition and how it affects Necrons... the caveat being, my understanding of 6th is evolving so I might be getting some of these wrong:

The benefit of deep-striking during the enemy turn seems pretty clear now, allowing you the ability to actually do anything in the turn on which you essentially arrive.

Challenges should help get the mindshackle scarabs into the brains of important folks in a mass assault, which is good, since we can still get run over'd.

Thanks for the teleportation beam bonus!

Thanks for 4 hull points on all my larger vehicles!

Since Crypteks are characters, lanceteks can snipe folks with S8 AP2 lances on 6's, yay! I will have no compunction about trying to run away from a challenge with a cryptek. And since they have longer range anyway, there's no need for them to be in the back, so you can leave them last for allocating unsaved wounds. I still think that example for rolling mass wounds on page 16 ("Fast Dice") is pretty screwy.

Catacomb command barges! My lords fight from the barge? I can charge with them? They get +1 to armor saves? I'll leave the weave at home, thanks for 15 points. D6 hammer of wrath attacks from the dang thing?

It's hard to tell what kinds of rules TOs will keep in effect, like the nightfighting, but if it is always included, that's just more turns where Necrons are at an advantage. Solar pulses can either extend the cover benefits, or get rid of them in our own turns to pop a few more pimples with sniping lanceteks.

Scarab Swarms got what seems like a huge boost with the new movement and fearless rules. They move 12" in movement, they aren't slowed by difficult terrain and aren't damaged by dangerous terrain, and they won't be gakked by fearless wounds for losing combat, making them even more of a tarpit after they pop that landraider.

All glancing hits remove a hullpoint. In most cases, you need to pop three hullpoints to wreck a vehicle. Rapid fire guns move and shoot 24". Corollary: no need to pay for a phaeron anymore! What a useless rule now.

The Monolith looks like a perfectly fine choice now, since everything under a big blast hits at full strength! Monoliths can only snap fire with the gauss arrays after shooting the particle whip, but it's something! And I think it gets a 5+ jink save if it moves! Hilarious.

Gaze of Flame now gives +1 cover save to shots taken from within 8". It's not much, but I'll definitely take it!
Posted by bullymike at 7:14 AM

And finally the timesplitter cloak makes sense! He's there to trap characters in challenges! :)

yeah good call. an expensive trap though... I would personally only ever use him either paired with just the Stormlord hiding out in an Ark or with one of those Stormlord/Lychguard/Lord stomp units.