Workin' on the tau but thinkin' about Eldar!

The Commander hangs with the broadsides (giving them BS5 missile drones, ignore cover, and helpful USRs), who castle up along with the Etherealfish and Riptide behind Fire Warriors. The Kroot harass. Once major threats are dealt with I expand the sphere, so to speak. Hope to play my first game with them tomorrow and see 'wut it do.' I may drop Longstrike for 4 more Pathfinders and a blacksun filter for the Hammerhead, and maybe swap the Riptide's stim injector for skyfire and take a second Hammerhead instead of the Sky Ray. 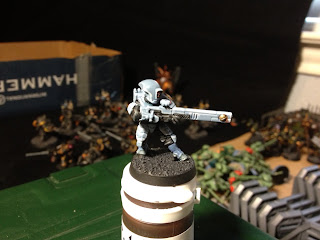 The plan is to add patches of snow and hay-colored dead grass bunches. That will take a while!

And my Riptide, rippin up what will eventually be a Crimson Fist or Ultramarines Ven Dread: 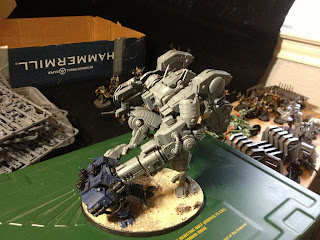 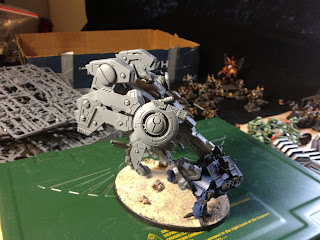 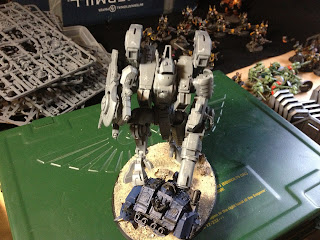 Posted by bullymike at 6:49 AM

Using a FW dread on a base... you crazy

It's been lying around since the first BOLScon... actually I posed him on the ground to be eaten by my Tomb Stalker, but the TS was so hard to pose I didn't end up using it for that.