Another year of WGC has come and gone, and I did about how I usually do. I went 3 and 1 the first day, and 2 and 1 the second. Tau are really fun and generally forgiving - up to a point. The biggest problem I had was achieving long distance objective missions; I was always able to turtle up and shoot the hell out of things, but sometimes my frontline troops would get eaten up, making moving forward and going after long distance objectives very difficult. Also, if you're having to deal with a bunch of big pieces of  LOS-blocking terrain in your way, especially like the shitty walled-on-3-sides 1'x1' buildings with no windows on the first floor that were all over the place at WGC, Tau can have a serious problem. Still, even when times looked most grim and my pretty blue fishmen were surrounded by enemy assaulters, supporting fire and storm of fire from the ethereal really whittle the bad guys down pretty quickly. I definitely learned a thing or two playing these games - I hadn't gotten nearly enough games in with them before hand to avoid making some key mistakes. But I liked all my opponents and gave em all great games. Nice meeting them all. 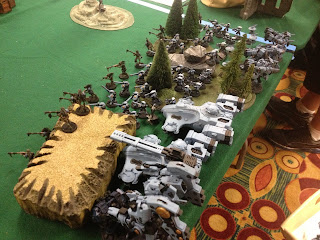 The commander/broadside rocket unit really does the heavy lifting for this army. I love rolling all those rocket dice. It will bludgeon its way through just about everything save AV14. Maybe I should just be more agressive in moving forward with my shooty horde. I did learn that the drone controller does not work for missile drones, which was an oversight on my part as I just assumed a drone is a fucking drone, whatever could be the difference? But no, not all drones are created missile. The hammerheads ditch out punishment and are pretty hard to take down at range. And SMS are really the shiznit. More on that later. 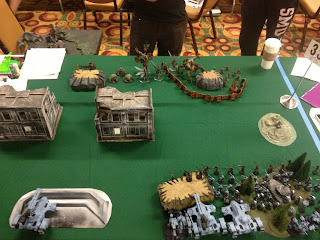 My first opponent, Ryan, had a nurgle-themed list with 2 great unclean ones, 3 beasts of nurgle, 4 plague drones, 2 x 10 plaguebearers, 2 soul grinders, a demon prince, 10 cultists, a helldrake, and an aegis with comms relay. I was able to take out 2 of his 3 scoring units and managed to repulse his more aggressive daemons before they did too much damage to my lines. My crisis suits scattered badly and so could not accomplish their mission of flaming his third troops unit before they got burnt up by the heldrake. I ended up with a modest win, 3 objectives to his 1, and neither of us got the relic. 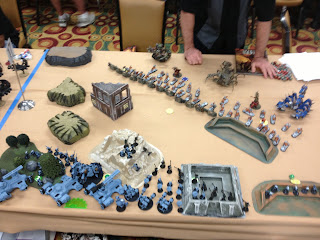 My second game was against Mark and a pure demon list including 2 khorne heralds leading 2 squads of 18 khorne hounds, 3 nurgle soulgrinders, a big squad of daemonettes, an aegis, and I think a couple more squads of plaguebearers. A lot of line-of-sight blocking terrain pressured me into deploying too close to him instead of far in my own corner where I might have bought a turn or two more of shooting. It didn't hurt that one of the big squads got a 3+ grimoire save for half of the game, and I spent every one of my turns dealing with the dogs. 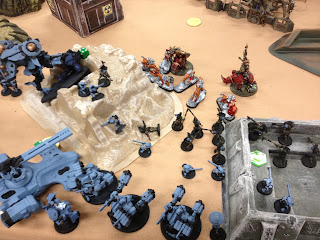 There were only a few left in the second squad when they multi-charged the kroot and fire warrior squad along with the riptide (I screwed up and left him too close to the front line for no reason). Naturally they killed a handful of kroot and fire warriors, and my whole lot were run down. By the time they were dead, I didn't have much left to fight for any of the objectives. I think I scraped up 6 points or so to his 20 something. Those khorne dogs sure are mean! 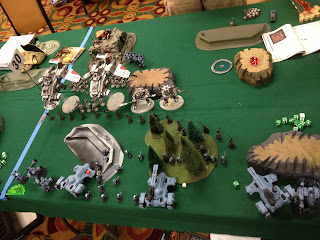 My third game was against John and his Grey Knights. He had a grand master in terminator armor, two strike squads in storm ravens, an interceptor squad, and two dreadknights. With the psychic communion, he coordinated a second turn wave assault with his whole army. His turn of shooting killed a lot of my troops, but even I was surprised by the amount of death a few half-strength squads of fire warriors can put out. Here was my turn 3: 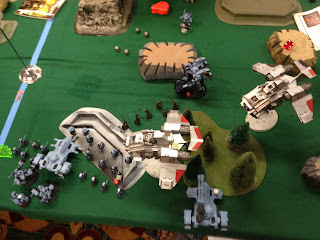 From behind the squad of kroot, I managed to wipe out his entire force minus a couple of strike squad knights, the two stormravens, and the grand master; for some reason he kept him alone standing on the hill in the back, and I picked him off with a hammerhead shot. The stormravens died as soon as they started hovering; one I brought down with rocket salvos, and the other got smashed by the riptide. After that, the riptide jumped over to his side and finished off the last strike knight. I got full points. John was a good sport and a nice guy. 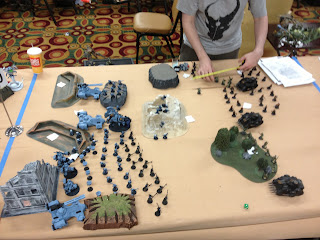 Unfortunately I don't remember my last opponent's name. He had a nurgle-themed army led by Typhus, 4 or 5 plague zombie squads, a small squad of plague marines, 2 baleflamer helldrakes, 3 full-las predators, a nurgle herald (I think), a squad of plague bearers, and 2 squads of blight drones (total of 3 drones). In the first few turns, I was able to take out all his troops save for 2 plague zombie units close to his long edge sitting on an objective. He deep struck Typhus solo behind my lines, but didn't get much done before I shot him down. I lost the riptide eventually, and took some casualties in my broadside unit, but I got full points on this one going into the second day. Predators are not easy for hammerheads, and it took most of the game to bring them down. 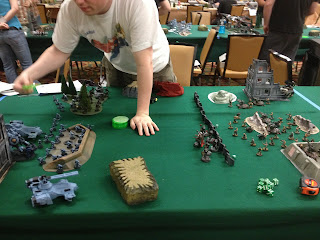 My assigned opponent was too hung over to show up on time (damn you Daniel!), and I got paired against american bad ass Paul Murphy and his imperial guard/space wolf army, featuring 3 spartan lascannon batteries, a thudd gun battery, a lord commissar leading a blob squad with a few autocannon teams, 2 manticores, a squad of veterans in a vendetta, logan grimnar, a rune priest, and 6 or 7 thunderhammer/storm shield wolf guard terminators. He really only needed the manticores and thudd guns to knock the hell out of almost everything I had in the middle, because by no means would I be able to make any moves into his deployment zone anyway. I wiped out logan and all his wolf buddies, and immobilized one of the manticores (greaaaaat), but I lost my entire center line along with the ethereal. He tried to make a late game grab for my third objective with veterans coming out of a vendetta, but I was able to take them out with fire from the kroot and the few smart missile systems I had left. The game ended on turn 5 just as I might have captured a third objective with my hammerhead (would have had to weather a storm of lascannons, mind you). He won by kill points and we drew on objectives 2-2. 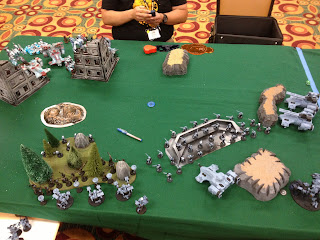 Ahh the relic. A weakness for me - since 6th came out, I have not wrapped my head around how to best go after the objective in Relic missions, and that definitely extends to Tau. I've won it before but definitely not consistently. I think my second opponent on Day 2 was named Gary? In any case, he had a triple-tide tau army, led by an ethereal and commander, 15 or so kroot, a squad of fire warriors on foot, 2 devilfish (1 with fire warriors, 1 with pathfinders inside),  3 total squads of 4-5 pathfinders, 2 broadsides (1 with railgun, 1 with high yields), and a sky ray. 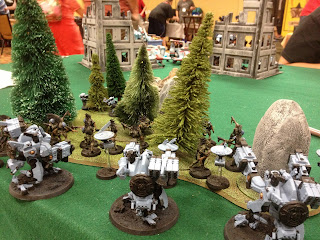 I got first turn and moved up, wiping out both of his non-embarked pathfinder squads, one of the fire warrior squads, and all but 2 of the kroot with my missiles and sniper fire. Making the rocket squad twin-linked and ignore cover is sweet like strawberry. I used 'monster hunter' on them to take out one of the riptides, grounded both of his devilfish and sky ray with 'tank hunters,' and let them kill the broadsides the old fashioned way. I grabbed the relic once or twice, but both times my grabbers died and neither of us held it at the end of the game; we both held our own home objectives. It was a draw, though I won first blood, slay the warlord, and the extra point for the ethereal. 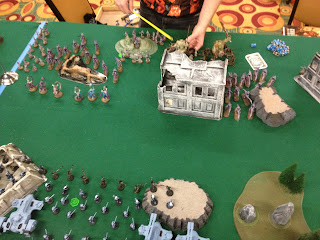 My last game was against Brian and his sassy riders of slaanesh: 4 heralds (2 with mounts, 2 without), 2 squads of 3 fiends, 3 squads of about 16 daemonettes, 2 squads of 13 seekers (which were led by the 2 mounted heralds), and 2 nurgle soulgrinders. I had flashbacks after setup to the game against the khorne dogs, and I was feeling the pressure. 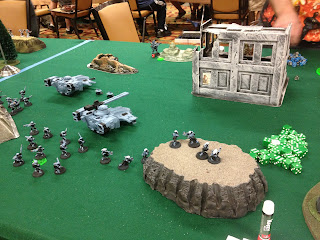 Fortunately slaanesh cav and beasts are badass in combat, but they're much more easy to shoot down. I ended up all but tabling him after his highly diminished charges crashed into my lines to little or no effect. The smart missiles found their way into the cracks and crevices to wipe out the unit of daemonettes holed up inside the 3-walled building in the middle. Love those guns!

All in all a good year, something like 4-2-1. Not sure where I ended up but it was probably somewhere just above the middle of the pack. Tau are pretty fun once you get that the real trick is to both turtle up well AND shift out of turtle mode effectively at the right moment. I'm still getting the hang of them for sure. I might be messing with Eldar for some time, but next time I take Tau out for a spin, I will more than likely include a second devilfish (and give both smart missile systems).
Posted by bullymike at 11:50 PM