I played in the usual monthly tournament yesterday, taking the Purging of Tir IV Witch Hunters/Guard list. I broke even, winning a slaughter first round, losing by slaughter the second round, and fighting out a draw in the third. I didn't place or anything but it was some good experience with the girls. 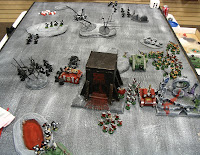 My first opponent, playing on the chaos board, was probably the youngest I've ever been paired against. After we straightened out a small issue with his list we set into the mission: Cleanse. I personally have had great luck with my witch hunter/guard army in cleanse missions, they can usually sweep out to become fairly intractable in the adjacent quarters. He had some small tac squads, assault marines, a small terminator squad, and a couple of devastator squads. I lost the Leman Russ when he rolled first turn and destroyed it with a chance glancing krak missile. My canonness and seraphim started the tourney out with a bang, jumping into and wiping out his assault squads with divine guidanced flamers and great rounds of close combat. The eversor (I forgot my own at home and borrowed one of Mkerr's models - thanks Mkerr) wasn't shy either and together my assault wing rolled him up from one side and almost all the way into his home quarter. My guard heavy weapons and Exorcist chewed up the terminator and devastator squad in the other adjacent quarter well enough to claim it as well. Witch Hunters win, victorious slaughter.

Second match was against Robert, again on the chaos board, who had a great-looking Thousand Sons army with a greater demon, nine double-wound terminators, two squads of flamers, two squads of Thousand Sons in rhinos, and a couple of predators. I rolled first turn and launched towards the center. My eversor was able to dash over to his lascannon predator and attach a meltabomb, but I rolled a '1' for the damage result and his demonic possession meant I accomplished absolutely nothing. I should have known from my previous match against a tzeentch army to approach them a bit more warily. I was able to tie up the lord of change with a single squad of sisters for three turns, but the sheer numbers and resilience of the terminators and flamers that teleported into the center of the table was too much for all the heavy weapon and divine guidance I could dish out. I don't know how much it would have affected things but I did forget about the sisters' shield of faith ability in the midst of all the tzeentch magic shooting around. Lesson learned. In the end, his many units near the center objective gave him a ton of points and I lost by victorious slaughter. 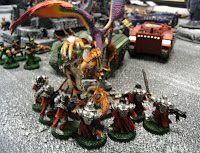 Here's a picture of the Lord of Change fighting my battle sisters. I know this came out pretty bad but it was a cool fight and the sharpen effect on my photoprocessor janked it up in a neat way.

My third opponent, playing on the desert board, was another basic space marine army, with a specialization in venerable dreadnoughts and terminator squads. He had a couple small tac and dev squads as well as a predator annihilator. I managed to roll first turn but could only stun the predator. Unfortunately the eversor had a poor avenue of approach and had to wait for the seraphim to catch up before moving in, screened behind some dummy chimeras. Later, both of his terminator squads deep struck into my left side, behind the seraphim. The assassin jumped to engage one squad, but the seraphim lost three of their number and i rolled double 6's to break and high tail it for my table edge. The next turn I forgot about the "light of the emperor" act of faith (allows them to regroup automatically), and they continued their exodus off the table edge, because I figured the enemy terminators were too close to allow my birds to stop and regroup. Aw shucks. A guard squad and sisters squad died fighting back the terminator captain and one of the dreds as they advanced on one of my objectives. Luckily on my last turn the sentinel and disabled exorcist jumped forward to contest the objective. On my right my cannoness and immolator shot up the very edge of the board to try and sweep around into one of his objective markers. They overran the commander and marine squad protecting it but the immolator was destroyed in our last turn, denying me the objective. After the dust settled, he controlled two objectives and I controlled just one. Technically the game was a draw but he was only short of a victory some 50 points. It was probably the most enjoyable game overall, with some great shooting and assault on both sides, and then a bystander pointed out my "light of the emperor" oversight in a way that was a bit irritating. If you want to comment about someone's mistake, something which I understand comes from a good place, i.e., you wanting to be helpful and share from your own experience, still - don't start the conversation out with "Can I ask you a question?" and say things like, "I was just really confused when you did that." If you want to discuss the issue, just come right out and give the advice you want to give. The studious, incredulous routine comes off as disengenuous and arrogant and does a disservice to the friendly and benevolent fellow enthusiast you may otherwise be. I appreciate the heads up, but I'm just saying.

No worries, it was three fun games, and I'm excited about getting my 2500 hereticus army together soon. After some advice and consideration, I'm going down to 8 seraphim to make both divine guidance AND spirit of the martyr more dependable in the early game. A squad size of seven would actually be the sweet spot - 81% to roll above and below seven with an imagifer or VSSS - but I like round numbers for victory points/scoring unit purposes. I converted three repentia into death cultists and swapped them, one sisters rhino, and two more sentinels in for the big ole repentia squad. Good riddance. I think it's the right decision. I got my servitors in and converted up their heavy bolter arms from three I had left over from guard weapons teams. Also in my order was my last chaos terminator, making ten in total.
Posted by bullymike at 11:27 AM

Why is it you never get a photo of your last game? :)