I was looking forward to the 'Ard Boyz tournament since it was first announced (to me, at least) at the citywide a couple of months back. I like to play the field when it comes to regular weekend tourneys, but I really wanted to optimize the chances of making it to the regionals. After some deliberation, I decided to play at Thor's Hammer, having had the most success with my Guard and Witch Hunter armies on their particular terrain boards. There was a total of 18 contenders, made up of some familiar faces, some strangers, and everyone stayed for the whole shebang, playing through to the end. The Emperor was shining down on my little coed company of heroes, and after three great games I came in at first place! Very satisfying, and I picked up some nice reinforcements for my future Eldar army. What's the prize at the crack smoking contest? More crack, of course.

With the increased points limit, I saw an excuse to add a servitor/chirurgeon Inquisitor retinue and Eversor/Death Cultist "demise" combo to my usual witch hunter/inducted guard list. I don't know if I always played them as described in the BOLS tactica, but these units were absolutely critical to my success today. Hardly anyone shoots at the inquisitor's servitors! I love it! Even though they're aggravating plenty of squads with BS4 heavy bolter fire, I think they just kinda fade into the background. Unless an enemy is totally committed to wipe out the unit (and devoting plenty of fire to a backfield pest unit rather than a forward assault/objective taker unit), the one or two wounds that come their way pretty much evaporate, especially with a cover save. I remembered many of the more elusive Witch Hunters rules today, with the notable exception of the Eversor's self-destruct. Verdammt! Such a complicated list. It just so happened that none of my opponents fielded any psychic offense, so the psychic hood was something of a waste, but I will still keep it to deal with Eldar and Chaos (and any Wierdboyz down the line). The liber heresius gave me table edge choice each match, and I rolled first turn in every game. Overall my luck was excellent, but I also had a couple of downswings that temporarily threatened to cast me into the abyss. Another big factor was surprise - few people are extensively familiar with the Hereticus' capabilities. But then again, noone expects the Inquisition! Burn the heretic! Kill the mutant! Purge the unclean! 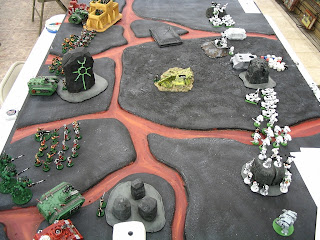 First round I drew the lava board against Russell's Star Wars Storm Trooper army (complete with galactic empire logo banners and a Vaderesque Emperor's Champion). The mission was seek and destroy (annihilation). I guess I just thought of White Scars as a vanilla dex list with a specific assembly of traits (bike-heavy), but Russell's armybuilder list was printed as if W.S. were a chapter with their own codex. Maybe the truth is somewhere in the middle...? In any case, it was a fairly diverse assembly of marines with a couple of small bike squads, a rhino tac squad, sniper scouts, rocket launcher dev squads, an assault squad led by a chaplain, a rhino command squad, and a venerable dreadnought. I was able to infiltrate the Eversor fairly far forward, and first turn he jumped around the center hill to cut through one of the bike squads, following up into the assault squad that had just jumped past. First turn also let me stop his command squad's rhino in its tracks, which was something of demoralizer for him. I used the Chimera and Rhino to screen out the scouts and dreadnought, wiped out the other flank with the seraphim and exorcist, and used the firing line to erase everyone else in sight. The death cultists didn't see any action but stayed around to counter-attack anyone who got too close. The eversor did quite enough by himself! In the end, I had nearly 2300 points left on the board and I had killed everything but the dread, the scouts, and one devastator squad. Witch Hunters win, massacre! 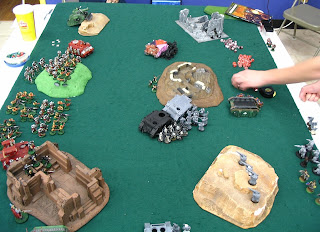 I had only witnessed Sam's Chaos Rhino Emporium from afar at Battleforge, until we were paired together for the second round on one of the felt tables, fighting the take and hold mission. First turn let me take down a couple transports right off the bat, leaving their riders stranded in the B.O.B. The other rhino squads drove forward towards the center objective and deployed behind them. With not much else to shoot at, I quickly took the rest of the empty whips out, giving him some permanent cover to huddle behind and wait to grab the objective. I hereby call that an ARR! (Artificial Rhino Reef). His havocs also became early target priorities, and I either destroyed or screened out both units effectively for the entire game. They also missed quite a bit (I have noticed that my own havocs fail to deliver in key situations, even though they're technically relatively good shooters), and only took out two of my sentinels and a guard squad. Other than my Leman Russ, he was unable to reduce my heavy firepower by much, and so his deep-striking obliterators and terminators didn't last too long once they arrived. Due to some poor placement on my part, he shot up the eversor early on, and though the two death cultists nearby survived to charge one of the marine squads, they didn't make much of an impact and were wiped out handily by the unit's powerfist champion. In the end, I had four scoring units within the center ring to his three, and won bonus match points for winning the objective. Witch Hunters win, solid victory, objective accomplished! 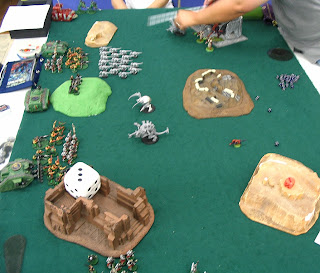 Third game on the same felt board, mission: recon. Steve had a big bug list with an even mix of gaunts and genestealers mixed in. Seeing as how I'd never actually played against a bugzilla list before, I don't think I consciously designed the witch hunter/guard army to deal with it, but in this game it felt pretty goddamn tailor-made. Not to mention the dice were hot for me, too. The canonness, seraphim, and sisters on my right flank repelled the flying hive tyrant, minifex, gaunts, and genestealers, while my left harrassed a venomfex and more genestealers. In the middle, my main gunline did their best to repel the approaching gaunts and various fexes. The large spinegaunt squad crashed into the two armored fist units, and were repelled or tied up in assault for most of the game. I killed a ton of fodder with mass heavy bolters early on, but even then I was cringing about the approaching wave of monstrous creatures about to crash on my shores. A couple of the large ones made it, but the citizen soldiers of the Imperium turned up the heat right at the last minute and wiped out everything but the guarded hive tyrant and less than half of the spinegaunts. When one of the last heavy fexes went rampaging into my retributor squad, the cannoness and eversor burst from the nearby building and charged into assault. The eversor wounded the big beast a time or two, but it was the canoness who used one last faith point for hand of the emperor to fell the big lug. I have no problem saying that heretofore I was pretty scared of the big bug comp, and while I don't know if I'll fare so well against it next time, it was nice to stand up to it at least once and come out on top. Witch Hunters win, major victory, objective accomplished!
Posted by bullymike at 10:58 PM

Congratulations buddy! So yall didn't use the special Ard Boyz Scenarios that were dispatched to the stores? Thats odd. I'll let you know what they were next time I see you, because the missions will probably at least be similar (or a similar level of weird). I got 1st at the Forge :)

hey thanks, congrats back at you. now you just need your own self-aggrandizing blog and you can be as big a douche as me.

yeah, I heard about yalls mission descriptions from frank's B&C posting and from another person from out of state. they weren't the same, however, Lar indicated that our scens were communicated to him by GW so who knows what the deal was.

i'm not ashamed to say that i was just a tiny bit relieved when most of the BFG wrecking krew (including your mekdar self) didn't go for Thor's, I know at least Mkerrrr would have been familiar with my army's strengths and weaknesses. Still, my ego is fairly inflated after beating the much-huzzah'd big bug list, even if it was a non-standard and perhaps not optimized version. That last fex I killed with the cannoness and eversor (can be seen in the pic approaching from the middle center) was really great timing - I had just sacrificed the retributors' vet sister superior to the big beast, and i used that one faith point to give the charging cannoness S7 with her blessed weapon to finish the fex off. she had already killed a flyrant by the second turn... her mantle of ophelia had prevented instant death from the one wound he inflicted at I5, so she was able to strike back and finish what mass divine guidanced bolter fire had started. obviously i'm biased, but in that last game they really performed spectacularly. we'll see in oct. how they hold up to your gang's lists, and those of others. if you want to get a practice game in at BFG sometime in the next 2 weeks, that'd be great, let me know.

For sure on the test game, maybe Thursday? Yeah I played against Bigbugs in the last round too (played by mkerr, actually). It was a really hard game but I scraped out a minor win. At the end I had managed to take out six of his 8 TMCs, and 5/6s of his genestealers. Sounds like you really have the faith down, which I'm pretty sure is the hardest part to get good at with Sisters.

I snatched copies of the three missions and I can PDF them if anybody is interested.