Twelve players, four from each major store involved in the tournament (Dragon's Lair, Thor's Hammer, and Battleforge Games), gathered this weekend at two of those stores to decide who really was "the Ace" (snicker). There were plenty of familiar faces: Becker, Kingsley, Sherman, and Dave (Cameron wtf?!), as well as some new ones. I finally had the pleasure of meeting Larry, a.k.a. Bigred of The Bell of Lost Souls blog, and I can report that he is indeed both a gentleman and a scholar. 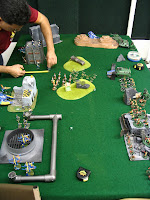 I was pleased to find myself facing Bigred for the first match, but that was only because I didn't realize what his Eldar army had in store for me. It was a very pretty collection of aspect warriors, anchored by an Avatar of Khaine. My deployment was pretty weak and good luck fled screaming as a wave of ouch engulfed the fightin' 14th. I inflicted heavy casualties on Striking Scorpions and Dire Avengers, but the combined forces of the Warp Spiders, Fire Dragons, and Falcon tanks tore all I had to shit, piece by piece. The only comfort I got was when my surviving veteran squad deep struck in (the first one had scattered off the board) and killed the Avatar with my last shot of the game. The big lugs may be immune to melta fire but plasma still does the trick! Here's Bigred's own brief rundown of the tourney, with some great pictures of his army as well as one of mine. Eldar won, victorious slaughter. 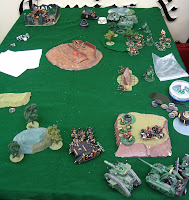 Joseph had a relatively mixed force of straight marines, khorne bikers, obliterators, a defiler, and havocs. He was irritated to have been stuck on the same table two turns in a row, and it got worse when I rolled to choose table edges and he was forced to take the same side, too. And a bad side it was. Lots of space for him to cross between his cover and mine. Still, the bikes and both marine transports made it to me, wiping out my left infantry wing pretty well, but the guard guns eventually proved too much and I destroyed everything he had. One of the vets scattered into a marine squad, but the other arrived to shoot up the same unit. Imperial Guard won, victorious slaughter.

Blast! I forgot to take a picture of this one, mostly because I was waiting for all of Dave's gated raiders and ravagers to arrive, and then once they did we were both a little busy. After downing a raider squad and busting his Sybarite's shadow field early on, insta-killing him with a multilaser, the rest of the game came down to a repeating sequence: Wyches would charge an infantry or weapons squad, slaughter it, and what happened next depended on my leadership roll. If the Wyches could follow up into another squad, things went his way. If not, I could usually shoot them up pretty well. Spreading my forces and making quick tracks into his adjacent quarters with chimeras and the hellhound diluted his nasty little gladiators nicely. The veterans did great in this game, killing the other HQ and a ravager. It was very close for the entire game, but he "solidified" a win by knocking out my Leman Russ on the last turn. Dark Eldar won, solid victory. 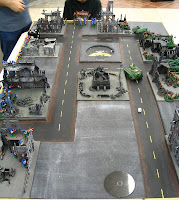 The second day of games went down at Thor's Hammer, where Frank and I drew the cityfight board for the first match. I haven't played too many games on this boxy type of terrain, and so I wasn't great at anticipating many of his firing lanes, with disastrous results. The Leman Russ was immobilized just rolling onto the table. Frank has a ridiculously powerful army though, something like a hundred marines with tons of lascannons and heavy bolters that picked enough of my units apart to build a large margin of victory. Ultramarines won, crushing victory. 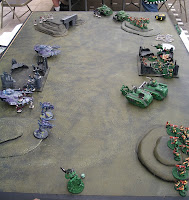 Amy had a mixed force of Eldar assault troops and heavy weapons, including banshees, harlequins, pathfinders, reapers, war walkers, a fire prism, and Mr. Big Gun himself, Maugan Ra. Honestly it was a pretty cool themed force but she had ridiculously bad luck. It was wide open terrain and I drew first turn, knocking out the Reapers and the howling banshees in their respective wave serpents, pinning them both. I also disabled the fire prism and one of the walkers. It was a tough place to come back from. I set up a nice screen for the hellhound, who accomplished his all-time favorite objective: burn Eldar pathfinders! Both squads of veterans performed well, and in the end I wiped out everyone but Maugan Ra. Imperial Guard won, victorious slaughter. 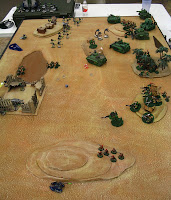 For the final match, I was paired against J.D. (or was it J.T.?) on the desert board. Other than a big squad of immortals, his army was fairly similar to Mack's. In other words, one of the main forces that influenced my composition. It started off quite well in my favor - I destroyed the Monolith with a sentinel lascannon and one of his two destroyer squads failed their WBB rolls after I lay them all down with the ratlings and other heavy weapons. His destroyer lord was a real thorn in my side, swinging wide around my left flank, sweeping through my heavy weapons teams and into my infantry squads trying to rush the center. When he teleported his immortals and foot lord into the middle of the table, my basilisk and demolisher blew them away completely with two direct ordnance hits. I had earned a win but I misjudged my lead (or maybe just got greedy) and rushed the two tanks into the middle to get their points back. Gauss fire and a tomb spyder's claws destroyed the demolisher and immobilized the basilisk. The extremely bloody game ended in a draw.

Bigred got something like five slaughters and one draw, taking the top slot. I believe I came in fifth out of the twelve players, not too bad for the Guard I think. Battleforge came away with the winning store trophy, Bigred won best general, Joseph won best sport, and I won best army. Woo hoo! Two years in a row! I got a nice trophy with a bronzey Tau battle suit.

I lucked out and drew six great games. Even the losses were still enjoyable and instructive. I learned the most about effective unit groupings and objective management. Using Chimeras to screen my battle tanks worked like a charm. The standard Russ would be better off with the dozer blade than the Demolisher, at least outfitted with plasma cannons. Hellhounds still eat Pathfinders alive.
Posted by bullymike at 9:41 AM