I joined in for another 2000 point tourney at Battleforge this past weekend. It was a good time, although I skipped out on the last game after being paired up against Mack. Basically I didn’t want to break his heart by slaughtering him in front of a bunch of strangers (OK, maybe we were both a little tired and hung over after staying up partying the night before). In any case, I think we were both bottom bracket and we play all the time so I’m sure we’ll duke the match out sometime soon. I brought chaos, with slightly larger than usual squad sizes for the berzerkers and havocs and a few less bloodletters and wargear. I also made the mistake of bringing c2’s chaos dice to use – apparently they hate me! 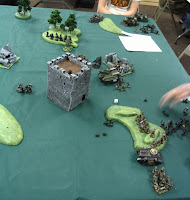 The highlight of the tournament was drawing K. in the first round and getting a chance to play against his bug hunting guard army. He’s not completely finished with the paint job but they all look awesome so far; everyone’s got sculpted chem-inhalers and tyranid armor and trophies all over them, and he’s got a small deathwatch team running around in there, too. It’s not a gimmicky army by any means but he’s pretty vicious with it so far as I can tell. We were playing basic annihilation with some kind of sunset action that was a little annoying to figure out in the hustle of a tournament. In retrospect, though, it was a pretty interesting variation of nightfighting and I might be inclined to replay it now that I understand the tactical effect better. The game itself was an uphill battle the whole time; he was able to infiltrate first and forced my hand a little bit when placing my havocs. As such they ended up out of cover and easy pickings for various storm troopers and weapons teams. He also rolled for first turn. I had a nice khorne attack wing ready to make a strong flank but the berzerkers went crazy, ran out in the open, and got demolished and inferno’d in short order. The bloodletters and bikes had a few kills but were brought down by mass fire after being left stranded out of assault. The demon prince dropped the deathwatch’s librarian (a side objective) but completely whiffed on the next turn and was killed himself by a commissar (three failed invulnerables in one turn - nice). The obliterators and terminators deep-striked (deep-struck?) in and earned me some satisfying victory points by shooting up the backs of his two main battle tanks and destroying them both, but since I had already lost so many expensive units it was still not enough to eke out a draw. He won a solid victory. 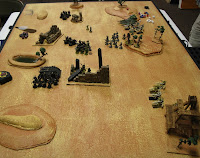 For the second match, I’d never met my opponent before and he didn’t seem eager to change that situation. I don’t think he was having that good of a time (except when he was winning) and he was pretty reluctant to meet me halfway on sketchy situations. Communication was stilted and he was always very reticent to declare what his units actually were until I specifically asked; I didn’t know his farseer was really Eldrad Ulthran until the last turn of the game (he kept calling him a spirit seer or something - he did use the actual Eldrad model but so has every other eldar player for the last ten fucking years). Whatever, people are different I guess, and his definitely wasn’t the worst personality I’d ever played against, but it was still a little stifling. Game-wise, I was making good progress until two things happened: I tried to attack the avatar with berzerkers (first encounter with one since the new rules - I6, WS10 and T6 is no fucking joke!), and also any luck I had left completely evaporated and I started rolling ones and twos at the end like nobody’s business, losing the rest of the terminators as well as the obliterators. The possessed were able to get some kills after being totally worthless during the previous game, and the 6 bloodletters somehow survived being hacked on by guardians, dire avengers, and the avatar for at least 4 phases of close combat. In the end I lost; he won a solid victory by some 10 or 15 points. Huzzah.
Posted by bullymike at 4:28 PM