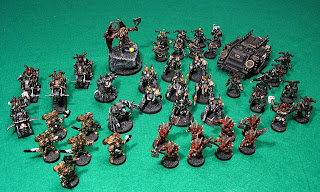 This army includes some of the oldest models in my collection, namely the possessed (old berzerkers) and the demon prince (bloodthirster). The terminator champion is a mix of an ahriman headpiece, a terminator champion body, an older terminator autocannon arm, Abaddon's left shoulder and trophy racks, and Jain Zar's glaive. The obliterators are the most recent addition. I never liked the heads that come with the models, so I switched those out with a couple of the plastic helmet-less berzerker heads. The demon prince has a rod going from his foot, through the prone space wolf, into the foam "rock" and the plastic base, where it's bent over and glued and taped. I heart pinning.

Against static turtles this force rocks pretty hard, but it has trouble with more mobile lists. It does have a low scoring unit and model count but in coordination they can start at one end and chew through quite a bit. Since c2 plays this as her main army, I've learned the most about their potential through 3rd party observation or by playing against them. The berzerkers and bikes run together toward concentrations of enemy infantry and hopefully away from vehicles. If they have an avenue of unmolested advance, the DP and possessed can really tear ass on vehicles or infantry, especially in combination with the bloodletters. Terminators, havocs, and obliterators are a stable, moderately charge-resistant firebase and usually do best overwatching the berzerkers and bikes as they make their assault runs.

I've heard almost all of the new codex rumors in bits and pieces but I haven't seen them collected in a meaningful way, so I'm not 100% on how these units will transition into the new list. My possessed will hopefully become khorne raptors, and the demon prince may have to switcho-chango a little bit... Can't wait to find out, in any case.
Posted by bullymike at 5:18 PM

Love the demon prince- didn't even know there was an old bloodthirster like that. Is he standing on a Space Wolf? Fitting perhaps.