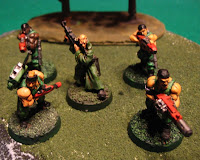 I'm messing about with a new guard list, switching out the special weapons squad for a deep-striking (or infiltrating) veteran squad. Despite my better judgement I brought sharpshooters back in, ditching the mortars from last game. What can I say, I roll a lot of ones and I'm tired of picking them out as losers. The close order drill is also sticking around, and anyways the price is right! I still don't particularly like the non-infiltrating command squads in the chimeras, but I'm backed up on modelling projects (nids, witch hunter retinue) and it will be some time before I even think about more guard minis. I think with BS4 and 3 anti-tank/MEQ weapons the vets will be more reliable than the old demo pack squad. They'll be trying to drop in and take out the backsides of big vehicles or walkers, or maybe harass small units of heavy infantry. I could throw in a hidden powerfist and honorifica on the vet sergeant (and use the old Ahhnold catachan captain model) but I'd have to lose one of the sentinels, and after recently painting up that third one I don't want to put it right back on the shelf just yet - I love that little pack of wolves! I already had a searchlight or two painted up so I filled in one last point giving one to a sentinel. In case of dawn I'll gladly sacrifice him so that everyone else can fire through the darkness.
Posted by bullymike at 9:13 PM