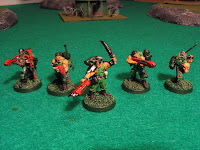 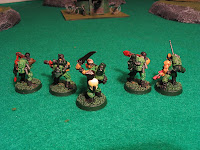 I made a few conversions today after tweaking my 14th Tiefwalder Combined Arms regiment list. The main list change was replacing both the 3 sentinels' lascannons and the fire support team's heavy bolters with autocannons. I switched out the storm bolters on the Chimeras for hunter killer missiles, added a heavy stubber gunner to the hellhound, and switched out the meltagun in the command HQ for a grenade launcher.

I adapted a few backpacks for my veteran squad and created a vet sergeant with the legs and torso from a vehicle sprue, catachan arms, and genestealer upgrade sprue (extended carapace shoulder pads and scything talon knife). He also has a genestealer skull on his belt and a toothed bolter (from a Space Wolves accessory sprue). I envision him as the sole survivor of a different Tiefwalder regiment wiped out by an encounter with my own splinter fleet. The 14th itself has not yet faced tyranids and hopefully "Patch" will give me some good juju going into such a battle.

I've also been working on the hive tyrant's paint job. He's in the final highlighting stages now. I finished the lictor and after going over lightly with 90:10 white:yellow highlights, I went back and applied the same look to the prototype genestealer and gaunt. It improved their appearance quite a bit so I continued on with the tyrant. Now I'm considering using some ultra-thin ink pens to add scores of tiny black spots in the yellow just around the solid black armored areas. I need to go pick up the pens this week.

Posted by bullymike at 3:38 PM

I like the Vet, nice conversion on the eye-patch...