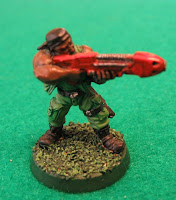 Private First Class Elias Jakob of the Tiefwald 14th Combined Arms Regiment received the Nikolaus Star for bravery, marksmanship, and perseverance in battle against the foes of mankind on Tiefwald, M41.61607. As his platoon attempted to secure defensive positions in the Wertherwald, his squad came under heavy fire and every other trooper in his unit was killed. Even after his nearby command element was wiped out in vicious hand-to-hand fighting by horrifying warp spawn, Private Jakob held his position and continued to engage the enemy with his plasma rifle, wounding a powerful demonic entity and destroying a traitor champion. He even survived a potentially dangerous weapon malfunction. For his inspiring display of skill and heroism, Private Jakob has been recommended to his commanding officer for HP (hinterhaltspflicht).
Posted by bullymike at 11:43 AM

Nice story for your awesome game.

would you believe i swept the rematch? i photo'd the wrong game! ;)