Excited about the psychic scream choir I’m building into Splinter Fleet Vivax, I refreshed myself on all things leadership. I couldn’t remember whether leadership was a kind of morale check or vice versa; fortunately it’s the other way around and all morale checks are specific types of leadership tests. That means those negative modifiers should work wonders when the enemy gets shot up, defeated in assault, whittled down to the last man, takes pinning tests from barbed strangler kills (yessss), or tries to shoot at the warriors or zopes hiding behind the mass gaunts. Even fearless troops have to worry about being pinned and subsequently rended.

Today I realized I actually over-counted the number of genestealers I own when making my last list, and was pleased to find that removing two from the broodlord’s retinue freed up enough points to give the sniperfex (ordered and on his way!) the reinforced chitin and bonded exoskeleton biomorphs. Sure, he would cost 208 points, but what a bad motherfucker! He’s got one pinning S8 AP5 large blast shot, two S10 AP4 shots, toughness 7, and 5 wounds. At initiative 1, I suppose his weakness would be powerfists, but if someone manages to maneuver an expensive multiple powerfist squad into a swarm of high-initiative rending bugs to get at him, they’re more than welcome to hack away at the big fella (I think I’m gonna call him Bumble). It’s also nice to have a smaller squad with the broodlord, as it will make things easier when I’m trying to infiltrate them behind cover 12” away from an enemy.

I painted up one trial genestealer and gaunt over the last couple of evenings, just to see how my paint scheme was going to come out. Here they are: 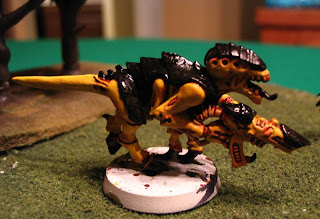 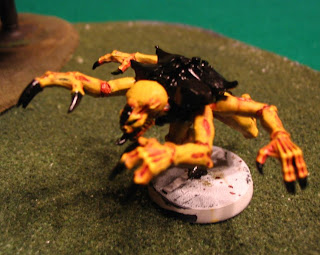 These are early versions, though, as I still want to brighten the yellow as well as add various black markings to certain skin areas to differentiate squads and give them more of a yellowjacket look. The gloss on the carapace is GW’s gloss varnish, which is really nasty looking stuff while it’s in the jar, but I definitely liked the finished effect. It does dry out pretty quickly, so I’m going to have to water it down more in the future. After I finish these, I've only got 97 more models to go!
Posted by bullymike at 5:01 PM

Nice scheme there. A whole horde painted to that quality will look very nice. THe gloss in particular turned out looking particularly... slimy...

thanks! yeah the gloss on these two was not watered down much really so it kind of slimed together. i'd rather have a totally smooth, shiny look.

did you ever read any of the old Aliens comics? There was one series called... Earth War? I think... anyway, they had a few "tamed" aliens that they used as living weapons, and they had these tattood numbers on them. i doubt I'll do it on my nids but it might be cool to make a similar sort of nid force. a crazy inquisitor does some kind of end run around the hive mind and tricks a swarm into doing his bidding. that's a bit of a fluff stretch but it might look cool for like a small killteam or 1000 point army.

Yeah, in Kingz' planned Inquisitor retinue for his Nid Hunters, he is going to have a combat servitor that will be a Gaunt kitted out with bionics and psyonic inhibitors or some such...

Nice painting mike. I got off my ass and painted as well. : D
By the way, the gloss varnish you are using looks great. I use it on my tyranids and my harlequins. If it is a little too shiny, try using some matte spray.
-Cam