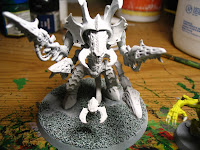 After some thoughtful consideration and a few tips from the 40k Online Tyranid forum, I've changed up my 2000 point tyranid list a bit, and I completed necessary conversions on 8 genestealers (used to have scything talons) and the dakka tyrant today. Now I need 2 more zoanthropes, a new plastic carnifex, and one more Macragge set of bugs.

The main point of this list will be to busy the opponent with 86 gaunts and genestealers while the scream choir/dakka elements move up and start "encouraging" reduced leadership checks. The sniperfex and zopes try to bring down mobile armor as they advance. I'm really excited about the first time I'll get to shoot with the tyrant. 12 twin-linked shots at BS 4, S5, AP5 that reroll to hit and to wound! Beautimous. The only thing I might do later is switch the lictor out for something else, maybe 2 raveners, tyrant guard, or a cheap living wall/screamer-killer 'fex so that I can put my beloved old model to use. I did change up the lictor's arms so that the rending claws are the top-most limbs, with the talons moved down underneath them. The look is a little different from the classic lictor pose but it matches the rending claws on my old warrior models as well as the genestealers. I had to do the same thing to the warriors because the newer devourer arm set didn't fit well on the top of the old pewter bodies. I think they all came out pretty cool. Everyone's waving their big ass claws around in the air. Hopefully when the time comes, they're going to party like it's their birthday, maybe even drink bacardi like it's their birthday.