I played in a tournament at Battleforge Games today. It was my first time playing there, all in all a positive experience. I took a 2000 point Imperial Guard list, heavy on the armor and light infantry. Well, fuck light infantry. Only two of the three missions even allowed infiltration and while it is nice to move more easily through terrain, I don't think I should be moving much anyway. Sharpshooters, on the other hand, worked like a charm. I think I would keep it even if it was proven to me that it isn't statistically worth the points. It works wonders for those times when a fistful of ones would otherwise ruin your morale. It turns a frown upside down, is what I'm saying.
There were quite a few people present, something like 12 or 13, including Pat, who brought his mess of greenskins. I walked by his table a few times and his big mobs seemed to be hanging in there pretty well. I myself held a draw for the first two matches and then lost my third game by a decent margin. 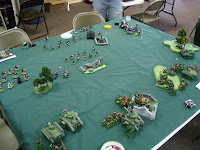 A. was rocking the Black Templars paint scheme but was playing a vanilla marine list, with a good mix of infantry and armored units supporting the centerpiece: a 12-man squad of terminators. It was probably going my way until his terminators rolled up my left flank. I saw it coming but had a few bad turns with shooting. Even with tons of lascannons and ordnance, it takes a long time for guard to kill 12 terminators (I only managed to get 6 or so before they started chewing up my line). In the end I think I was a little ahead in points but not enough for a victory. My favorite moment was when his 3 (just 3!) attack bikes absorbed shooting from over half of my forces for two turns before finally dying. I just barely saved my demolisher from meltadeath, even though it would be destroyed later. 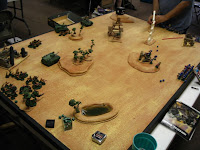 I had faced F.'s Ultramarines once before, and I knew about what to expect - a lot of heavy weapons fire from a lot of space marine infantry, followed up by assaulting veterans and jump troops. I think both of our plans were foiled when the mission was announced: patrol. Each army deployed only one troops unit with everything else arriving from reserve. That meant that most of our squads had to take at least one turn to move into position from off the table before they could do their jobs: shooting the hell out. Still, it made for an interesting pace, early turns blowing by with things thickening up late in the game. One assault team made it into my deployment zone in the final turn (a game objective), and I just barely had time to bring it down below scoring. It took a while, but I also enjoyed bringing down the lightning-clawed jump captain. Light infantry never came in too handy for this game and I began to regret not switching in mortars when I was thinking about it before the tournament. 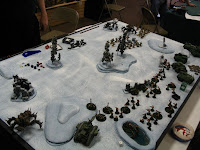 My last game was against C.'s uncomplicated but effective thousand sons force, consisting of several decent-sized rubric marine squads, two tricked-out defilers, and a 3-man obliterator team. It's always fun to drop tons of MEQs with my rocket launchers, but I made a huge error in allowing one of his defilers to scuttle up my left flank. I've never seen one fielded as an assault vehicle before and it took me a little by surprise. We called it a little early because he had to go to work but it would have just gotten worse for me anyway. Cool terrain in any case. The objective was a mite screwy but it kept things interesting.Overall I think the guard did OK, they lived up to their strengths but unfortunately they aso lived up to their weaknesses. I had plenty of frustratingly poor rounds of shooting, even after I bought some new dice to match the guard green. Fuck! I'm hooked on this silly shit! At least they were on the cheap side. After my first Battleforge tournament I'm almost positive I'll be playing there regularly now; everyone I talked with was friendly and really into the hobby. Plus there's a lot more open space, the prizes for winning are more generous, and maybe most importantly it appears to be the most popular spot in town right now for 40k gaming.
Posted by bullymike at 8:26 PM

You've hopped on the Battleforge Bandwagon as well now Bully? How could you leave D.lair after all the times it has been good to you??? Nah, I'm just kidding. Glad to hear you had fun at the tourny!

Well I'm glad we were able to sway you. I'm happy you had a good time. I'm sure I'll see you at the Forge...

Nah, I never said I was going to abandon DLair, but I do want to play more and start checking out major tournaments, so I need all the practice I can get. Plus it takes around 2 minutes less drive time for me to get to Battleforge. \