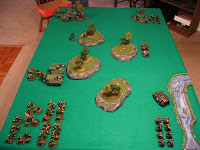 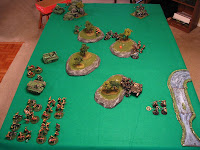 Chaos: The bikes roar forward and gain an invulnerable save. The Terminators shoot up one of the infantry squads across the field and kill five of them. They hold their ground, encouraged by the nearby command squad. The Havocs destroy the chimera facing them down on the other side of the battle and the command squad inside tumbles out, entangled in the wreckage.

Imperial Guard: The basilisk fires indirectly across the battle and blows up the berzerkers' rhino, pinning the passengers. The hellhound and special weapons squad moves up to put their all into killing the approaching bikes. Somehow they survive numerous blasts of gunfire and different templates; at least the demo pack didn't fall back on the squad! The last chimera and the right side guard wing opens up on the terminators, killing 4. The tanks on the other side try to shoot up the havocs but only one or two are downed. Already by this point I'd already rolled plenty of ones that could have used a reroll. 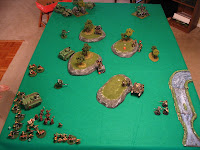 Chaos: The demon prince decides to join the fight, heading towards the main infantry formation. The bikes charge the special weapons squad, wipe them out, and consolidate further into cover. The bloodletters arrive next to the berzerkers and they erupt from the forest, charging into the nearest infantry squad. Losing but one of their own number, they kill all of their opponents and consolidate into another 10-man squad. The terminators open fire on the members of a further infantry squad, killing everyone but the plasma gunner, who stands his ground!

Imperial Guard: The Leman Russ demolisher moves up to reach the havocs with his main gun; unfortunately his shot goes stray and misses the chaos heavy weapons completely. The command squad from the broken chimera climbs onto the wreckage to get cover and shoot at the havocs next turn. The sentinels, hellhound, and Leman Russ open up on the bikes, killing only two of them. Mass infantry shooting kills another terminator. The basilisk drops an ordnance round on the berzerkers and kills 6 of them. Lascannon teams and chimera shoot up the approaching demon prince but can't do any damage. However, the lone plasma gunner passes his last-man-standing test and fires his weapon, inflicting a single wound on the prince! The bloodletters wipe out another infantry squad in assault (my guys killed another one though - thanks, COD!). The demons position themselves to move into another squad in their own turn. 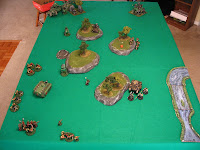 Chaos: The terminators move behind the hill and shoot up the infantry squad they can see, killing three more with reaper fire. The havocs and obliterators shoot up the front of the demolisher, destroying the main weapon and shaking the crew. The demon prince flies over a forest and lands behind the hellhound, exploding it with a swing of his enormous axe of khorne. The bikes and possessed again hold tight in forested cover near objectives. The bloodletters charge into the command HQ and lascannon squad, killing them all and consolidating into the second command squad just behind them. The last 2 berzerkers roll blood rage and charge out into the open.

Imperial Guard: The command squad rethinks their position and dismounts from the wrecked chimera. The demolisher rethinks its foolhardy charge and pulls its shaken ass back behind the forest. The last surviving infantry squads shoot the berzerkers, killing only one, with the plasma gunner barely surviving an overheat. Everyone else brings their weapons to bear on the demon prince and he is brought down in a hail of mass lascannon and heavy bolter fire from the sentinels, chimera, leman russ, and fire support squad. 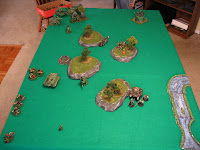 Chaos: The bikes retreat back behind their forest, passing their dangerous terrain tests (damn!), and the possessed further consolidate onto the nearby loot counter. The terminators kill off the infantry squad they've been firing at to a man, but the man in question fails leadership (the command squads were all dead too!) and falls back screaming with terror. The havocs and obliterators fire on the sentinel in the open, shaking it. The bloodletters finish off their last infantry squad but their consolidation roll isn't enough to take them into the heavy bolter teams nearby!

Imperial Guard: The stubborn plasma gunner passes another last-man-standing and shoots down the berzerker aspiring champion. The Leman Russ kills two havocs with ordnance. The mortars, chimera, fire support team and one sentinel wipe out the bloodletters. Couldn't have done it without those two close combat kills I got earlier thanks to COD! 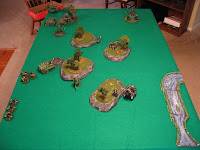 Chaos: The terminators climb aboard the rhino wreckage and into the forest. The havocs explode one sentinel on their side of the field, leaving only a crater behind. The obliterators destroy the main weapon on the leman russ.

Imperial Guard: The Chimera kills one more khorne biker, leaving only the aspiring champion. Shooting from the heavy bolter teams (just barely too far away!) and nearby sentinel can't bring down the terminator champion visible in the woods. The second sentinel on the far side climbs into the crater made by his dead colleague. 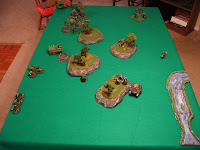 Chaos: The biker champion zooms away back into his deployment zone to deny the kill. The havocs somehow pick out the basilisk's obscured side in the distance and wreck it. The other two terminators climb into the forest and open up on the close sentinel, destroying it as well.

Imperial Guard: The tanks move to grab the nearby loot counter, demolisher and sentinel manage to drop one of the obliterators.

The game ends with c2 controlling one more objective than me, and together with the victory points she earns a solid victory!

Posted by bullymike at 4:48 PM

Nice rep. I see that you've commented on only one of my three posts, yet managed to include all of them in one. : D
Autarch is going well, I like my conversion and got to keep the model intact!
Fire Prisms: I have one and am currently proxying my falcon as another.

Trying to find the Best Dating Site? Create an account to find your perfect match.