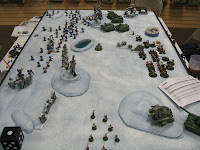 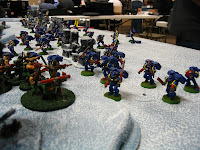 I played a game down at Battleforge last night against F., who I've played a couple of times before. We rolled the take and hold game type and I picked my side. The last match I played on this table I was on the other side against Thousand Sons, and it felt like too many lines of sight were blocked for me, not to mention it created a ton of ways for assault troops to approach unseen.

F. was rolling with some 82 marines, consisting of command squads, tac squads, assault squads, devastator squads, and scout squads. I switched out sharpshooters for a powerfisted, hardened fighter commissar in my command HQ squad. I would say the results of that decision were pretty even - many ones went by that I would have liked to re-roll, but the commissar finished off a lone assault squad survivor that was cutting into me, as well as inflicting the last wound on his flying lightning claw captain who was about to do the same.

I separated my main battle tanks and he was able to keep them running or shaken for most of the game. The regular leman russ in particular had some shite shooting. The hellhound got in one round of shooting before assault marines busted him up. The basilisk also went out fairly early. For some reason I decided to get cute and deep strike my sentinels, when I should have just started them on the board from the beginning. Only one of them got off a decent shot, finishing off the last member of one of his two devastator squads. The veterans, on the other hand, performed like fucking champs and burned four or five assault marines with plasma and melta fire. God love that BS4! Everyone else did about average, wiping out two whole assault squads, one each of his dev and tac squads, and a big squad of assault scouts. It was a victory for him, no doubt, but we didn't calculate the margin (it was fairly large, I'd say).
Posted by bullymike at 10:37 AM

Nice bat rep Mike. I hope to start seeing you on thursdays and fridays over at Battleforge. It's a nice store to game in.
-C