I played in the 2013 Dragon's Lair tourney of champions last Sunday and faced off against the top 8 players from the 2013 monthly tournaments, minus one or two that could not attend. I played with one of my latest 2000-point Tau incarnations, though I wish I had come up with my current Farsight build (more on that later) beforehand, because I think I would have had even more fun. As it was, I came away with first place after three tough games. The 'Cuda is always a lot of fun, and does really well at short range. Here was my list: 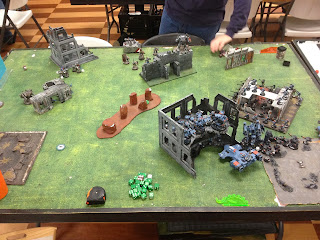 My first opponent was Matt, who I definitely respected as historically being the best Grey Knights player in the local community. He had tons of psycannons and plenty of boots on the ground: Inquisitor, Grandmaster, 6 or so Paladins, incinerator dreadknight, 2 psyfleman dreadnoughts, and a few rhinos. My crisis and stealth suits were fairly useless in this game, but everything else delivered a ton of fire into the grey knights line as they ran for the relic. 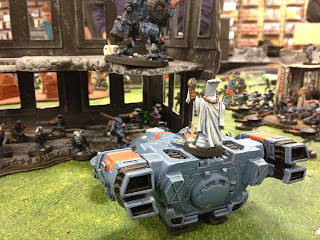 Matt ended up getting 10 points from the relic mission, plus a few bonus, and I ended up getting most of my 13 points from popping a ton of his combat-squaded units. The sniper drones were helpful in taking out the dreadknight, but it was the fire warriors long range along with the ethereal's pulse boost that generated most of the wounds I caused. 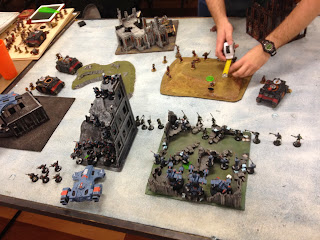 For my second game I faced off  against our local Sisters player JR. He was running Saint Celestine, Urea (sic) Jacobus, a Canoness, an inquisitor, a bunch of seraphim, dominions with meltaguns in an multimelta immolator, several small sister squads in rhinos, a big sister mob squad that ran with Urea, heavy bolter retributors, and two exorcists. This is a tough army that puts out a ton of fire, especially the retributors and the exorcists. He had a perfect start, seizing the initiative and scouting the dominions straight at longstrike, taking him out before he had a chance to even tie his shoes. His blob squad came on hard and killed most the kroot and pathfinders, and plenty of fire warriors. 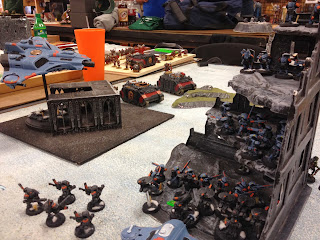 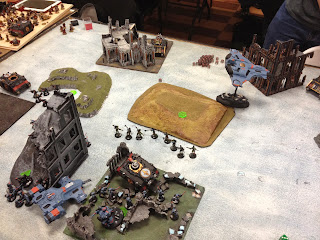 Still, there was still plenty of my stuff left so that when he got to mid-range for the mid-table objective, the torrent of tau fire wiped out one unit after another. I got max points and moved to the top table for my third game. 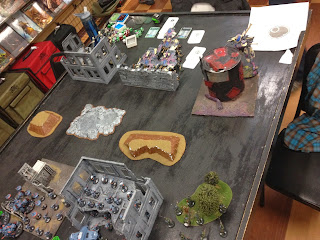 For my last game I played against Brandon who was doing well with an Eldar build close to or possibly the same as Darkwynn Nick's list that he used to win Feast of Blades this year. 2 farseers, 2 big guardian squads with 2 bright lances each, 2 D-wraithknights (1 as warlord), a small squad of rangers, 2 windrider jetbike squads, 2 7-man warp spider squads, and a nightspinner. We both had 3 objectives spread evenly across our own deployment zones, but being the more mobile army, he crossed the table quickly to come at me. He had a really good start when his warlord knight D-cannon'd my Riptide right off the bat. He parked one guardian squad in a 2-story building on his right, and charged at me with the other led by a fortune farseer. I wiped out the rangers fairly easily on the middle wall piece with SMS. He charged one wraithknight up on my right flank, and I took him out pretty quickly with pulse fire, sniper rounds, and missile pods. Both wave serpents kept the heat on and took out my pathfinders early on. The other wraithknight eventually strode forward, and despite heavy losses I managed to drop him as well (thanks in big part to the Barracuda). I eventually wiped out his aggro guardian squad and farseer. The game came down to the last turn. He was holding his three objectives with his surviving guardians and small jetbike units, and on my last turn I flew the 'Cuda over and dropped one jetbike, causing a leadership test which he promptly failed and fled. I ended up beating him by one objective along with more heavy support units killed (the 2 knights).

What I really took away from this tournament was that stealth teams are neat in concept but really pretty pointless, and that crisis suits that scatter are also very hit or miss for the points. But instead of spamming things or running some kind of triple-tide or taudar abomination, I've decided putting points towards improving the existing units in my army that usually carry the day. After all, Longstrike has proven well worth the investment with his tank hunters and BS5 bonuses. I've decided to go Farsight and drop the stealth team, field O'Shovah himself, and thereby make the crisis suits scoring and scatter-free. I have to pay the bonding knife douchetax, but in trade I get to have all the above PLUS the earth caste pilot array, which is like Longstrike for ion riptides, and the hexadingdong deny-the-witch doodad, which I have not gotten to use yet. Oh and my troop units can regroup even in teeny squad sizes? I wouldn't kick that out of bed. I had to lose intercept on the riptide and split fire on the broadsides, but like the stealth team, those have only been marginally useful in the games I've played with them. More often than not I count on the full volley of the broadsides to really finish off the tough units coming right at me or plug away at enemy scoring units in cover. And I rarely want to use intercept with the ion accelerator in the enemy turn when I'd rather take away cover from targets using pathfinders before putting down his big badass pie plate. More to come!
Posted by bullymike at 8:19 PM