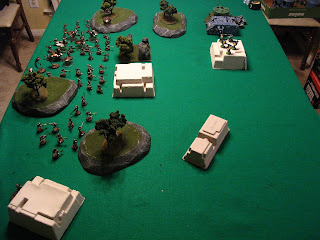 Before my buddy Mack moves out west, we decided to get one more game in and so revived an old rivalry between his Necrons and my Space Pups. His army consisted of two lords, one with a destroyer body, warscythe, phylactery, and res orb, and the other with a res orb, staff of light, and veil of darkness, four squads of ten warriors, two tomb spyders, three wraiths, six scarab swarms with disruption fields, five destroyers, a heavy destroyer, and a monolith. The Wolves had a wolf priest and a rune priest riding with eight blood claws in a land raider, a drop pod of four wolf guard and a battle leader in terminator armor, four wolf scouts with a meltagun and two power weapons, an AC/HF venerable dreadnought in a drop pod, nine grey hunters and a wolf guard leader with plasma and power fists in a drop pod, two attack bikes with multimeltas, and five long fangs including two lascannons, two missile launchers, and a pack leader. For our random mission we rolled "recon." Mack rolled to win choice of table edge, but there was a pretty even mix of cover on both sides. 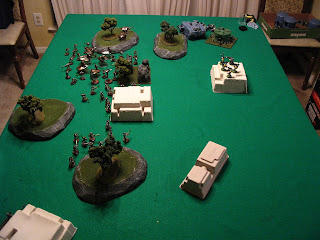 With the help of the venerable dreadnought's centuries of wisdom, I re-rolled to win first turn. Unfortunately there wasn't that much to do. The bikes and land raider wheeled around to my right flank, and the long fangs picked off a single wraith with their heavy weapons. Mack responded by moving everyone up and opening up on the aged wolves with a few of the destroyers, but his small opening volley bounced off of the space marines' armor. 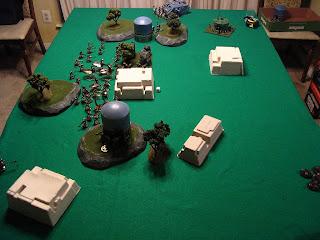 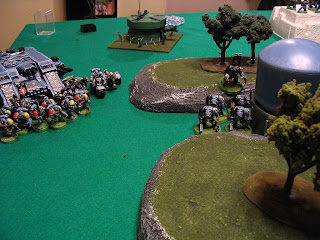 Half of my reserves came in on the second turn, with the grey hunters dropping in on the necron right flank, and the terminators supporting the units moving up on the opposite side of the table. The grey hunters were able to drop several warriors with their extensive collection of plasma weaponry, but most of them got back up in the next turn. The land raider moved up and disgorged two priests and the squad of blood claws, and together with the terminators and bikes they destroyed both tomb spyders with shooting. Eager for revenge, Mack's destroyers moved forward and obliterated the long fangs with heavy gauss fire. Warriors and the heavy destroyer took the grey hunters below 50% and sent them fleeing for their table edge. 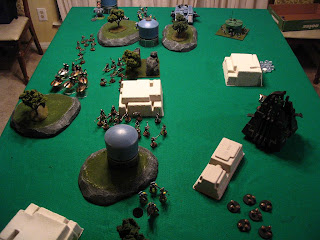 Unfortunately for me, the close proximity of a necron warrior squad meant the retreating grey hunters were unable to regroup as normal, and they continued to fall back a small distance. However, the wolf scouts arrived and pounced on the heavy destroyer, killed it in close combat, and ran to take cover behind a nearby building. The dreadnought also arrived and knocked down a couple of warriors with his assault cannon. The terminators moved forward into the woods and killed several warriors themselves with the same weaponry. The bikes and blood claws swept around the woods to be in position to help the dreadnought if he needed it. The land raider hung back for one last shot at any necrons trying to move into my deployment zone. The unit of scarab swarms and the monolith both arrived. The destroyers lit up the dreadnought but could only shake it for a turn. Most of the warriors downed by assault cannons got back up and managed to destroy a drop pod and kill off a wolf guard terminator with return fire. 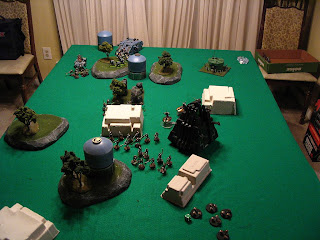 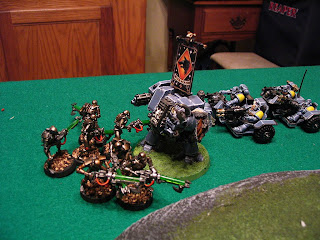 With all the foot traffic in the area, I wasn't sure I would have enough turns to get the land raider into his deployment area, so I wrote off any more shooting and moved the tank forward. The grey hunters regrouped and managed to inflict a few wounds on the scarabs, the only target they could all see. The terminators shot ineffectually into one squad of warriors, and the dreadnought charged into another, killing one in the initial round of assault. The necrons continued to move en masse towards my deployment zone, shot up the grey hunters and another drop pod, and second warrior fell in combat with the dreadnought. 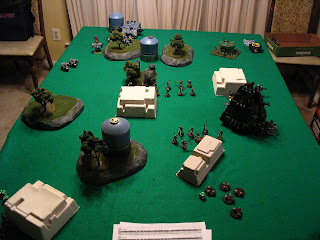 The bikes swerved around the melee for a couple of shots at the necron warriors moving away, completely missing their target for the third or fourth time in the game. The blood claws squad, terminators, and land raider pulled up further into his deployment zone, while the dreadnought grappled with the warriors for another phase with little result. The monolith teleported one warrior squad directly into my deployment zone, with the other squads not far behind. The dreadnought wrapped up the turn by ripping apart two more necrons in his assault phase and sending them fleeing off of their table edge. 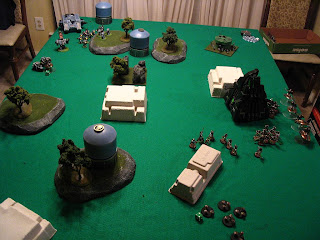 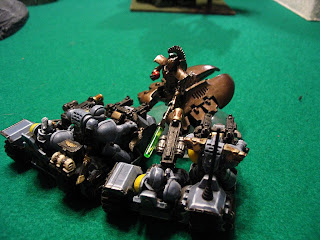 Everyone basically cozied up in their opponent's deployment zone, except for a single confrontation on his side (my side now, bitch!) that threatened to put the kibosh on the draw I was trying to hold. The bikes and dreadnought poured fire into the destroyer lord and managed to inflict a single wound. The lord responded by charging into the bikes, his warscythe swinging wide on every attack. The bikes weren't able to inflict any wounds back, so the combat and the entire game ended in a close draw, with Mack scoring around 150 points more than me. Recon might have made the game a little non-confrontational, but we still both had a good time getting the kills that we did. I think the flank is a good tactic for the wolves but I would have liked to have seen the priests and blood claws get into it a bit more. They should have held back and launched out of the land raider straight into his big group in the middle; with high initiative power weapons, sweeping advances, and a little luck, I might have even been able to force a phase out after a couple of turns. I love the re-rolls for first turn and damage results, but the venerable dread rarely ever gets his points back, so I might swap a vindicator in for him next time.
Posted by bullymike at 11:01 PM

The Dred did give you first turn after all...

Nice report. I will be looking at your blog from a distant land from now on.
heh heh