Ninja Pirates played host to a 2k Rules of Engagement tournament last Sunday. I took the newly inked nids and 2 objective markers. If you haven't played the RoE rules before, I definitely recommend giving it a try; a large variety of possible scenarios coupled with the freedom from having to tally up victory points at the end is the main attraction. The rules do take some tinkering to include in an effective tournament environment. The tournament organizer had changed up things a little bit, most drastically the way you capture objectives (you needed the most scoring units within 3" instead of simply the most models), and the all-or-nothing type missions were split into two possible points, but everything else was essentially the same. All in all it made for a very interesting set of games, with tactics playing a bigger role than the usual kill-or-be-killed smashups. Here was my list:

I got two wins and a draw, Jay got first place, and I lost the tie roll-off for "best general" (2nd place) to Cricket. Best army went to Frank's Ultramarines, speaking of whom... 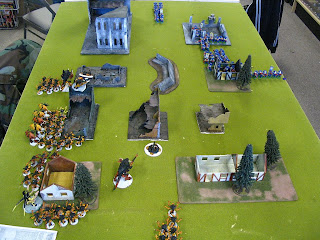 I've played against Frank more than a few times now (he goes by Capt tyranus on B&C), but I haven't actually beat him since the very first time we were matched up in the 2006 citywide. Shortly thereafter, he perfected his infantry gunline, and he's thrashed my guard and witch hunters on several occasions in the last couple of years. This time, however, the dice gods cooked up the perfect storm for him from the very beginning. First off, we drew a board with plenty of dense urban terrain, rolled for the small L-shaped deployment zones, and I got to choose the corner with the most cover. Then for missions, I drew "Unconventional Warfare," which by luck required me to defend my own two objectives (placed conveniently in or very near my deployment zone), while he drew "Assassinate," requiring him to footslog into a tyranid deployment zone (yikes), kill my HQ, and capture at least one of my objectives. I rolled to pick to go second, which was another big advantage in this case. He deployed his 80 or so marines at the edge of his "L" and began to move forward as quickly as possible, pausing to take shots at what he could see - mainly my carnifexes - while his flying Librarian knocked a few genestealers down every turn with Fury of the Ancients. At the same time, his big scout squad and assault marines picked their way through terrain and prepared to pounce on my objectives. For my part, I just waited for his inevitable attack and tried to use the barbed stranglers to take some of the shooting heat off my stealer broods (to little effect). In the last turn, two of his small las-plas squads, one assault squad, and the big scout squad moved to contest one of my objectives. I counter-attacked with the hive tyrant, my flying warriors, and a few genestealer stragglers. The hive tyrant and stealers managed to bring the scouts and one mini-tac squad below scoring, and then it was down to the warriors vs. the assault marines. After the first round of marine fists were unable to inflict much damage, I lucked out again and rolled 6 rending hits. With my two scoring units to his one the objective was mine! He also tried to contest my second objective with a lone assault squad, but I had too many genestealers covering that one as well and I took the win, 2-0. 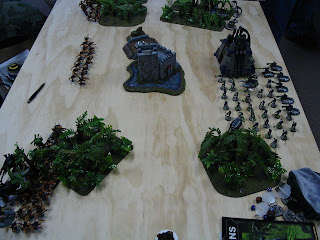 Jay had a very diverse and well-painted Necron force, including the Nightbringer, a destroyer lord, two warrior squads, an immortal squad, four destroyers, three wraiths, two heavy destroyers, two tomb spyders, and a monolith. I rolled the "Hold Out" mission, and he got "Firebase." He split his undead mess up into two main wings, with the star god, wraiths, and one tomb spyder holding his right side, the monolith and wraiths roughly in the middle, and everything else slightly to the left. I put my flying warriors and half my genestealer squads into objective denial mode, while the rest of the bugs concentrated on holding my own objective markers. The Monolith, wraiths, and Nightbringer solidly fought off my stealer offensive, while the rest of his force marched slowly forward to shoot up my right side and deny me the objective in no-man's-land. I tried to circle his far right flank with the warriors, but eventually the Nightbringer got in their way and I decided to charge in headlong. This time, the nightbringer was out of cover and the warriors got to go first, their rending claws luckily scoring just enough wounds to bring him down before he could retaliate. Now that's a trophy kill! On my right, I moved up the hive tyrant and several genestealer squads to assault his tight firing lines. The tyrant smashed into the front warrior squad, killing just enough of them to force a morale check, which they failed, and the big bug ran down the survivors with a sweeping advance. My genestealers ate up one of the tomb spyders and his accompanying scarab swarms, and then moved into combat with the immortals, killing a few of them before he teleported them away to safety with the monolith. It ended up a draw, with Jay and I each capturing both of our objectives. 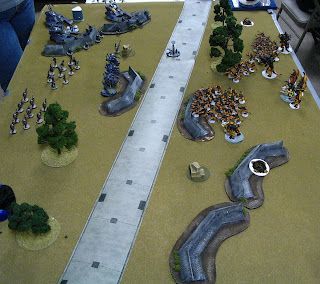 The third and final game was against Ames and the "Grapes of Wrath" Eldar. Maugan Ra led her usual two squads of pathfinders, howling banshees in a wave serpent, harlequins, eight or so warp spiders, three war walkers, and two fire prisms. My mission was "Unconventional Warfare" again, while she had to capture both of her own. We had the big triangle deployment zones. I figured I'd be better off closing the distance with Eldar rather than try to hold back and defend, so I lined everyone up on my deployment edge and hauled ass out into no-man's-land. The stealers on my right got stung early by fire prism and pathfinder sniper fire, and so instead I sent the flying warriors and big gun fexes to take that objective instead. Everything else, including the hive tyrant and dakkafex, jumped out into the middle to assault the oncoming warp spiders, war walkers, harlequins and howling banshees, and to take the eldar objective in the middle. One squad got in early with the war walkers but were tied up and couldn't inflict any rending hits to damage them. It would take another two or three stealer squads to gang up and bring them down near the end of the game. The harlequins lost half their number to shooting from the hive tyrant, and the rest were wiped out by a rushing stealer squad, who followed up into cover and were assaulted in turn by the howling banshees. Despite the initiative advantage gained from their masks, the banshees were repelled and fell back off of the table. Same for the warp spiders, who tried to take on the dakkafex only to get swarmed by more stealers. After some good low AP shooting inflicted some early wounds, Maugan Ra finished off the hive tyrant, but he too was brought down by the rest of the swarm in the end. She used the fire prisms to harrass my big gun fexes for pretty much the whole game, almost bringing them both below scoring capacity; a pity they couldn't return the favor, but for their thrice-damned holofields. After I had wiped out everything but her grav tanks, we called it in the fifth turn, with me succesfully capturing my two objectives to her one. I only realized on the drive home that the scoring stealer squad that had been assaulting her fire prism on her own objective should have contested the marker, as I had second turn and they were all clustered in the same place. No big deal, I just need to take my time a little more with the wrap-up. Chalk it up to the end of a long day, not to mention I was coming down with a cold (sucks).
Posted by bullymike at 9:27 AM

Two wins and a draw left you with nothing? Man that sucks but it is nice to see that the Warriors have been working out for you. Also that "Rules of Engagment" is a lot of fun to play and I think would make for a very interesting tourni!

Are you going to come to the Kill Team tournament at Dragon's Lair on Saturday?

@kings - ya it was a little anticlimatic but I got good practice in with the genestealers and had some fun games. the warriors did very well, if i can keep them away from shooting they can usually surprise and rend the shit out of enemies and absorb a decent amount of damage back. obviously killing the nightbringer was probably their high point this weekend!

@aventine - i'm going to try. never played it before but it looks cool.

Actually, I ended up third. Adam R. (one of the other Bug players) won best painted. I don't know who won best overall.

It's kind of funny, but I had the same kind of "perfect storm" scenario in game 2 when Jason's Tau had to come to my deployment zone in order to take my objectives away from me.

He made a good fight of it, just like I did against you, but he collapsed in turn 5.

A very fun tournament, but man was it long.

Hey Bully, you want to meet up on Thursday at BFG to test out some Kill Team games and get a better handle on the rules?

I know I don't know them at all.

Sounds like you had some good games. Sorry I couldn't make it up there.

Still haven't had a chance to clash wit ya hehe. I have been testing orks and I really like how they are playing lately.

@tyranus - if that was so, why didn't I get third place after losing the "roll off" for second? meh...

@chris - i'm prolly gonna sit out the kill teams. might be cool for friendly/lunchhour games but seems too overly complicated and open for abuse in a tourney. if they weren't using the boss/specialist kit rules i might be tempted but as it is, meh.

Did you know that you can shorten your urls with Shortest and make money from every click on your short links.