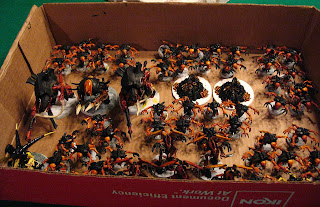 I inked up my tyranids this week. Initially I tried using Tamiya flat base matte medium mixed in with the ink and water, but after it dried it left a pale white stain in all the crevices and I had to go over the 7 or 8 miniatures I had completed with another coat of simply ink and water. This resulted in both of my big carnifexes, one squad of genestealers, and half my warriors looking a little "extra crispy." No worries, it's nice to be one step closer to completing the army's paint job, and I look forward to a few games with it in the weeks to come before I continue with the next color step.

BOLS has been posting a series of 5th edition "rumor" collections over the last few weeks. I'd be inclined to pooh them off completely if BOLS' prophetic clips from Warseer haven't come true so often (as long as I can remember). I've gone back and forth on how I feel about the suggested changes. At first I was worried that they would make it a more complicated and slow game, but the more I think about it, it's probably time for some changes about now anyways. At the very least they won't be reverting to a 3rd edition-style revamp, where all the old codexes are void and the new rulebook includes basic (read: crappy) versions of the army lists. The cover saves for vehicles sounds like a good deal. Maybe the nerf for SMF will be mitigated by skimmers being able to hide easier in cover, firing from cover saves more easily than other vehicles. All the other vehicle rule changes (defensive weapons, movement and firing options) are too complicated for me to their really grasp their implications just yet. The scattering blasts will take some getting used to, especially the way multiple blasts will be scattered. At least we can forget about partials and centering the blast over a single model. Still though, I agree with one of the commenters on the BOLS article in that many of these rule changes seem made for the sake of themselves rather than directly focusing on improving the 4th edition set. They do seem to fit well with the style and nuances of the most recent codices (eldar, chaos, orks).

After dusting off the Space Wolves last week, I'm really eager for them to release their updated codex, White Dwarf version or no. Hopefully I won't have to break, convert, or paint too many models to update my army lists. I'm keeping my ears wide open for any rumors about the new shit.
Posted by bullymike at 8:49 PM

Should be fun Saturday. I see those objectives of yours down there.

I do have to say, bugs kinda scare the shit out of me...

Holy genestealers! What are the two mounds of tentacles on the larger bases about center in the picture?

Yeah, almost every update to this list has included more genestealers. I'm up to 48 right now. Bushido, I wouldn't be to worried. I'm still learning how to rein all these fuckers in. Looking forward to another last round matchup!

I don't know if you knew this but I used to play Space Wolves back in the day of Rhino Rushing. I am looking forward to their update... I think it is about time and I hope to see less powerfists in every unit.

Nice job on the bugs BTW.

So how did that Tournament go today?