Today I played in the first tournament of the 2008 season at Battleforge. They might not be able to update their webpage worth a crap (ha!) but they definitely run a decent tournament, with thought-provoking missions and great prize support. The only downside is that there's usually a shit ton of power armies, and the 'eavy version of their competitions, which will be run in odd months, promised to be more of the same. I decided to start the year off with a painted army, and I've been tinkering around with a new guard/allied WH inquisitor and eversor build, so I took the green machine out for a spin, deep into hostile territory... 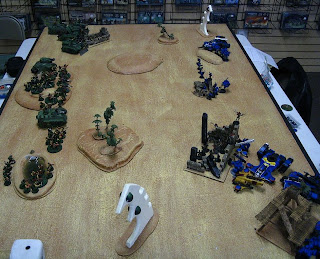 My first game of the day was against Daniel and his Tau. The primary objective was field of battle (essentially alpha recon), with secondary points awarded for holding table quarters and killing an enemy HQ. He had a battlesuit leader, two squads of elite battlesuits, a big squad of kroot, two fire warrior squads in devilfish, a pathfinder squad in a devilfish, a piranha, a hammerhead, an ion head, and two broadsides. In addition to all the smart and seeker missiles fucking me up from behind hills, he was finding all sorts of janky lines of sight across the board with his railguns. I failed every obscured roll I tried, and eventually my armor was whittled down to a lone demolisher. I managed to tank shock the kroot squad and send them running for a few turns, theoretically giving my eversor assassin cover as he launched a one-man assault into some crowded ruins in his deployment zone. I say theoretically because goddamned tau pathfinders managed to force five armor saves on the eversor, somehow only wounding him once, while his own poorly-rolled return attacks managed to kill just one measly pathfinder. The galactic badass died the next turn after only dropping a couple more. Daniel earned a shitload of battle points and I earned none. The end. And yes, I'm pissy about this game! 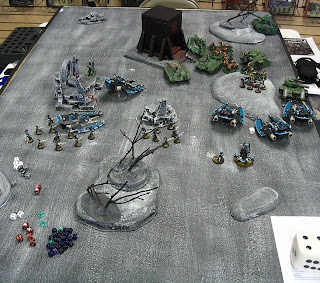 Chris is like my personal "boss monster" right now, and there will be much rejoicing when I finally defeat him (and I will!). Besides his posting on BOLS, he's started his own blog at crusadedude40k.blogspot.com. I'm pretty sure he was using the same mechanized eldar list as last time, and I knew it would be an uphill battle so I just tried to use the opportunity to learn more about what worked and what didn't against his grav-powered rolling pin. The main objective was take and hold, with additional points for destroying the enemy's most expensive unit, and more for having your own uberpricey bastard destroyed as well. I was only able to shake a single falcon before his attack wing was knocking at my left flank, shooting my infantry core up with scatter lasers and shuriken and dumping fire dragons and harlequins, all the units doing what they do best in horrible concert. For my part, I managed to basilisk one squad of fire dragons into oblivion, kill about half of one of the avenger squads, and destroy another avenger squad's wave serpent. On the last turn I finally managed to bring down his star engined falcon (his suicide unit) with a miracle missile from my very last surviving infantry squad. Other than that it was completely one sided and he wiped out everything I had. More ouchy! 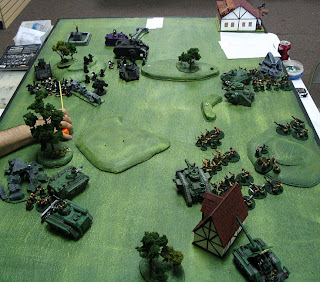 My last game was against a newcomer who brought his mostly painted Black Templar army. The completed pieces, like the champion for example, were quite nice. The list itself seemed like a characteristic templar mix: an emperor's champion, a sword brethren squad led by a chaplain, a venerable dreadnought, four neophyte/crusader squads including one that was twenty strong, a lascannon razorback, a land raider crusader, and a lascannon predator. It was an interesting game, but we were both moving a little slowly and only got three full turns done before time was called. I learned a lot about that big ass LRC - specifically about the machine spirit, and how it can fire a weapon even if the vehicle moves over 6". I was able to glance it a few times with my big guns but overall my shooting was horrible and his advancing army took few casualties before slamming into my lines. I don't know how competitive BTs are overall, but I was definitely impressed by their special rules in our game, especially the one that allows them to move closer to you when they take any shooting casualties. For a space marine army, there was a ton of bodies on the field and the cheap neophytes absorb casualties for what seems like fucking ever! The sword brethren on the other hand never really had a chance to get into the game; I only ever saw them shoot their bolt pistols a few times. For fun I talked him through getting the most victory points he could in the last turn we played. Another sweep for the sheisse Tiefwalders! Get fucked imperial guard!
Posted by bullymike at 7:54 PM

Its good to hear you enjoy playing against me no matter the outcome. I think that in general your IG might be better suited to playing in the hobby tournies, where the power curve might not be so steep. With the fluff you have, plus the painting, I think they could do very well. That said, I also look forward to your Chaos coming back soon, because I think they're pretty cool.

Also, thank you very much for the compliment on my Eldar army over on my blog.

"no matter the outcome"? very few armies enjoy more than one outcome against mech eldar. I fuckin hate it too :)

Heheh... Well again I missed playing you, even though the army I brought isn't that fun. We need to play a game at some point. I am not looking forward to painting my orks. Yuck.

But poop on the first game. Sorry it sucked. I got some revenge for you during the second game hehe.

Did you know you can shorten your urls with Shortest and make money from every click on your short links.