This was my first time playing a standard monthly tourney at Thor's, but I was familiar with the boards from the citywide matches. I had two and a half great games with the Tartaron Witch Hunters list and came in second out of 9 people. I had actually won best army right off the bat just for having the only fully painted army!

Matt had a terminator HQ, an inquisitor with several gun servitors, a vindicare assassin, four squads of Grey Knights, two heavy weapon dreadnoughts, and an annoying orbital bombardment. My liber heresius worked on its first go round (Rommel, you magnificent bastard! I read your book!) and I picked my side, but they were fairly even terrain-wise (the desert board). Half of the grey knights advanced slowly while the other half parked in cover and rained down psycannon fire. Their shooting, along with that lance strike targetting the oasis where my infantry platoon was stationed, did a small amount of damage, and the immolator was immobilized early by the inquisitor's retinue as well. In the end, the callidus' arrival and some great exorcist and lascannon shooting (destroyed both dreds) turned the tide. The seraphim wiped up behind the callidus and jumped into his deployment to grab recon points. His terminators deep struck close to my lines but time was called before they could move in and do the same. The hammer of the witches never dealt any wounds to his inquisitor. I just noticed a rules mistake I made - if ordnance scatters behind a hill, out of LOS, any folks underneath the template do get cover saves for the intervening terrain. That was my bad. I don't think it mattered in the end, as the victims in question weren't brought below 50% scoring and they were too far away for their storm bolters for nearly the whole game. Witch Hunters won, solid victory.

This was the half-a-game. I didn't grab a picture because my opponent quit early and it slipped my mind. David brought two hammerheads, one sky ray, several squads of fire warriors with devilfish transports, pathfinders with a devilfish, two squads of two battle suits, a squad of six stealth suits, two squads of gun drones, and two HQ battle suits. I was a little nervous at first, since we drew the cityboard and he had so much anti-tank, but by the end of the first turn I felt pretty confident. He went first and moved his grav tanks en masse towards one of my two guard/sister groups. He laid down some serious markerlights on one of the infantry squad and used the tanks to light it up, wiping it out. Stealth suits, Fire warriors, battlesuits, and a railhead all shot at the seraphim and the chimera, but only three ladies were killed and one chimera was shaken. The smoke cleared and I still had plenty of guns left. I stunned one tank, shook another, and knocked down both squads of battlesuits with guardsmen and the exorcist. The seraphim jumped forward and opened fire, sending the stealth suits fleeing for their table edge, but not far enough to avoid the subsequent charge; they failed their morale test and were wiped out. The seraphim were left in a great position to run rampant among the tau infantry line only a block away. At this point he wanted to call the game, feeling a bit tired after a long night shift. Bummer! Witch Hunters won, victorious slaughter. 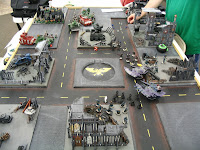 I had a great time playing against J again, this time fielding his wife's eldar army, slightly modified to his own specifications. The most noticeable change was a second fire prism - I don't know what he got rid of to fit it in because otherwise it seemed like nearly the exact same army. This was a very tough match (on the cityboard again!) and J played with skill, but I really made some stupid errors that caught up with me in the end and denied me a win. First and foremost (I cringe when I think of this), I deployed and charged my Callidus assassin into a squad of pathfinders in cover. In my zeal to include a vehicle along with the squad in her neural shredder template, I totally brainfarted and forgot she did not have frag grenades. Did I mention the fire prism had already just been shaken? Honestly, she had no business charging a target in cover in the first goddamn place. Total amateur hour; I should have gone straight for the dark reapers that were standing exposed in front of the other fire prism, recovering from being shaken on the previous turn. When she totally whiffed with her CC attacks, all it took was a couple of failed 4+ saves and *doink* there goes 120 points, sacrificed to kill one silly pathfinder. Garr! The exorcist also bunked right at the end, failing to inflict 4 simple wounds on a squad of banshees, banshees for chrissakes, and he was able to contest that adjacent quarter. Losing the leman russ to a prism shot in the butt wasn't too fun either. His rear armor was something like five inches in cover, and of course I failed the obscured roll, *boom*, adios. I did finally manage to destroy both of the fire prisms' main weapons. At the last minute, I charged forward with the seraphim to repel the dark reapers that had creeped into the other adjacent quarter. The alien scum were purged by the righteous firey breath of the emperor! Alas, their death screams attracted the attention of the dread phoenix lord Maugan Ra who had just taken off around the corner on the last turn. He wheeled in place, sprinting back to the battle, and leapt to pounce on the angelic seraphim, his giant powerblade swinging with dealth... but suddenly, the end of the round was called. Maugy stopped short, slung the maugetar around his back and popped open a beer. Time to mack on some ladies... All quarters were contested and the game ended in a draw.

That left that bye bastard Kingsley in first place (shakes fist), myself in second, and J in third. Great games, and I learned a lot more about the hybrid guard/hereticus army. For todays games the construction was pretty solid, fairly mobile with a nice thick firebase that can stick together or spread out and slog down the approaching enemy, ideally from hard cover. The callidus I covered already (jeez). The exorcist, when not playing anti-tank, just cannot be counted on to serve a properly filling meal of infantry death just by itself. It needs the heavy bolters of the russ or guard infantry heavy weapons to clean up the mess it leaves behind. Those dozer blades came in handy in each game and were well worth the points. Plasma guns are still a (fun) death sentence for imperial guard. The seraphim are awesome! I think I was just careless with them in the past. Those divine guidanced flame pistols are total ass in a can. Whoosh! The immolator was the one letdown this tourney; I never once got to shoot the flame turret as it was immobilized early in two games and didn't have time to play a role in the other. A squad of retributors or, more likely, an upgraded inquisitor (LR, HotW, psychic hood) with a gun servitor retinue would be more useful. I guess it was good for soaking up fire, considering how much everyone loved to shoot at it. As for the venue, Thor's was really laid back and supportive, and it was a great day overall.
Posted by bullymike at 8:02 PM

Did Jay still use the three walkers in his army?

I don't see them in the picture you took and they are the obvious choice to take out in order to make room for the 2nd Fire Prism.

Sounds like a good tournament. It's nice to see Thor's is still attracting a good turnout for their tournaments.

Congrats! on 2nd AND best army by the way.

Yes that's exactly right. I remembered shortly after I posted. With the winnings I picked up a fire prism of my own! Dun dun dunnnnn...

yeah I am bye/got a bye. what are you gonna do about it?

feh! enjoy your silly ravenwing box. i'll just paint my own and it will be glorious, you'll see! you're just lucky we didn't get paired, my girls would have put your bug hunters to shame.

Did you know you can create short links with BCVC and make cash from every click on your short links.