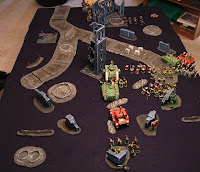 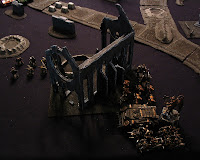 I changed my 2000 point list from last weekend's Thor's tournament to switch out the armored fist squads' autocannons with lascannons, and removing the infantry command squad's lascannon to include two meltaguns and a plasma gun. I planned on driving them around in the back of the immolator to hop out and deliver some low AP fire. c2 ran her usual chaos army. 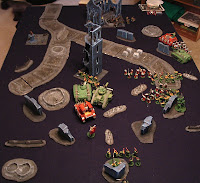 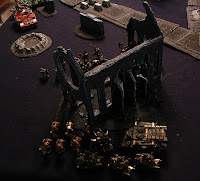 Witch Hunters: For the first time, my inquisitor's liber heresius failed to work and c2 was able to pick sides. I rolled to get first turn, however, and tried to get my money's worth working on the only squad I could see: the havocs. I used "word in your ear" to move the chaos heavy weapons out of cover and opened fire on them with the leman russ, sentinel, and infantry squads. Five of them went down. The seraphim, immolator, infantry command squad, and one of the chimeras moved up on the chaos flank.

Chaos: The berzerkers roll blood frenzy and go screaming through the ruined church toward the immolator. The demon prince moves into the ruins along with the obliterators. They try to shoot the seraphim with heavy bolters but fail to kill any. The havocs blow up the immolator's heavy flamer turret. 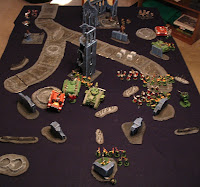 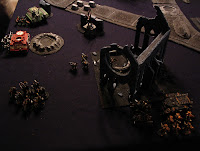 Witch Hunters: The berzerkers were exposed so I tried to pour fire into them while I could. The leman russ, the nearest chimera and several infantry squad lascannons shoot up the squad, killing five of eight. The exorcist pulls out around the other chimera and puts four blessed missiles into the obliterators, inflicting two instant deaths, wiping them out. The immolator moves further up the flank, staying in between the havocs and the seraphim. The callidus assassin arrives, kills two khorne bikers with the neural shredder, whiffs in close combat, but survives another turn.

Chaos: The demon prince jumps from the church ruins to a nearby wall. The terminators deep strike in and open fire on the seraphim, killing four. The havocs wreck the nearby chimera. The possessed jump in with the bikers and kill the callidus. 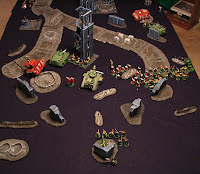 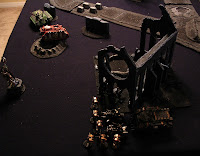 Witch Hunters: The seraphim jump into the terminators, flaming them up good, but they fail their divine guidance faith test and only one is killed in the shooting phase. The busted immolator moves up and the infantry command squad tries in vain to wound the demon prince. The sister and infantry squads move back to avoid being charged. The exorcist manages to pick off the berzerker aspiring champion with six rockets. In close combat, the seraphim use three different faith points to kill three terminators, only losing one of their own. The chaos terminators fail their leadership and are wiped out by a sweeping advance.

Chaos: The bloodletters arrive only to scatter off the table! The demon prince bounds over the immolator to take revenge on the seraphim. The surviving havocs and berzerkers pull back into the church ruins. Four of them are killed quite handily and the last breaks and retreats towards my table edge. 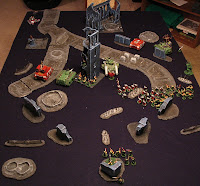 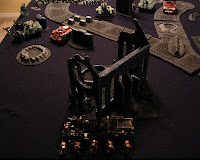 Witch Hunters: The command squad and sentinel try to shoot up the demon prince again but can't inflict any damage. The exorcist and leman russ burst forward to get close to the chaos-held quarters. The last seraphim continues her retreat towards my table edge.

Chaos: The demon prince lays waste to the command squad and regroups behind the wrecked chimera. 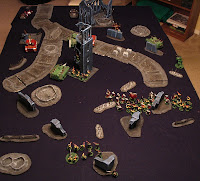 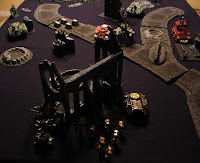 Witch Hunters: The last seraphim flies off the table. The exorcist and leman russ drive full bore into the chaos home quarter, and the immolator races away to avoid the demon prince. The rear-most infantry squad moves over into the adjacent quarter.

Chaos: The rhino drives out from behind the church to cover the possessed and bikes from the exorcist, shooting its smoke launchers. The demon prince moves closer to the retreating immolator. 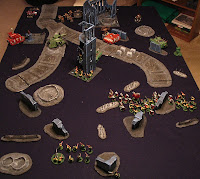 Witch Hunters: The leman russ drives far into the chaos quarter to avoid the demon prince's charge. The immolator tries to turtle up, backing into a nearby wall and leaving its best armor to the outside. The exorcist destroys the rhino regardless of the smokescreen. The sentinel moves into the adjacent quarter.

Chaos: All the hiding chaos elements burn out into the open to secure quarters at the last minute. The demon prince brings down the immolator with several swings of his mighty axe of khorne. The havocs in the corner of the ruins destroys the sentinel.

Some good rolling on my part and bad rolling on c2's part left Witch Hunters with a solid victory - but just barely! She maneuvered well to overcome some early setbacks and severely reduce my margin of victory. I've found that boldness rarely pays off with the fragile witch hunters and tried to keep myself from getting too greedy.
Posted by bullymike at 8:56 PM