The second week of the campaign featured a lot of soon-to-be traitor legions whupping up a little overzealously on faithful worlds. Given that the names and places of these have been described in more detail in the fluff than most of last week's matches, the stuff I wrote up beforehand didn't really apply. Oh wells, I still had a couple of interesting games against two tough legions with the 2000 point witch hunter list I brought.

My first game was against the Luna Wolves, playing the Rescue scenario, as they swept the wounded Warhamster, er, I mean Warmaster, to safety from one of the moons of Davin. My forces represented the Davinite Cultists, in the middle of a surprise attack on the Wolves' positions. I inflicted a few casualties in the beginning, and I believe my Seraphim and sisters managed to drop one of the special characters, but his drop pod squads really made the whole thing a non-starter. Once he discovered the correct token, Abe's drop pods were able to land directly onto the objective, shuffle it around in his marine squads and move it backwards. I didn't take any pictures, as the DreamBlade boxes he pulled off the rack and used for his drop pods just looked a little too retarded to be captured for posterity. I mean, I understand you do what you have to do, but I just think posterity would have been disappointed. Anyway, after he moved the objective out of my reach we called it early, Luna Wolves win. 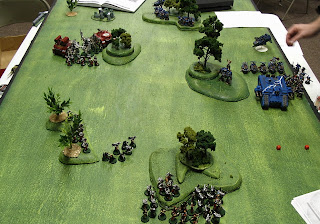 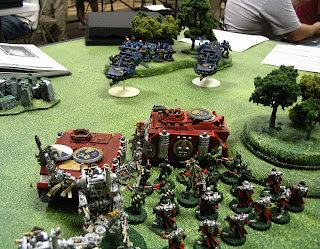 The second match was against Jon's Night Lords, as they attacked the previously compliant Imperial world of Anargo. We played an alpha night fight mission. Nightfighting was always in effect, using table quarters as the objectives and deployment zones. We both deployed in two main wings, his bikes, vets, dreadnought, and assault squad heading towards my seraphim, assassins, repentia, sisters, retributors, and inquisitor retinue, and on the other side,
his infantry squads and land speeders against my exorcist, penitent engines, storm troopers, and another squad of sisters. I managed to play rope-a-dope for nearly the entire game, inflicting damage on units here and there and trying to stay out of his grasp. It was a very challenging game; perhaps without Night Fight I might have been able to get enough early shooting in to prevent myself from being so inevitably overrun. Probably the most fun part was launching into the oncoming bike squad with the last few repentia and two of the death cult assassins, wiping them out, then sweeping into his deep striking terminators and teaming up with the Seraphim to take them out. The Eversor and third death cult held off the veterans and brought them below scoring. I was contesting every quarter until I failed four or five armor saves on my retributors in his last turn, bringing them below 50% and giving up the home table quarter. Night Lords win a really great game. 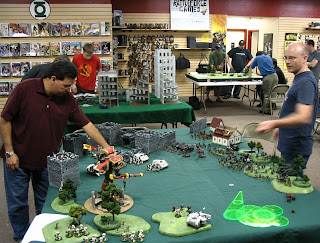 I witnessed my first game of Apocalypse being played between Mkerr and Bigred from BOLS. It was a massive 5000 point battle pitting a ton of Death Guard and a titan against a large Witch Hunter/Guard force. It looked very cool but perhaps a little tedious, but as I was playing my two games I didn't really watch enough to get a feel for the mechanic. You can read Red's specific comments on the game here. The BOLS rundown of 30k Week 2 is here.
Posted by bullymike at 10:13 PM

This is Russell here, who you played round 1/White Scars on the first 'Ard Boyz. How'd you do in the second round?

Just stumbled across your blog.

It's not so much that White Scars were a different codex as much as Space Marines have the traits that let them slightly modify the existing codex.

Needless to say though, I didn't have much luck (and I'm still a newer player) so I've switched over to the Blood Angels codex. We shall see what happens.

Hope to see you around in a post-Thor's world!