Dire Portents this week, as the Warmaster gathers to him his most trusted brother Primarchs and their legions. During an attack on forces loyal to a traitorous planetary governor, the Death Guard and World Eaters discover a strange ziggurat near a former listening post in the (apparently) frozen wastelands of Istvaan Extremis. As they begin to search the area they come under attack by a human army led by a potent mutant psyker, a.k.a. the Warsinger, a.k.a me! We decided to represent the Warsinger with a model from Aventine's collection - his zealot leader - using the mutant psyker rules in the Witchhunters codex. In exchange for her cost plus the three available psychic powers, the Death Guard took an additional land speeder. It was a rather poor trade in the end for the soon-to-be traitor legions... muahahahaha! 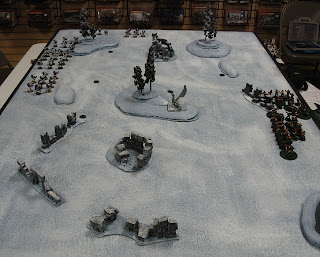 For our random special mission we drew "Rescue." The legion players, Bigred (Death Guard) and Adam (World Eaters) decided to use the corner deployment, choosing the one with the most mystery tokens nearby. Apparently there's some dispute over whether your opponent has to also use corner deployment if you do, but it wasn't worth bothering about so I just used a corner too. The Death Guard and World Eaters color schemes looked really great together as they deployed their tac squads along the inside borders of their corner. I basically mirrored them with my infantry squads. It would be a dead sprint to find the right token! 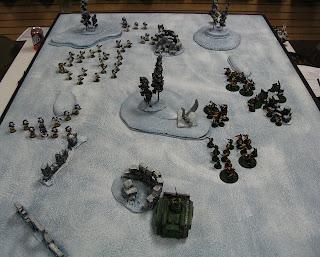 I rolled to go first. Given the corner deployment zones there had to be a lot of movement before anything really heated up. However, at the end of the second turn, I turned over the very first token and it was the objective! The Warsinger's quarry (a mysterious box) was very nearly in her possession. Of my reserves I only had my hellhound and one sentinel come in. The rest of the Istvaan guard infantry moved forward and hunkered down to wait for the approaching legions. 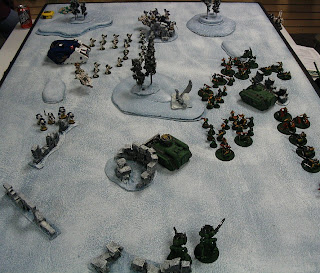 Turn 3 saw the arrival of the command HQ elements, including heavy weapons and mortar teams, as well as the last two sentinels and one of the veteran squads. My heavy tanks were still waiting in reserve! The squad with the objective passed it off to the command squad behind them. The HQ chimera drove out to supplement the forward lines, and most of the infantry squads got shots off at nearby enemies, dropping a few marines here and there (no thanks to a succesful prayer from Garro as Bigred used his special faith point to give the big Death Guard infantry squad invulnerable 3+ saves). The hellhound helped to inflict heavy casualties on the large World Eaters tac squad, but shortly thereafter a Death Guard landspeeder arrived and killed the flame tank with a precision multimelta shot. The legions' precious Land Raider arrived chock full of Berzerkers, including Khârn, and moved up towards the main event about to go down in the center of the table. 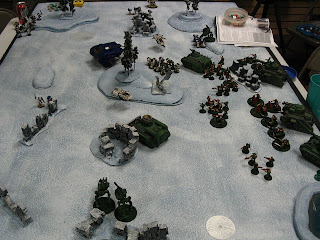 The command squad holding the objective ran back towards my table edge, and the Command HQ's chimera drove forward in front of them, moving into position to cover their retreat from the main body of the marine forces. The heavy armor arrived and reduced the Death Guard squad to less than a "decade." A World Eaters combat squad botched an easy target priority test to kill the objective-carrier and had to shoot at the closer infantry squad, wiping them out. They are indeed the Shaq legion! One of the Death Guard landspeeders pulled up right in front of the guard frontlines and wiped out 6 or 7 traitors with their heavy flamer. Then their dreadnought penetrated the chimera's hull but could not wreck it. The command HQ, including the Warsinger, jumped out but passed their pinning test like champs. The Death Guard and World Eaters infantry charged into combat with the traitorous guardsmen - the World Eaters wiped out their opponents completely and followed up into a sentinel, but the Death Guard were bogged down in the last three members of an infantry squad. They were in perfect position for my Warsinger to bring the pain. 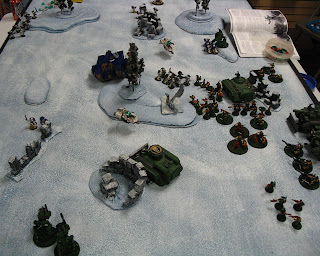 Time left for the legions to stop and retake the objective from the Warsinger's forces were running out. Heavy bolters on one side of my lines shook one landspeeder, and lascannon teams destroyed both weapons on the other. Two of my sentinels came around from cover, one shooting the nearby crippled landspeeder and missing, and the second took a chance shot at the heavily obscured back corner of the World Eaters land raider. Three sixes later: KABOOM! The legions were stunned in the face of such a tragedy, and could only watch as a mighty machine spirit went up in smoke. As the Death Guard began to realize the hopelessness of their situation, the Warsinger pounced and used her mutant powers to turn them against one another. Four Death Guard fell by their own hands, and the legions decided to withdraw. Garro himself was grievously wounded, and the Warsinger and her minions were victorious... for now.

Rescue was a double edged sword for me - the other two special missions could have been total disasters (especially night fight with those Berzerkers and Land Raider). But I also got really lucky when the objective token happened to be the closest one to my deployment. After that it was just a matter of running away from marine shooting, and I got lucky again with some of those World Eater misses (thanks guys). This was probably the most fun week yet of the campaign, but next week promises to be even crazier, with the bombing of Istvaan III. I even feel as if I had some hand in provoking that legendary tragedy!
Posted by bullymike at 9:53 PM

Sweet battle report! Hope next week is just as cool. Love the pictures. Any chance you could take some closes ups of some of the other models?

Captain Garro has personally submitted a Legion Complaint Form (LCF-1040EZ) from the Death Guard to the World Eaters, for their horrific fire discipline. They had the guardman carrying the objective squarely in their sites, but instead decided to paste a tactically useless target right in from of them!

I guess I should have known better that to trust Captain Kharn to do anything more sophisticated than use a can opener in battle...my bad.

Over at Take Free Bitcoin you may recieve faucet satoshis. 8 to 22 satoshis every 5 mins.