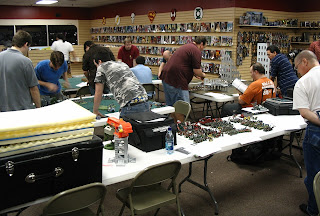 Today was opening day in the Horus Heresy campaign being played out at Battleforge Games, using the ruleset developed by the folks at Bell of Lost Souls. I was promised by Bigred that if I brought my Guard I'd definitely get a game, and that's just what happened. I used the old citywide Tiefwalder army, with the dozer blade switched over to the standard Russ instead of the demolisher. Chris and Amos teamed up their small pre-heresy legions to try and bring to heel what would eventually be one of the most loyal and valuable system of planets in the Segmentum Obscuris.

Way back when, the Walder system was defended by the Gruene Wehrmauer, the extremely well-armed militia of Kronprinz Chamblais, ruler of Hauptwald. And they didn't have Leman Russes or Leman Russ Demolishers, but rather Hauptpanzers and Megapanzers. Who is this Russ guy anyway? And more importantly, who the hell are these highly armored pituitary psychos that are laying siege to Eiswald, the furthest populated planet from the system's sun? Apparently, they're some of the so-called Emperor's finest: Space Marines from the Salamanders and Thousand Sons legions. Shit, they look mean! And brr! We should have brought sleeves! 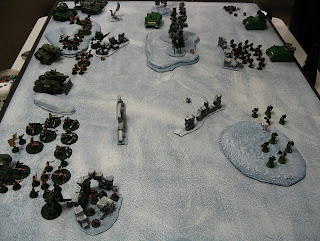 The forces on both sides declared battlefield objectives and set out to secure and control them, ready to open up on anything that moved. As the Wehrmauer moved into position, they were suddenly attacked by a wave of Space Marines along a wide front. Ordnance, rocket, and heavy bolter fire ripped through the defenders, who came about and returned the favor as best they could. The Wehrmauer poured it on thick and managed for the most part to keep the invaders at bay.

One giant warrior, leading a large squad from one of their transport vehicles, actually charged the flamethrower tank and set about it with a giant powered hammer, but was thankfully unable to damage it. His squad was roasted alive for their trouble, though the last heroic survivor managed to stagger off a short distance before Hauptwalder ordnance and anti-infantry fire finished him off.

The Emperor's soldiers were able to mow through the Wehrmauer foot troops with ease, but they were rather ill equipped to handle Hauptwald's fine heavy armor. The Lema... er, Hauptpanzer, went down in the end to a squad of Thousand Sons terminators pulling the ole lightning claw rear admiral, but by then the guns of the Hauptwald pride had reduced the arrogant invaders to a few loose stragglers. Unfortunately, those won't be the last bunch of maniacs this hippy hair, gold-wearing nutbag sends to Walder. The resource-rich system is too valuable an asset to let languish out of his reach. They'll be back.

Word around the solar system is that the Emperor's legions ran into similar trouble on a planet called Mordia. You might want to put some training wheels on those Rhinos before you send 'em our way, big guy! 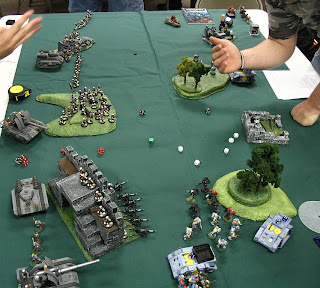 Lookin good! Prehaps my "Lear Hunting Guard" will get a chance to prove themselves this coming weekend too!