I went to a standard tourney at Thor's last weekend with a slightly changed around Witch Hunters list that I for no good reason at all call "the Horsley Chastisement." It's the same Witch Hunters/Inducted Guard units that I've been using so heavily in the last month or two, just a little more streamlined, with a full Inquisitor Lord and heavy bolter servitor retinue, an immolator with heavy bolters, and retributors switched in for the Leman Russ. I did alright, coming in third place overall out of 6 (7 initially, but he left after catching the the first round bye). 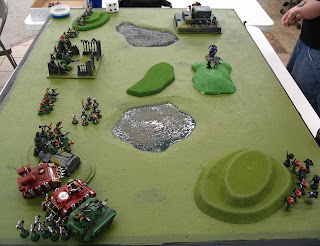 I drew Brian for the first round, who I had first played against at a Battleforge Tourney a month ago. A nice guy with some awesome dreadnoughts and terminators (love those bases), he had some bad luck and things started rolling downhill in a hurry. The mission was Recon, which I don't think I've ever played on the very first round of a tournament. I grouped all my mobile elements together on one flank that was defended by one venerable dreadnought and a small devastator squad, with a largish assault squad hiding behind a hill. After heavily disabling the dred and wiping out the devastators with my own heavy bolters, I moved up the armored units and drew the assault troops out into the open with the armored fist squad. They took shooting casualties and fled on cue, leaving the assault team open to a shooting gallery, led by the canoness and seraphim. The other side received no less than 2 different terminator deep strike assaults, but always managed to wipe the armored troops out before they could dig in. The Eversor led one particular counterassault and took out the last three terminators by himself. The retributors took most of my shooting casualties, leaving the guard lascannons to harrass the dreadnought and tac squad on the opposite temple as well as the terminators that approached on foot. When the smoke cleared, most of his force had been destroyed and several of my most expensive units were in his deployment zone. Witch Hunters win, massacre. 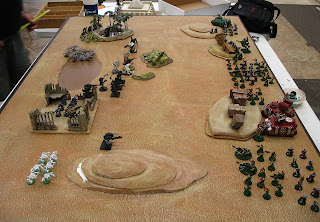 I had watched from a distance many times already as Sean's bugzilla list chewed through anyone and everyone at Battleforge, and for my second game I finally had the honor myself, with Seek and Destroy as the mission no less. He's an agreeable dude, really experienced with this extremely powerful army. Fully guarded tyrants, 6 shooty, extra wound carnifexes, and 6 small teams of genestealers. Fucking retarded. I lined up and hunkered down, stretched out my firing line, and did my best to shoot what I thought were priority targets. One heavy fex went down first turn to the retributors holding the middle, but after that they had terrible luck with shooting and eventually died when the big, fat, T6 wave finally broke on my shore. At the end of the game, I had managed to drop several tyrant guards, weaken or destroy half of the genestealer squads, kill two of the heavy fexes, and kill or wound two elite fexes. I was left with one squad of sisters, a depleted but scoring seraphim squad, and the immolator. The Eversor performed like a champ and dropped in on one of the heavy fexes, rolling 6 extra attacks and inflicting the last four wounds on the big lug. He segued into some genestealers, who chewed him up a bit before he exploded, unfortunately only killing one of them. The canoness also survived longer than expected but only killed a couple of genestealers before they pulled her down, too. Tyranids win, major victory. Robert also played Sean with his Thousand Sons and only lost by a minor victory. I never really thought about it, but AP3 bolters and 4+ invulnerable saves are a decent answer to some of bugzilla's challenges. Plus Robert wields them like a scalpel, or at least he has in my experience. 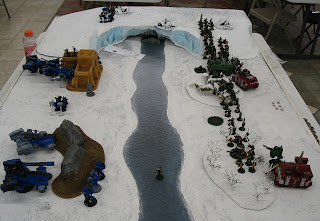 I totally forgot my opponent's name for this last round, but I've seen him around before at Battleforge, nice guy. He had a decent tau mixed force, with two crisis hq's, another crisis suit squad, pathfinders, two stealth teams, two squads of kroot, two squads of firewarriors with devilfish, a broadside, an ionhead, and a hammerhead. Sigh, Tau is never an easy game. You start not taking them seriously and all of a sudden squads completely behind cover are being wiped out by shooting from god knows where. The eversor started the game out in the open, in position to charge into three crisis suits, but my opponent rolled first turn and shot the assassin down before he could do a thing. The exorcist, guard, retributors, and inquisitor did their best to shoot up anything that poked its head out, including the suits and stealth teams, while the canoness, seraphim, and a sister squad rushed across the board, taking out the pathfinders, broadside, and kroot that were holding one of his objectives. We ran out of time or he would have easily reclaimed it with his devilfished warrior squads, which had sat untouched behind buildings for the whole game. He managed to fight my mobile units off though, and I ended up with just two objectives to his one. Witch Hunters win, minor victory.
Posted by bullymike at 9:41 PM

Dangit, wish I would have not been working on Saturday so I could have killed up some stuff with some nids. Woot. hehhe. Who ended up winning?