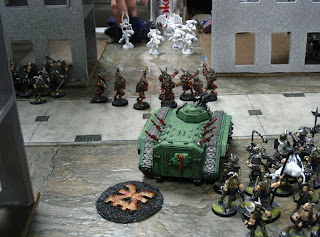 Well, as will sometimes happen when you’re playing a sprawling, ambitious multiplayer campaign, this week’s installment of Warhammer 30k didn’t turn out exactly as I expected. The Blood Angels player didn’t show up, so I went ahead and played a game against a walk-in, namely Nick with his chaos army. I suppose I could come up with an extremely creative narrative to explain why a mixed force of already heavily corrupted Death Guard and Tzeentch Raptors would be fucking about on Signus instead of the Blood Angels, but I’m just not up to it today. In any case, I was grateful for the opportunity to play with the LATD list (thanks again to Aventine for his glorious, livestock-toting mutant horde), and I’ll simply consider the game a warm-up for the real thing next week, if Brian shows up that is. Nick had a bunch of smallish squads in rhinos, mostly plaguemarines, with a couple squads of raptors flying around. The tar pits worked just like they were supposed to, but the new plaguemarines are very tough to beat without power weapons, and the mutants could usually only inflict one or two casualties a turn while taking four or five themselves. As a result, they would inevitably lose combat, fail leadership, and get run down by sweeping advances; this happened with both of the mutant squads as well as the big mutants. The greater demon arrived on my third turn, failed to kill a rhino, and was brought down by two flying sorcerers and their insipid force weapons (at least a mutant squad was able to kill one of them in return). I was able to occupy most of his force until the very last turn when he grabbed a third building to make the game a draw.
Posted by bullymike at 4:40 PM

We'll make sure there are some proper BAs to whack next week. I may even bring in a force of mine as backup just in case.